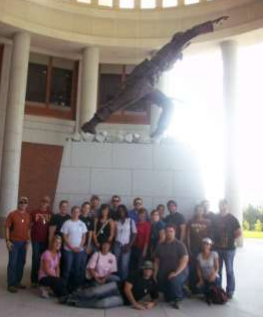 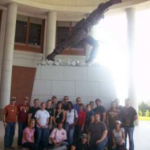 PEO STRI is graduating highly skilled individuals who are willing to take a leap, learn new things and enhance a quality workforce. As part of their education, PEO STRI indoctrinates the interns by getting them close to Soldiers. In a recent “Day in the Life of Soldier” trip to Ft. Benning, the interns had an opportunity to jump from towers and even from an aircraft. Although only two interns had the opportunity to jump from the plane, they were all able to jump from the famed 34-foot tower. The tower exercise is a part of the Airborne School’s Tower Week, which validates jumpers’ individual skill training on properly and safely exiting an aircraft.

One of the interns who jumped from the tower explained her experience. “After a few inching forward and stepping back attempts, I was able to timidly tuck my head and jump out of the tower in a direction perpendicular to that of the zip-line route,” said Nealie Page, an operations research analyst intern. “I’m sure I was screaming, but I was also smiling the whole way down.”

On the day following the airborne activities, the interns visited with the Soldiers and garrison staff to see some PEO STRI products, including the Close Combat Tactical Trainer (CCTT) and the Digital MultiPurpose Range Complex (DMPRC).

The interns received an in-depth briefing on the CCTT, so comprehensive in fact that they are now aware of the Army-level issues the program faces. From the briefing, the interns now know the importance of integrating Dismounted Soldier into the CCTT, the concerns associated with its relocation from Fort Knox to Fort Benning, and the magnitude of making the CCTT interoperable within the live, virtual and constructive training domains.

Although the interns did not get to see the trainer in action, they were able to see one of the CCTTs up close and personal. “I managed to squeeze myself into the gunner seat. I was surprised with the level of detail in the trainer.

[Getting in the CCTT] definitely gave me more of an appreciation for what PEO STRI does for our Soldiers,” said Jon Katz, a contract specialist intern from the U.S. Special Operations Command.

In addition to the CCTT, the interns got a comprehensive overview of the DMPRC, which is weeks away from the Government Acceptance Test. Not only did the interns become knowledgeable about the significance of the Government Acceptance Test, but also about the many issues facing a range of this size (1,600 acres) and funding ($6 million). Ashley North, a contract specialist intern from the U.S. Special Operations Command, noted, “there are things like endangered tortoises that can end up delaying the project or costing the government a lot of money.”

After seeing some of the PEO STRI products, the interns attended a graduation ceremony for more than 400 Soldiers who completed basic training. “Attending this ceremony really helped put everything in perspective for me,” said Ryan Swyers, a budget analyst intern. “I was very moved by these young Soldiers, and it was very touching to witness them see their families for the first time in months.”