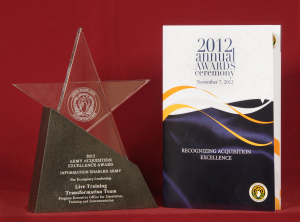 It was a well-deserved recognition for the Consolidated Product-Line Management (CPM) team in the execution of the LT2 focused contract with an objective to provide for the managed evolution of the LT2 Product Line Core Assets and to provide product line support across all facets of the life-cycle for LT2 Product Line teams. Their group is responsible for the horizontal technology integration across PM TRADE and they work closely with not only their Army counterparts, but also the Marine Corps and the Air Force.

“The LT2 is a product line approach to systematic reuse across Army, and Joint live training systems,” said Mike Dillon, LT2 Project Director, and one of the original LT2 project members. “There are common components that many of our live training programs need, and as projects and programs develop from year to year, having this product line architecture in place, in which the developments have already been paid for, prevents those who need these parts from having to reinvent the wheel each time.”

“Think of it like Legos,” said Dr. Jeremy Lanman, Chief Architect for the LT2 program. “At any given point, a project manager can pull different types of ‘Legos’ or components and connect them to build a different training system, because each composition of components gives them a different capability. Basically it’s a set of common and reusable building blocks that are used to provide a capability to the Army for live training.”

“But it’s not just reuse, but also governance, processes, tools – all the pieces to make it happen,” said Lanman. As the lead architect, Lanman manages the day-to-day technical aspects, insuring that all the common tools, processes, as well as software are being governed properly. He works on a daily basis with contractors and developers to make sure everything is coordinated and that the product line philosophy is closely followed.

“We have a very efficient automated product line, comparable to a factory approach,” said Lanman. “Moving into the future and the use of mobile devices for our Soldiers, as well as cloud computing, web based services and SOA (service oriented architecture),” he said, “we are working to position our product line to be enabled so that we can take advantage of all the new technologies – not only with the Army and the common operating environment, but also to improve training and reduce costs.”

Hallmark to the LT2 program is affordability and controlled cost. The LT2 program has been used by more than 16 major Army and DoD live training programs, with more than 130 fielded. There are several shining examples of tremendous dollar savings and cost avoidances, not only by the Army, but also by the Marine Corps and Air Force to meet their requirements ahead of schedule and for significant cost savings.

“This system is being fielded using a control capability based on LT2 components, which ultimately leads to standardization across services. This partnership will allow us to continue the evolution of the RIS Product Line by leveraging development of enhanced common exercise control, data collection, analysis, and After Action Review capabilities that will provide benefits of improved Marine training and reduced cost of ownership,” said Coolican.

The LT2 Exercise Control, a composable set of capabilities, has been systematically leveraged for 13 different products fielded around the globe, delivering more than $94.2 million in cost avoidance for new product development, as well as significant cost avoidance for new equipment training, sustainment, and procurement.

“From a Team Orlando perspective, it’s so important to note that our industry partners have stood up to make this happen and that everybody in Research Park has a part to play in this now,” said Tom Coffman, Assistant Project Manager, Training Devices. “Our team is small, but it’s an extended team, because I look at industry as a teammate as much as Mike and Jeremy,” he said. “We don’t look at the badges, and I believe that’s what makes us successful.”

“There are days when our industry partners come over and help us develop these live training standards, and so they have buy in on the project,” Coffman said. “We’d be crazy to try and do this in a vacuum because we have subject matter experts out there in our community.”

One of the things that really sets this group apart, they believe, is the intimate relationships they’ve forged with their industry partners. But they’ll be the first to tell you that didn’t happen overnight and it’s something that’s been growing throughout the last decade.

Paul Watson, currently the Assistant Program Manager for Soldier Systems for PM Field Operations and Support at PEO STRI, was a part of the team that initiated the concept and is very proud of what has been accomplished since then. “When I moved from PM Warfighter’s Simulation

[currently PM Constructive Simulations] to PM TRADE in 1999, it was to take responsibility for the Common Training Instrumentation Architecture (CTIA) project that was in its very first phases,” said Watson, the first project director for CTIA.

“At the time, CTIA was envisioned as purely an architecture, and not as the basis for product line development. The OneSAF [One Semi-Automated Forces] program was also going down a product line path, and I had many close friends working on that successful program,” Watson said. “It was a natural choice to apply similar approaches to LT2, tailored appropriately for the unique characteristics of the live domain.”

Another pioneer of the project, Jorge Rivera, is now the Consolidated Product-line Management Chief Engineer for General Dynamics’ Orlando-based facility, leading live training efforts and supporting the 2nd Generation Product line instantiation under the CPM contract. Rivera was the first APM for LT2, from 2003-2008, and part of the team responsible for championing and evolving the LT2 product line, providing a foundation to what it is today.

“I reached out to Jorge because he was familiar with building the existing set of products [legacy systems] and was one of the principals assigned to the Joint Readiness Training Center (JRTC) Instrumentation System project,” said Watson. “Jorge provided a rich amount of recent experience in developing a complex LT2 product, and contributed significantly to the overarching LT2 Product Line cost estimates that established the early budgets.”

The focused dialogue with live training experts also led to the early component structure of CTIA, and together with a robust network of user and customer experts, the team completed a rigorous analysis that showed the potential savings and other benefits of the LT2 approach.

“The toughest part of product line development is getting those responsible for delivering individual products to real world customers to do two things,” said Rivera. “Those two things are to wait for the up-front product line architecture development work to mature and to agree that trade-offs may be made in the development of their product in the interest of preserving product line integrity.”

“Of course, the budget was certainly the biggest driver that allowed the forward progress of LT2, not to mention the timing of the start,” said Rivera. “Return on investment and the LT2 business case were always the justification and selling point for the Army to invest into the concept.”

Along with original team members Dillon, Watson and Rivera, others that were involved in the initial development of LT2 and part of the long-term success included Chief Engineer Robert Dixon (currently in PM CATT), Domain Architects Glenn Dillard (PM CTIS) and Will Samper (PM TRADE), and current Project Engineer Angela Pritchard, who is the longest continuous engineer on the LT2 team.

“A lot of people, going back to 10 years ago, helped make this a reality,” Coffman said. “It was not an easy task, and a tough battle getting the cultural acceptance within PM TRADE, then STRICOM, and now PEO STRI, as well as industry, and across our Army.

“The vision of the original pioneers of this concept needed two important recipe elements to prove the worth – time, and success stories over time,” Coffman said. “We are now there. Thus the award recognition in this pause in the journey, and the journey continues for better things ahead.”

Although return-on-investment was an important selling point early on, it wasn’t the only reason for LT2. The product line brings many other benefits to include improved reliability, faster deployment, increased standardization, commonality and interoperability, common user interfaces and significant maintenance savings among others. Additionally the Army is also looking to PM TRADE’s LT2 product line approach as an example of how to implement the Common Operating Environment (COE).

“Thanks to the LT2 vision that was borne here at PEO STRI before 2000, and the hard work and dedication of a few men and women, the Army and Marine Corps are realizing incredible efficiencies in cost and development time,” said Colonel Mike Flanagan, Project Manager, Training Devices.

“The LT2 product line approach has also transformed the way our teams approach training solutions – they’ll never go back to stovepipe solutions,” Flanagan added. “More importantly, our teams can now leverage the best technologies that industry has to offer.”