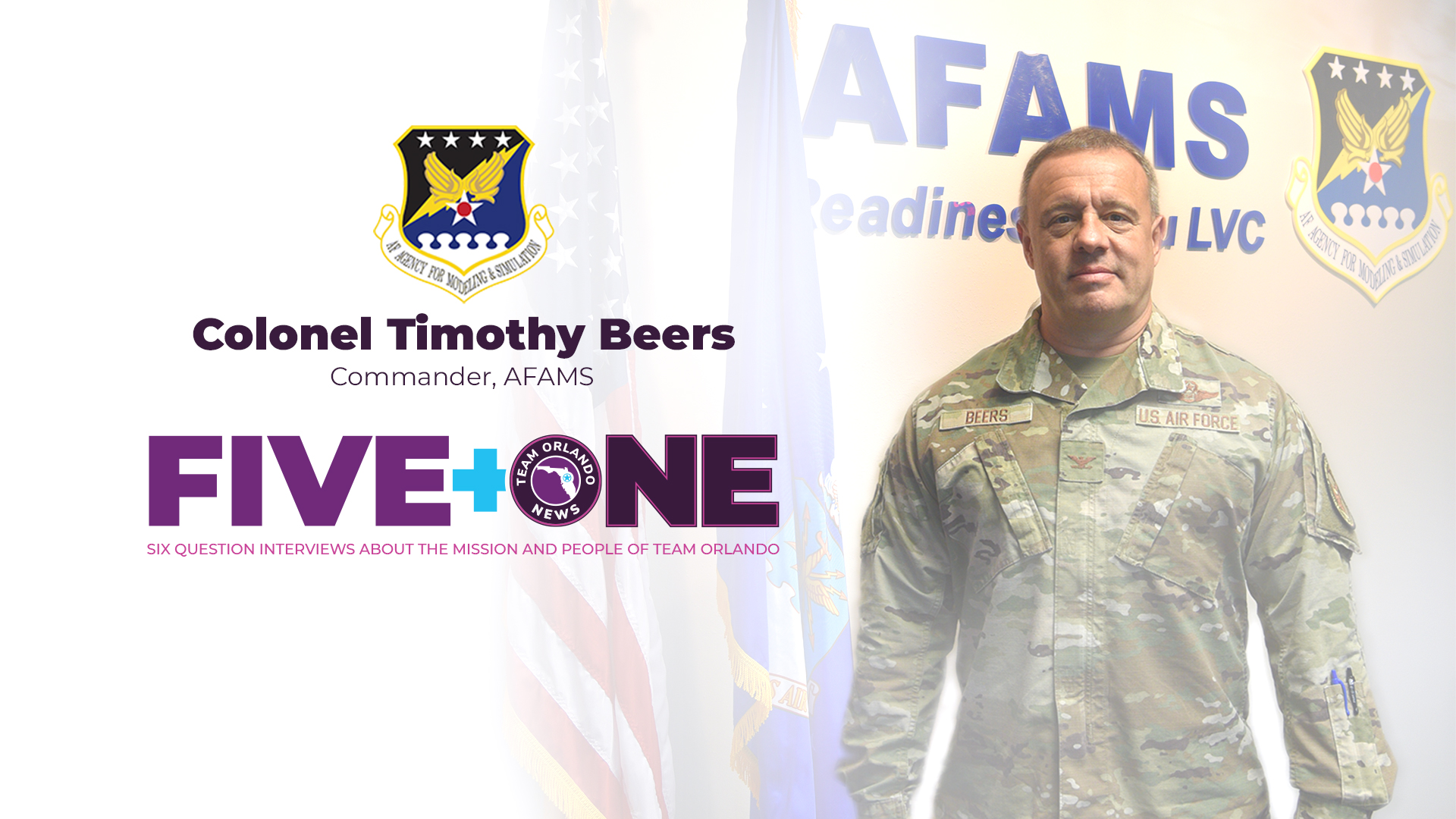 “Our job [at AFAMS] is to make sure warfighters are ready and lethal today for tomorrow,” Beers said. “Specifically, we focus on enterprise mission requirements, conducting modeling and simulation-related studies and analysis, collaborating with our Team Orlando partners, and making sure we’re on the cutting edge of innovation.

Beers took over as AFAMS commander in June 2021. Since assuming command, he has learned new information about the nature of AFAMS, which has influenced how he leads his organization.

“The biggest thing I’ve learned so far in this seat is that AFAMS is not an acquisition organization, we don’t buy or sell anything,” Beers said. “Our primary focus is on making sure that those who have requirements can get in touch with those who have the products. We often find ourselves the ‘middle person,’ or the ‘matchmaker.’”

Like any military organization, meeting the perpetual challenge of readiness for an unclear future is always AFAMS’ top focus and primary challenge on the horizon. According to Beers, meeting that challenge involves taking a step back and looking at the bigger picture of the most likely scenarios, which can help decide what the conflict of tomorrow may involve.

“We need to prepare the warfighter for any fight, anytime, anywhere, and that’s a pretty massive undertaking,” Beers said. “We know a future fight will involve the electromagnetic spectrum and there will be a lot of bad guys and a lot of good guys. It’s going to be a vast engagement, and we know we’ll probably be fighting from a rather distributed versus a centralized way that we’ve enjoyed over the last two decades.”

AFAMS is tracking multiple programs under development, but Beers cites three that he is especially excited about seeing refined further. He expects them to pay huge dividends for warfighters.

“The first is creating a training simulation tool kit,” Beers said. “It will be very useful for the ‘Block 20’ air operations center as it becomes fully operationally capable, and we’ll need to train airmen on that new capability.”

The second program will improve interoperability of existing simulators, which have been used for decades and originally intended for particular platforms and particular needs.

“We’ve purchased air crew training devices in stovepipes over the last 30 to 40 years, and they were always made with different software and different hardware,” Beers said. “Tying them all together is going to be a real challenge, but I think it’s much needed.”

Consistent with the traditional military philosophy of “train like you’ll fight,” Beers said the third program will help provide an environment where simulators will enhance realism to “stress the airmen and give them a taste of what combat will be like.”

Collaboration is often used for improvement of products, programs and future in Central Florida’s modeling, simulation and training community. Its usefulness and practicality is not lost on Beers, especially in preparing to satisfy the requirements that a future conflict will realistically demand.

“There’s a lot of amazing opportunities to collaborate and interact with our Team Orlando partners, in academia, the services, and industry – most notably, to create that common environment that we know we’re going to need in a future fight,” Beers said. “[That future fight] won’t be a single service or even a single nation, it’s going to be joint and coalition partnerships. It’ll require all of our services working together, so we need to start working on interoperability now in an environment we can all share.”

On the personal side, Beers has been a lifelong fan of superheroes since he was a teenager and describes himself as “a Marvel guy.” He is still familiar with the characters and fondly remembers the comic book artists who were popular when he was collecting, with Rob Liefeld, Jim Lee and Todd McFarlane among his favorite pencilers. Beers has enjoyed the treatments the characters of his youth have received (for the most part) on the silver screen in recent years.

“Growing up in the 90s, I became huge fan of comic books, and I started collecting Spider-Man [my favorite character] and Iron Man [a close second],” Beers said. “I had a pretty good collection going for a while, but I had to stop because it just became too expensive a hobby.”