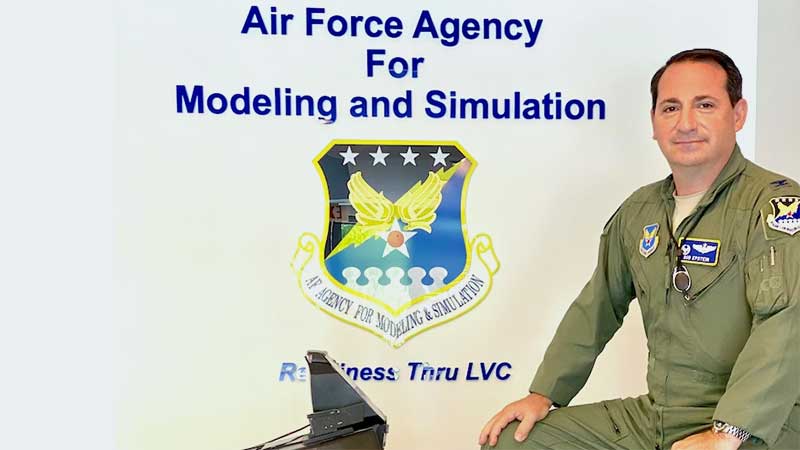 A familiar face in the Team Orlando community over the last four years is Air Force Agency for Modeling and Simulation (AFAMS) Commander Colonel Robert “Hammerhead” Epstein. After a successful tenure leading Team AFAMS since coming to Orlando in 2017, Col. Epstein will relinquish command to Col. Timothy “Bitter” Beers in a change of command ceremony on June 18, followed by a retirement ceremony celebrating Epstein’s 26 years in the Air Force.

“When I first assumed command of AFAMS, it was obvious that they had a vital role in defining the future of synthetic training,” explained Epstein. “So my initial goal was to realign our mission directive to current Air Force Mission Tasks and the National Defense Strategy while simultaneously working to re-establish AFAMS’ organizational credibility.”

Having just come from Washington, D.C. where he worked on the 45th Presidential Inauguration, Epstein re-coined a popular phrase at the time to “Make AFAMS Great Again!” This became his BHAG, his “big, hairy, audacious goal” for AFAMS, even having a hat made up in Air Force blue for his office to continue the play on politics.

Epstein ensured that AFAMS’ focus as a Field Operation Agency under the Deputy Chief of Staff for Operations was on readiness and lethality. He drove the modernization of the Air Force Operational Test & Training Infrastructure (OTTI), focused on creating realistic and relevant training environments while looking for efficiencies around reuse and modularity of models.

“Our job comes down to taking care of the warfighter and ensuring they’re always ready for the night one fight,” he said. 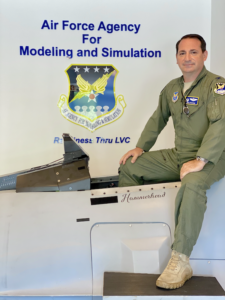 Ask anyone in the MS&T community and they’ll agree that AFAMS has made significant progress under Epstein’s leadership. But he says he feels there is still room for growth.

“I am incredibly proud of the work we’ve done at AFAMS over my time here and it is set up for success, so I’m extremely confident Col. Beers is the right leader to follow me and elevate the Agency and Team Orlando to new heights,” said Epstein.

Since he knew transformations often need to come from both inside and out of an organization, it was important for him to learn all about his fellow Team Orlando partners and each of their unique missions. But at the same time, he was forming an improved AFAMS leadership team while doing a lot of front-facing interviews and appearances to get both the Team Orlando and AFAMS names in front of people.

He boasts about his two strategic hires, first Dr. Alethea Duhon, Ph.D., as the AFAMS technical director, his go-to expert for technical experience. His second, brought in from industry, was Col Eliot Ramey (USAF Retired), an experienced pilot and weapons instructor to serve as the AFAMS deputy director.

“Hiring Alethea and Eliot was probably the most valuable thing I did at AFAMS and something with the most lasting impact on Team Orlando,” he said.

But it wasn’t only that their team was getting out and outreaching other organizations, contractors and attending demonstrations, it was also the effort they made to be active on social media, sharing what they were learning through these outings and telling the Team Orlando story to anyone willing to listen.

“If you have solutions to problems, but aren’t communicating them, then you’re not actually accomplishing the objective of improving training,” Epstein explained. “AFAMS has so many talented people who are the experts in their fields, we realized we really needed a strategic messaging campaign to inform our leadership, industry and academia. By collaborating with our Team Orlando partners, our messaging only grew stronger.”

And once that messaging campaign became part of their everyday talking points, they found they started to hear their messaging coming from other places. They worked hard to solidify their strategic communications and thought-leadership, establishing where leadership and industry should look to find information.

“The impact is the message we’ve been transmitting is now being echoed back by Air Force and DoD leadership as calls for action,” Epstein said. “That’s what I call winning!”

Changes, Memories, and What’s Next

Epstein noted that during his tenure as the AFAMS’ commander and part of the Team Orlando community, technology has been changing rapidly,

“We’re coming up with new and innovative ways to conduct training and produce significantly better results,” Epstein said. “It’s changing at warp speed. I say all the time that we need to let go of the past, and our legacy ways of doing business, and brachiate to take advantage of emerging technology.”

Moreover, he added that the culture of the Air Force still needs to embrace change and quoted its current Chief of Staff General CQ Brown, “We need to accelerate, change or lose.”

But like so many, Epstein acknowledges that change is something that needs to happen on both sides of business – government and industry. Government finds it hard to leave behind the solutions they’ve always known, those legacy solutions, but until they’re willing to let go, it’s impossible to move forward.

“And the business model for how industry makes money needs to look for change, too,” he added. “That means companies have to adapt to the new marketplace.”

As he departs, Epstein is credited for his efforts to have AFAMS improve programs by pushing the experts at Team AFAMS to reimagine the way the Defense Department would conduct joint training, changing the mindset on how we prepare for conflict with near-peer competitors in the 21st century.

When asked, he was especially proud of bringing the $737 million Air Force Modeling and Simulation Support Service contract (AFMS3) back to Central Florida, and pushing new programs like the Command and Control Synthetic Environment for training (C2SET) and the Common Synthetic Training Environment (CSTE), which were both designed to leverage new technology and improve the Air Force’s ability to provide realistic and cost efficient training.

But certainly, one of the highlights for Epstein over his years as part of Team Orlando has always been his involvement in the Interservice/Industry Training, Simulation and Education Conference (I/ITSEC), which takes place annually in Orlando. It boasts itself as the largest modeling, simulation and training conference in the world, and it’s a staple for Team Orlando.

“Each year at I/ITSEC , the joint partners support each other and collaborate,” Epstein said. “The discussions in the quad booth and on the show floor really reinforce that we are one team, one fight. And it gives us the opportunity to meet with and inform industry of warfighter requirements. That’s what I love about I/ITSEC.”

Moving forward, as Team Orlando continues to grow, Epstein said he thinks one of the next big challenges for the group is perfecting how to get more opportunities to collaborate at the action officer level. “We are all working the same problems, so the more team members we can get collaborating, the better.”

Epstein added, “We’re working with our joint partners because every time I’ve flown in combat, I was never the only service, nor only country flying. If we’re not looking at our joint and coalition partners and creating ways for us to work together as a joint team or as a coalition team, we’re going to fail.”

He also said he feels that today there are warfighters who are not getting the training they deserve for combat because we don’t have the ability to create realistic and relevant training environments live, and it’s not being done synthetically yet.

“So, the likelihood of success pretty much goes down to zero if you aren’t able to practice,” he noted. “The message that I brought here (to AFAMS) – it is all about readiness and lethality – our adversaries aren’t going to let us have six months to prepare again for a major conflict. We have to make sure we’re giving our warfighters the training they need to be successful in combat.”

With retirement right around the corner, Col. Epstein plans to stay in Orlando and join the MS&T community that he has spent so much time and energy growing and promoting. But he does this knowing “AFAMS is on an upward trajectory with a positive rate of climb.” He can’t wait to see what great things are next for them with Col Beers at the controls.

“After four years, I look at AFAMS like the phoenix… rising from the ashes and now truly soaring majestically.”