The conference room for the ceremonial Change of Command ceremony was thoughtfully orchestrated by the Air Force Agency for Modeling & Simulation (AFAMS) which attracted a well-diversified Team Orlando crowd, along with dignitaries including representatives from the offices of Senator Nelson, Senator Rubio, Orange County Mayor Jacobs, Congressman Mica, Jeff Atwater, and Daniel Webster. 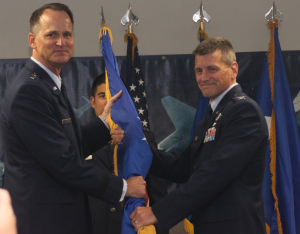 Officiating the formal procedure was Maj Gen James “Rev” Jones, Assistant Deputy Chief of Operations, Plans and Requirements, Headquarters U.S. Air Force, Washington, D.C. “I thank you all for joining us on this tremendous day in the Air Force in the areas of modeling and simulation,” Jones stated. “AFAMS is making a very important impact on our readiness mission and this is an extremely important organization to our Air Force.”

The tradition of the change of command ceremony dates back to the late 1700’s at the reign of Frederick the Great of Prussia. As soldiers followed their leaders into battle, flags were symbolic in keeping sight of their unit to help coordinate their battlefield movements and to give them inspiration to continue fighting. After the battle, if their flag still waved, it meant victory was theirs. Today, the symbolic exchange of an organizational flag still signifies the transfer of power and authority to the incoming commander to lead their people during times of peace and war.

During the AFAMS Change of Command ceremony, Colonel Marcus Boyd transferred the organization’s flag to Colonel Franz Plescha. Colonel Plescha accepted the organization’s flag as a gesture to assume the command of AFAMS. Gen. Jones described how today, the ceremony is principally to thank the outgoing commander and welcome the incoming commander, and his family, as they assume this new mission and phase in his career. “This is simply a piece of paper that lets people know who is in charge,” he stated. “However, the importance of the training here is extraordinary and the leadership under Col. Boyd to carry out the mission here for AFAMS helped shift their focus to operational joint partners and take training to new levels.”

Col.Boyd was accredited for assisting with the overall stability of AFAMS. He oversaw all aspects and requirements for the organization for it to remain exquisitely ready in support of the mission. His value of family and overall demeanor were evident in everything he did. “I never thought this day would come,” Col. Boyd said lightly to the crowd. “This event is a family reunion. We are more than just friends. We are people who come together to get the job done. We are cousins, brothers, sisters, and this is a golden opportunity to thank ‘my family’ and welcome a new family member.”

Col. Boyd talked about the overwhelming support here at AFAMS and the surrounding organizations. “You are a winning team of government, industry and academia,” said Boyd. “AFAMS, you are my closest kin. Your deep passion to support the warfighter and to be the best innovator will always be highly regarded and evident around the world.”

Gen. Jones transitioned the ceremony to welcome the new commander. “While it’s hard to say goodbye in moving the mission forward, we are extremely fortunate to welcome Col. Plescha,” said Gen. Jones. “His leadership at AFAMS will strengthen our capabilities and training necessary to support national objectives and military strategy.”

Col. Plescha, callsign “Baron”, is well versed in everything that the AFAMS mission supports. He has helped train 38,000 people and served at the operational level of war by providing live, virtual and constructive environments for realistic exercises. “As the new guy, I don’t have yet much to say,” he said gracefully. “In order to make a difference, we have to be ready and I feel we have reached a perfect storm for readiness. The technology is at a new level and I suspect that what we have here is truly the future of readiness training.”