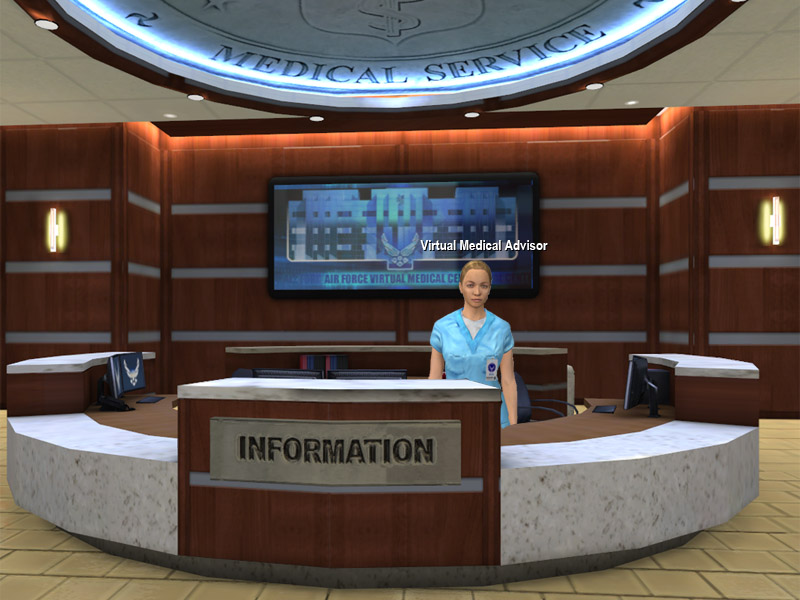 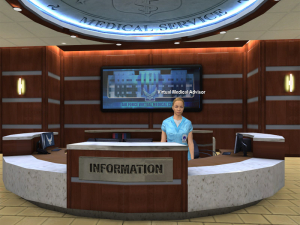 The Virtual Medical Advisor is an avatar character with access to thousands of frequently asked questions and answers.

Eighteen months ago, Lt Col Manny Dominguez of the Air Force Medical Modeling and Simulation Training (AFMMAST) program was charged with helping the Air Force Medical Service develop an IT portal for all medical simulation services. With simulation centers all over the world offering all kinds of simulation opportunities it became readily apparent that there was a great need to share best practices and training procedures across the centers and provide a centralized service to patients and providers.

Lt Col Dominguez created a strategy, identified the virtual training resources from all branches of the military and focused on what overlapping data could be minimizedthrough consolidation of efforts. He also determined that the information would have to be standardized and relatable to many viewers and also be as virtually sophisticated as the information the portal would be supplying. In order to develop an overall virtual reality strategy, the next step included determining what products were available in the industry and identifying potential partners that would help them to achieve this.

The first step involved developing the AFMMASTPortal. This website portal would be the access hub for all things related to medical simulation training and the launching point for evolving virtual services. As the portal unfolded, its first mission would be to serve as the ‘go to’ place for AF providers. Visitors would have access to all the latest in best practices, participate in online training course, experience medical gaming, join a discussion board to exchange ideas with peers or view training scenarios from AF simulation centers throughout the world. Additionally, each of the simulation centers would have their own area of the portal to host and provide their unique, center specific content. Providers could also browse through the portal’s Cybrary (an online medical reference library created for providers and patients) and watch various training videos that have been rated by viewers.

Meanwhile, Lt Col Dominguez received a call from the AF Surgeon General, who had recently visited the Mayo Clinic. The SG suggested that Dominguez take a look at their virtual Diabetic Clinic. This clinic was a place where diabetics from all around the globe were talking with one another in a virtual world, discussing their disease, trading best practices, and sharing in a forum where they could rely on their own similarities and experiences to learn from one another.

The Surgeon General saw something in this clinic he felt could work for the AF and Dominguez was soon changing directions to add another dynamic to the portal. As the idea of a virtual world took hold, it became apparent to all that limiting the service to just one clinic, as originally conceived, would not suffice.Instead, an entire medical center that encompassed multiple clinics such as Diabetes, Orthopedic, Cardiovascular, and a host of others would be to everyone’s best advantage.The Air Force has 72 hospitals around the world, and now Dominguez and his team were creating the 73rd Air Force hospital, only this one was online.

The Virtual Medical Center (VMC) would differ from the original portal that was initially aimed at providers, and would now include a patient-based site.Patients and providers alike would have access to information, self-help tools and wellness tools, as well as opportunities to participate in group discussions related to their particular area of interest. Areas of the VMC would cater to diabetes care, cardiovascular health or any one of the many future clinics (totaling close to 30) scheduled for stand up.

As the AFMMAST portal and VMC idea grew and developed, so did the list of offerings. Currently the team is building their first AFMMAST mobile application store for the portal. Mobile apps providea wealth of medical games, useful tools and handy reference material to both providers and patients. “We don’t invent them all, we centralize them all.” Dominguez said about the store. Amazingly enough, all of this has come together in less than 18 months.

The VMC will be staffed with fulltime nurses and doctors that will be able to answer questions and respond in real time when needed. Patients can opt for a live e-Consultation with this medical staff whenever they need. For general questions there are also Virtual Medical Advisors (VMA’s) placed strategically throughout the VMC. The VMA is an avatar character with access to thousands of Frequently Asked Questions and answers. Users within the VMC will be able to ask the Advisor questions and get answers.

In his research, Dominguez spoke with many physicians who expressed some concern because, as in a real office, they feared they would have patients waiting in line for two hours to ask a pretty simple question. The physicians felt like their virtual time would be better spent with their patients who really needed that one on one time with a more detailed exchange.

“So here’s a solution,” Dominguez suggested. “For all those quick answers, patients can log in from home or from an iPad on a beach, interact with the Virtual Medical Advisor or get an e-consult, and they don’t have to drive 50 miles to the base and wait for two hours.” It’s a win-win for the patient and the physician.

“We’re going to continue to integrate the lessons learned through our Beta testing over the next three months or so, with a group of diabetic patients, as well as some of our providers.” said Dominguez. “They are going to give us feedback and tell us what’s missing, what they would like to see, and we will integrate those items and make the product more robust as the years go on.”