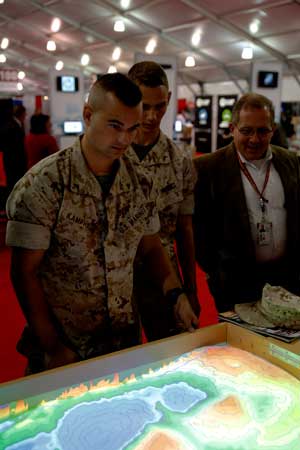 At the Modern Day Marine expo at Quantico, Va., in September, there was a lot of buzz about an Augmented Reality Sand Table (ARES), being developed by the Army Research Laboratory (ARL) Simulation Training and Technology Center (STTC), a division of the Human Research and Engineering Directorate. But what may have seemed odd for some — the Army showcasing a potential new technology at a Marines gathering — was nothing more than a day’s work for Team Orlando. 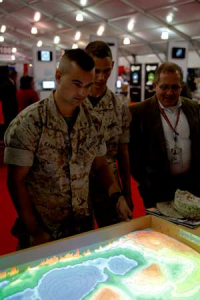 Team Orlando is the coalition of Central Florida-based military, federal government, industry and academia, united around a common cause: improving human performance through modeling, simulation and training. Many of the military Services work with each other on a daily basis, sharing ideas and resources and, in many cases, having offices in the same buildings. They regularly attend meetings, have briefings and attend demonstrations across the services.

Chuck Amburn, senior instructional systems specialist at the center, said STTC frequently holds briefings for service partners, industry and other agencies like Department of Homeland Security. That was how Bushika and PM TRASYS initially learned about ARES.

“The Office of Naval Research (ONR) heard about ARES, too, around the same time, and came down to see it because of their work with the Basic School at Quantico. They are looking to identify new technologies that might help with officer training there,” Amburn said. “Both PM TRASYS and the Office of Naval Research immediately saw the value of the research and became vocal advocates. ONR even funded the development of a second table, which we took to Quantico in September for evaluation.”

The Augmented Reality Sand Table combines readily available and relatively inexpensive commercial off-the-shelf technology to upgrade one of the battlefield’s oldest tools to a modern-day, techy version. Current sand tables serve as a miniature 3-D mapping system used for military planning and war games, where notecards and string represent vehicles, roads or streams. The ARES technology projects images onto a tabletop box of sand, using a laptop connected to a projector and Microsoft Kinect, a combined microphone and camera device used with video game systems.

“We’ve seen this sand table, and our Marines were well impressed by this capability,” Bushika said. “It provides a faster and more robust capability to visualize those candidate areas of operation. ARES can give more detail and a more precise replication of a given area. It’s something we’re leveraging because we have the opportunity to learn and have insight into what everyone is doing.”

Those insights to which Bushika refers are the ones that come from the partnerships and collaboration that exist within Team Orlando. The level of productivity and success stem from pooling the accomplishments of each Team Orlando member for a greater impact of the whole.

Seeing the possibilities for ARES, Bushika became part of a Marine Corps Systems Command effort to bring ARES from a potential technology to a reality. Part of that effort is conducting limited-user evaluations, which Bushika explained are planned to take place at the Basic School on Quantico.

PM TRASYS also demonstrated another table developed by STTC at this month’s Interservice/Industry Training, Simulation and Education Conference, as part of the Joint Live-Virtual-Constructive story.

But before ARES transitions from a proof of concept, Bushika and Amburn have to be sure the Augmented Reality Sand Table is necessary. “We have to determine if this is worthwhile or not,” Bushika said. “We know Marines build these sand tables to collaborate during planning, but we don’t know if it’s going to be worthwhile. We hope to help STTC in this effort by letting Marines get their hands on it.”

The ARES team, which also includes Dignitas, Design Interactive and the University of Central Florida (UCF) Institute for Simulation and Training, is conducting user needs analysis at Quantico and Fort Benning, Ga., which will feed in design recommendations.

“We are organizing the first experiment with UCF ROTC to determine the efficacy of ARES as a platform for visualization of 3-D terrain,” Amburn said. “Additionally, we are partnering with the U.S. Military Academy at West Point to bring a table there for evaluation as a collaborative scenario generation tool.

“This project, in addition to its research and relevant value to the military, tells a great story of synergy–academia, industry and two service partners working together,” Amburn said. “The bottom line is that we are fortunate that we have so many collaboration opportunities right across the street.