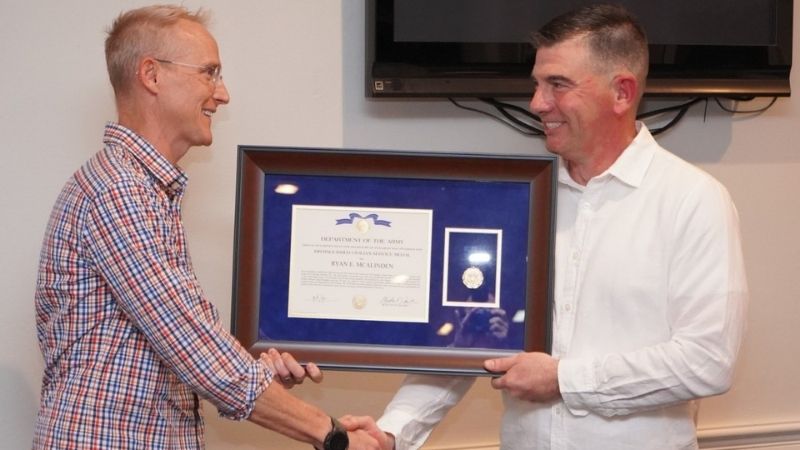 Ryan McAlinden received the Dept. of Army Distinguished Civilian Service Award at an informal ceremony alongside his STE colleagues.

“This is a really big deal,” said Brig. Gen. William R. Glaser, Director of the Synthetic Training Environment Cross Functional Team in Orlando, Florida. “This award would normally be presented in Washington D.C. by the Secretary of Army, but due to pandemic precautions, we get to present it to you here.”

McAlinden’s contributions on the OWT program led to the technology being used in a variety of both operational and training environments to better equip and prepare Warfighters when they get on the ground.

Glaser said when the Secretary of the Army calls on you by name to provide data, that is pretty remarkable. Ryan excels at all he does, and we are proud to have him on our Synthetic Training Environment Cross Functional Team.

“Mr. McAlinden’s pioneering vision directly resulted in the rapid development of the One World Terrain capability,” part of the citation read. “His Superb leadership propelled it to the gold standard for Solider-centered 3D data.”

The Army Distinguished Civilian Service Award is the highest award given to career Army civilian employees. There are about five recipients selected each year across the Army through competitive nomination.

“I am so humbly honored to receive such a prestigious award,” McAlinden said. “This was truly a team effort, from everyone on the Cross Functional Team and the Program Executive Office, across Science and Technology and out to our partners at the National Geospatial-Intelligence Agency and the Army Geospatial Center and of course the Soldiers. Everyone came together to try a new way of representing terrain, and though there were rocky moments along the way, in the end we all kept our vision and purpose. Thank you again, words can’t begin to express my appreciation.”

OWT provides a current 3D digital representation of the surface accessible across the Army’s training, operational and intelligence platforms. It accurately depicts areas of interest (AOI) around the globe in support of unit training, simulation, rehearsal, analysis and mission execution.

The capability allows Soldiers to rapidly collect and fuse terrain data from various sources and ingest it into system platforms giving unparalleled training and mission rehearsal capability for units and commanders accurately replicating the complexities of the operational environment (OE).

OWT and its technologies are in hands of Soldiers today including elements of the Army, ARSOF and USMC as they conduct training at various home station locations that the STE uses and refine to deliver this critical capability.