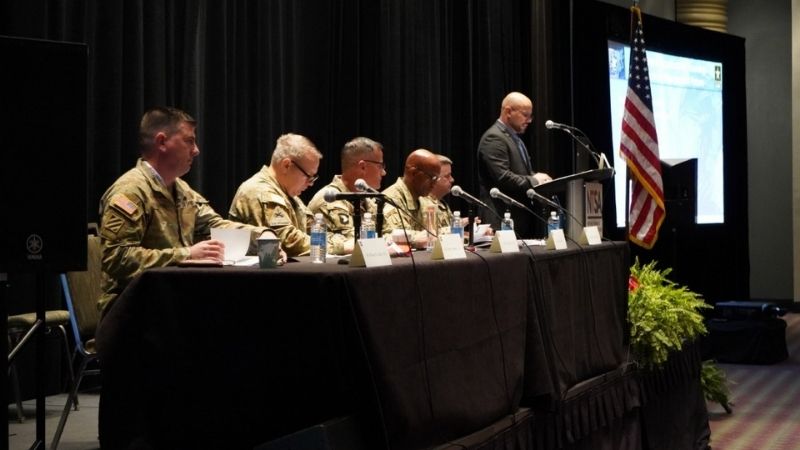 ORLANDO, Fla. — Utilizing a Synthetic Training Environment as the Army’s future training capability was the theme for the Modernizing Army Training Mission and Operation panel at the annual Interservice/Industry Training, Simulation and Education Conference in Orlando, Florida Nov. 29-Dec. 2.

A panel of five U.S. Army generals discussed the future of the STE during the I/ITSEC 2021 during one of the Signature Events forums.

Maj. Gen. David Francis, commander, Army Aviation Center of Excellence, Fort Rucker, Alabama, noted that Army Aviation has used and will continue to use simulations as an integral part of the training paradigm.

Francis discussed how leveraging emerging technologies will enable Army Aviation the same fidelity of simulation at a much lower cost.

“At the end of the day, what we have to be able to do is deliver home station training to the point-of-need to replicate the challenging environment of the complex environment that we will be facing in the future,” Francis said. He continued, saying simulations need to use the same Modular Open Systems Architecture approach to replace stovepipe systems that cannot talk to each other.

“That is not the way we train in the U.S. Army,” Francis said. “We provide combined arms capability to the joint force and we have to be able to train that way. Not just live but in simulation.”

“We are looking to move from a network-centric to a data-centric environment to support the STE (Synthetic Training Environment),” said Rey. “We will have to have cloud capability, AI (artificial intelligence) and machine learning. Fundamental to that is standardization.”

Rey said as data move across that agnostic transport, a multilayered security architecture is going to be required.

Brig Gen. Larry Burris, currently serving as the director of the Soldier Lethality CFT and as the commandant of the U.S. Army Infantry School at Fort Benning, Georgia, noted that his role as Chief of Infantry informs most of his cross-functional role.

“While we modernize the Soldier and his or her equipment, we must modernize our training with Soldiers involved every step of the way, said Burris. We must apply the concept of Soldier centered design to training and the Synthetic Training Environment will make that more possible, more effective and more efficient.”

Burris said modernizing the close combat force to ensure overmatch against any adversary is essential before asking participants in industry for rapid concurrence between tactical and training systems.

“We need to have common standards, interfaces, and host hardware and equipment, Burris said. “As we develop and field new capabilities to our Soldiers, we must strive to protect embedded training capability that can be used at home or to rehearse with while deployed.”

Brig. Gen. Charles Lombardo, deputy commanding general of the Army’s Combined Arms Center-Training (CAC-T), said the job of CAC-T is to develop leaders and drive change in the Army and simulations have to be distributed, persistent and interoperable.

“We have got to make every round fired count, whether it is live, virtual or constructive, train as many echelons as possible,” said Lombardo. “What the STE will provide us and what you can help deliver is a natural persistent environment where we can do that every month.”

Brig. Gen. William Glaser, director of the STE CFT, said that the aim of the Synthetic Training Environment is to empower leaders to prepare for war as the Army is under a persistent state of modernization, while the STE is trying to modernize our Soldiers through synthetic training.

“The one asymmetrical advantage that the United States Army has always enjoyed and must continue to retain is our trained Soldiers and prepared leaders,” Glaser said. “What we don’t have is an ample amount of time to do this.”

Glaser said Soldier and leaders want easy to use solutions so leaders spend less time planning and more time for sets and reps.

“In order to do this we need to have this open architecture. It needs to be flexible. We need to allow leaders to go in, tinker and create training support packages so that we can train against specific objectives laid out by Army standards,” Glaser said. “It needs to easy to use, it needs to be intuitive as well as user friendly and it needs to be affordable.”