As New Leader for PM ITTS, Donovan Ready to Get the Job Done

Home » As New Leader for PM ITTS, Donovan Ready to Get the Job Done 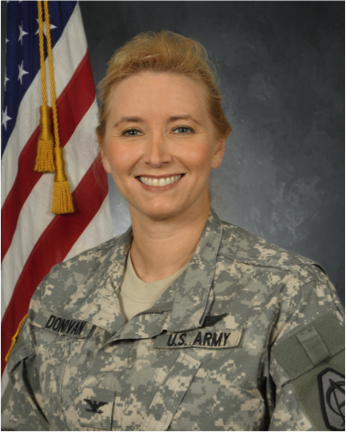 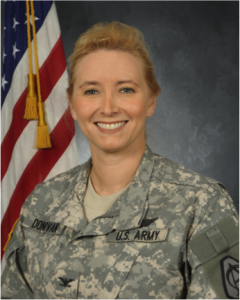 Throughout her childhood, Colonel Sharlene Donovan had a long list of considerations of what she wanted to be when she grew up: paleontologist, ichthyologist, thoracic surgeon. She also had aspirations of becoming an astronaut, but after high school graduation, while many of her friends left town to attend college elsewhere, Donovan made the decision to attend college close to home, allowing her to help care for her terminally-ill father.

One of her best friends who attended West Point encouraged Donovan to consider attending one of the service academies. Her friend advised that she could become a pilot and then explore avenues to becoming an astronaut. Donovan recognized the opportunity and felt that even if the path to becoming an astronaut didn’t materialize, the Army offered an array of alternative career options. She never planned to stay in the Army 22 years; making it a career was something that developed over time.

As PEO STRI’s new Project Manager for Instrumentation, Targets and Threat Simulators (PM ITTS), Donovan represents a growing number of women taking on important leadership roles across the Army. In her newest assignment, Donovan says the opportunities that she has now are because of those who paved the path before her. “I hope to move that path forward in some way,” she said.

Although she has been fortunate not to have experienced serious challenges and biases, there have been some hurdles throughout the years. “When I first started at West Point, women were still somewhat of a novelty there, so there were some issues along the way,” she said. “By not focusing on that and just demonstrating performance and competence, I think I’ve been able to overcome most of the challenges in front of me.”

Donovan received a Master’s degree in Interactive Simulation and Training Systems Design from the University of Central Florida, and immediately thereafter was assigned to PEO STRI as the Assistant Program Manager (APM) for Special Operations Aviation Combat Mission Simulators. She oversaw the simulation and training devices for the 160th SOAR(A), the Army’s special operations unit that provides aviation support. Her responsibilities included making upgrades to the current MH-47 and MH60 simulators, deployable training devices, and procurement of the A/MH-6 “Little Bird” full motion simulator.

One of the more challenging, yet rewarding times in her career was following her first assignment at PEO STRI. After her APM assignment, she was assigned to Human Resources Command as an assignment officer, and subsequently became a Lieutenant Colonel PM back in the Special Ops community as the MH-60 Product Manager. Gaining acceptance in that community was difficult “because they don’t have a lot of women, and they certainly don’t have women pilots,” Donovan said. “Getting into, and obtaining the credibility of that community, was my toughest challenge, but my greatest reward.”

Now back at PEO STRI, Donovan manages PM ITTS, an area that has a day-to-day mission of supporting test instrumentation, aerial and ground targets and threat simulators. “We provide materiel solutions and services that look at the weapon systems under test and determine how they’re performing,” Donovan said.
PM ITTS acquires test equipment, evaluates test and training, and even models the opposing force, essentially playing the ‘bad guys’ in the fight to help get the ‘good guys’ prepared.

During certain phases of the life cycle of products, the systems need to be tested – either at a developmental phase when they’re being built or in an operational phase. The products that PM ITTS develops assess the products that other programs develop, and provide data and feedback that helps the people who are using them. “PM ITTS is like a mirror. You look at PM ITTS, the mirror, and it tells you what you look like,” Donovan explained.

Although she already feels that PM ITTS is a close frontrunner for her best assignment, outside of the Special Operations assignment that was uniquely challenging, Donovan notes that her assignment as HUNTER UAV Company Commander was her most fulfilling tour. “As a company commander, I was able to interface directly with Soldiers, and really impact Soldiers,” she said. “We were on the cutting edge of UAV technology at the time, and we were highly successful. We implemented policies and training procedures that are still in use today,” Donovan said. “I found that to be my most rewarding assignment.”

Donovan earned a Bachelor of Science degree in Russian, German and French from the United States Military Academy, an education that included a broad core curriculum focused on engineering disciplines. “Any education that broadens your ability to think critically is valuable,” Donovan said. In reference to her study of languages, “I’ve always felt that the ability to communicate, whether it’s in a foreign language, written correspondence, or just speaking to people, is one of the most valuable tools one can have.”

Donovan says that a good part of her career has been spent in the Joint military community, and she understands the need for the Services to work together, noting that PM ITTS has been a “crossover hit” with other Services in the past and has a lot to offer the Team Orlando community. “I definitely grasp the need to be Joint, reduce redundancy and find common solutions, or at least share common knowledge, so we’re not spending additional money for things that have already been done,” she said.

Donovan is married to retired U.S. Air Force Colonel and Air Force Academy graduate Christof Cordes. When asked if there is an Air Force–Army rivalry in their home, she joked “we’re naturally adversarial during football season!” Despite this rivalry, Donovan adamantly states that her husband is “a gentleman and an honorable man. Regardless of what service he was in, it wouldn’t make any difference. He’s a great partner and a great companion.”

Although this pilot loves the thrill of flying, Donovan admits she likes to be a bit more terrestrial when she’s off duty. Among her interests are rollerblading and hiking. Once a competitive racquetball player, she also enjoys wine culture and loves to read. “I always have a non-fiction and fiction book going,” she said. “It’s an expansion of knowledge, and escapism. I enjoy throttling back and going into a different world.”

Donovan said that for her it’s about performance, doing her best, and finding balance. “Sometimes we push too hard and work too much, and I really strive to find balance and that’s hard to do,” she said. “I want to get to my sunset years in peace, not in pieces.” But at the same time, she added, the mission must get done. “There are Soldiers who need what we provide to them, so I will never compromise what they need for my personal time,” said Donovan.

“I was handed a gem,” Donovan said of her PM ITTS assignment. “I hope I’m what these people need to get the job done and lead them to where they need to be.”