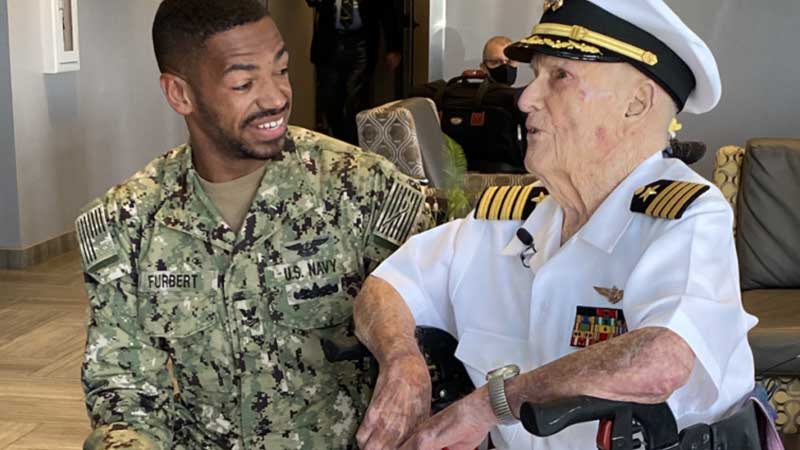 It’s been a busy March for Naval Air Warfare Center Training Systems Division leaders, CAPT Tim “Octa” Hill, commanding officer, and CAPT Dan “Stuckey” Covelli, executive officer. It kicked off with a visit from Chief of Naval Operations, Admiral Mike Gilday; was followed by a well-attended and packed virtual PALT; and finally, they were part of a once-in-a-lifetime event to recognize a great WWII Navy hero and a pioneer in the early days of helicopters.

On March 11, CAPT (Ret) Richard “Robbie” Roberts, was recognized with the Naval Helicopter Association Lifetime Achievement Award. Presenting the award was CAPT Richard “CHIP” Whitfield, commander, Helicopter Maritime Strike Wing (aka Commodore) and CAPT Ross “JR” Drenning, commanding officer of the HSM-40 Airwolves. The two captains and eight aircrew joined the event from Naval Station Mayport in two MH-60R helicopters to present Roberts the award and command coins, and give him a tour of the aircraft. The Central Florida Navy League facilitated the event. Both Hill and Covelli, who have both met with and gotten to know Roberts during their assignments in Orlando, made time to attend the small gathering to pay homage to a great American hero and represent Orlando’s active duty military, as well as the entire Team Orlando community.

“I’m honored to have the privilege of knowing CAPT Roberts,” said Hill. “As a Naval aviator, he is a direct connection for those of us who serve today to the accomplishments made possible members of the Greatest Generation who served before us.”

Hill, in particular, shares a connection with Roberts because his aunt served as an Army nurse, and was part of the Angels of Bataan, a group of 78 Navy and Army nurses who were captured and imprisoned in and around Manila, and served as a nursing until while prisoners of war.

“For me personally, CAPT Roberts’ time in the Philippines at the onset of WWII is a connection to my own family’s history, making it that much more valuable of a relationship,” Hill added.

Roberts spent much of his life as a naval aviator. He retired a captain and was awarded fifteen medals during his career including a Bronze Star with combat V and nine campaign stars for combat in the Pacific theater. After WWII, Roberts transitioned to the then-new world of heavy lift helicopters. He developed much of the doctrine in use today. He is quite the storyteller and over the years has frequently captivated any and all audiences with his stories, and today, even at close to 107-years-old, it’s no different.

“I have had the great privilege of knowing Robbie since he was 100 and count him as close friend,” said Captain (ret.) Andy Mohler. He was absolutely thrilled by the honors paid to him by this day, especially to be on the flightline again. His contributions to our Navy and his positive attitude about life are inspirational.”

On the third day of WWII, Roberts was shot down by three Japanese Zeroes just after taking off. While attempting to secure the PBY wreckage in a polluted lagoon, he contracted a potentially fatal skin disease that required a painful hospitalization.

He retold the group in attendance a piece of the story, sharing his experience. “Three Jap Zeroes – where they came from, I do not know. All I know is one of my better gunners said ‘here they come.’ I had a lieutenant for a co-pilot; he could not fly the PBY because he had been flying SOCs. Anyway, he told me that, and I put it on full power and turned the PBY directly into the lead plane coming down. I was so busy flying I couldn’t tell them any other instructions.”

Also in attendance were Central Florida Navy League board members, a Navy League of the U.S. representative, and supporters of the Navy League from Cole Engineering and Cubic Corporation. 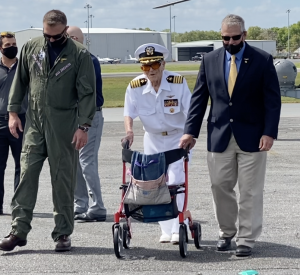 Roberts entered the Naval Aviation Cadet Program at the Naval Air Station in Sand Point, Washington in September 1937. He completed Flight Training in Flight Class 116C at the Naval Station, Pensacola, Florida in mid-July 1939, and on, Aug. 1, 1939, he earned his Wings of Gold and was commissioned an Ensign in the U.S. Naval Reserve.

His first assignment was in Patrol Squadron 23, Pearl Harbor, Hawaii, as the Squadron administrative and personnel officer. In July 1940, he was transferred to Squadron 101, Sangley Point, Philippines serving as the Squadron engineering officer. In November 1940 he was commissioned as an Ensign in the U.S. Navy (active duty) earned his designation as a Patrol Plane Commander in the PBY Catalina and served as the Assistant Operations Officer.

When the Japanese attacked Pearl Harbor on Dec 7, 1941, they also attacked all over the Pacific including Sangley Point, Cavite, and Manilla. As one of the most experienced PBY pilots, Roberts was immediately drawn into sustained combat operations, being shot down himself on day three. However, he and his crew repaired the severely damaged PBY after three days and lived to fight on. Continuous bombing of the Navy bases destroyed nearly all the aircraft and Roberts was hours away from potential capture by the invading Japanese Army.

Roberts flew his last operational PBY on Dec. 24, 1941, a 14-hour-flight in a damaged plane without any electrical equipment, and he remained with Squadron 101 until it became part of Patrol Wing 10. Roberts was promoted to Lieutenant Junior Grade (LT JG) in February 1940 and returned to the United States in the spring of 1942

Roberts served a short time at the Naval Air Station in Pensacola, Florida as a check pilot and was then ordered to the USS San Jacinto (CVL 30) as V2 Division Officer in charge of safely launching and landing all aircraft. His next assignment was as Assistant Air Officer. After 2 1/2 years at sea, he was assigned as Air Officer of the USS Anzio (CVE 57). The ship was on ASW operating 24/7 – day and night off the coast of Japan.

Roberts was Flag Lieutenant for Vice Admiral Alfred Eugene Montgomery at three different duty stations. He served three tours of duty in the Pentagon and served a tour of duty with the Air Force Intelligence Center, Commanded Helicopter Squadron 2 and the Fleet Intelligence Center Europe. He attended the Air University, Air and Command Branch and the Armed Forces Staff College.