CAPT Covelli: We Are Focused on Raising the Bar and Bending the Curve

Home » CAPT Covelli: We Are Focused on Raising the Bar and Bending the Curve 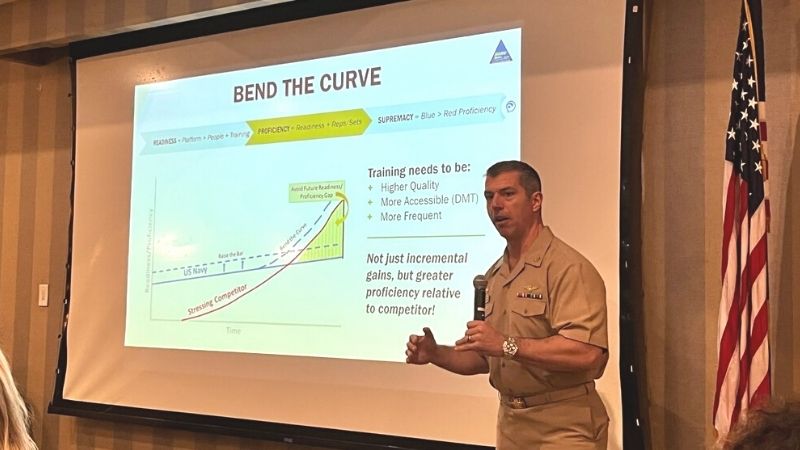 Naval Air Warfare Center Training Services Division (NAWCTSD) /NSA-Orlando Commanding Officer Capt. Dan “Stuckey” Covelli discussed a variety of Navy “news and updates” as the guest speaker for the first 2022 monthly luncheon for the Central Florida Navy League. He set the tone of his presentation by reminding attendees of the important role the Navy plays.

“Information and commerce – we are dependent on the sea for those,” he began. “That is why it is very important we have a Navy that can protect the U.S. and her allied interests. We have to be ready – ready to preserve the peace and to fight if needed.”

Bringing it closer to home and Central Florida, Covelli reiterated the mission for NAWCTSD is to provide training and services to the fleet, and to ensure those devices are ready. To continue to meet its objective, he is challenging the NAWCTSD team to focus on “raising the bar and bending the curve.”

“We achieve this through new technologies to advance the ecosystem we have here,” he explained. “Collaboration is key amongst the services here, as well as industry and academia. I would hate if the best thing since sliced bread came out and then have AFAMS or the Army come out with the same thing the next day. That would be a waste of money. Collaborative efforts give DoD more money to do with what they need.”

“If there’s a device out there that one of our partners is using, odds are NAWCTSD made it,” he said.

A lot was learned during the initial Pandemic in 2020 he said, as he described the time as a little like mass hysteria with dogs and cats living together. NAWCTSD folks couldn’t travel but during that time, they found ways to be adaptive and maximize their productivity.

“We used collaboration tools and our onsite engineers to test and assess devices,” he said. “This allowed us to do things quicker and cheaper. We produced higher quality training and more throughput, which meant a faster time to training,” Covelli explained. “We also saved money, which enabled us to do other things we wanted, and we did it on a quicker schedule because we didn’t have to wait for travel delays.”

During this time, NAWCTSD had 1.2 billion on contract, but in the end, it all comes down to what did they do for the fleet? And at the start of the pandemic, it was not perfect, but they found ways to achieve success.

One example the skipper shared was one of the aviation products in which they used distributed mission training to re-qualify senior aviators, including five Air Interdiction Mission Commander quals and one command and control 2 MC qual, as well as 7 MC Under Instruction events to make sure folks were ready to deploy. “Readiness,” Covelli said. “They would have not been able to do that without that training.”

As part of this push, they did 22 large force exercise, almost 400 air crew exposed to advanced tactics in the distributed mission training environment. “You can do things in the simulator that you couldn’t do before,” Covelli explained. Through these opportunities, they get credit that they’re capable – “not just that they’ve done it, but they are capable of doing something.”

Another example presented by the Skipper was the work that NAWCTSD did with NADTC for the pre/post Fallon work. “When you go to Fallon for the first time, you shake your head and say to yourself, ‘Don’t mess up anything on the radio, don’t let me run out of area and don’t let me get shot,’” he chuckled. “Imagine being able to get the reps and sets before you go to Fallon for the first time, you’re on your game, and you’re knocking it dead. That’s bending the curve — taking advantage of putting 20 airplanes in the air and from that, how much more effective that training will be.”

He also talked about modernizing training for student aviators, and using small VR devices. The goal is to produce a higher quality, student naval aviator. “We started with a small pilot of about 20 students – one dropped out because of medical, but everyone else passed through the syllabus. The instructor said there was a higher quality student.”

The events were harder because they could move around, and the grades were lower, but grades are aren’t always the final determination for success, he noted. “The sortie count went down, they achieved milestones faster, and reduced the time to train,” Covelli explained. These results triggered change and they have already started a second class.

“If we go to this method, that syllabus will save up to $20 million a year!” said Covelli. “That’s a lot of money saved for flying and training — the CNO can do whatever he wants with it. That’s his money to be put back into the Fleet.”

Stuckey talked about other training success stories, including the use of the multipurpose reconfigurable training system (MRTS), a family of trainers providing a virtual training environment simulating a variety of systems, and the training improvements using it, comparing legacy students to MRTZ students.

“People come to NAWCTSD and tell us they want us to do something for them,” Covelli explained. “They can choose to go somewhere else.” So, in their mission to be the provider of choice, they sampled their customer, just like industry. “They came back and said we had great products, but you need to go faster and you need to be cheaper,” he said.

So NAWCTSD looked at their focus areas and redefined them into four: the customer, availability, speed, and affordability. Why is speed NAWCTSD’s number one priority?

“It’s twofold,” said Covelli. “Sometimes you have to give the customer what they want, and sometimes the 80 percent solution is good enough. When the Fleet says give it to me, we can’t say, ‘Wait and in two years, we’ll have 100 percent.’ If I put that 80 percent on that curve, it moves up and we can correct deficiencies and improve the capability two years later. That’s how you bend the curve.” He then added that going faster also saves money because of the reduction in labor hours spent developing and fielding a product.

He reiterated, give the Fleet what they want when they want it, as quickly as possible. “You can’t have it all,” Covelli said. “We have a great quality product but sometimes 80 percent is good enough. Sometimes you have to move out.”

Covelli said that one of the ways NAWCTSD is going to do this is remove the red tape. “If it’s something in my control, we’re going to try and remove that barrier,” he said. “But we also need to work on our partnerships and remain focused on our Fleet customer.”