Captain Covelli: Let’s Learn from Our Mistakes and Move Forward 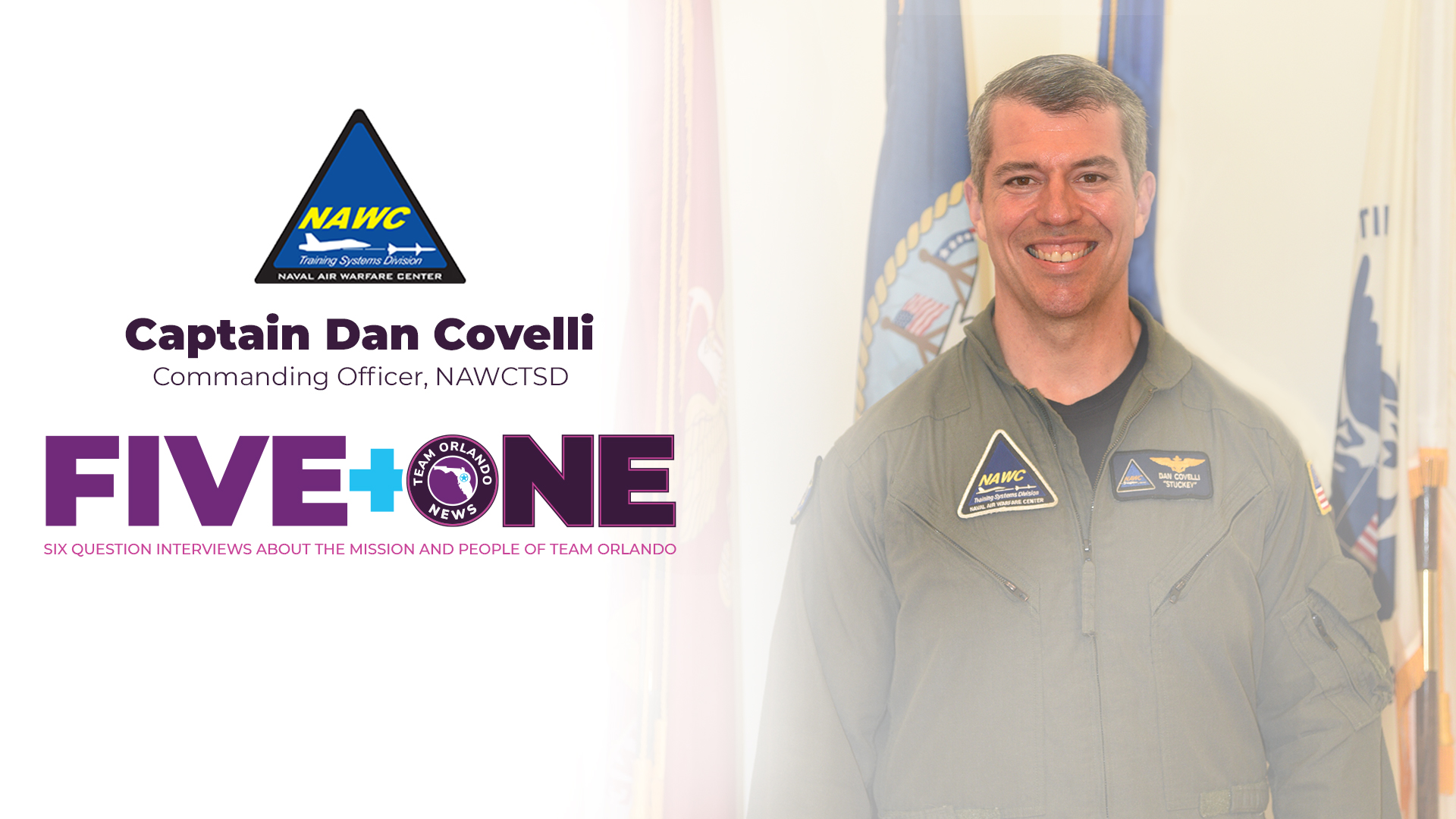 For the Naval Air Warfare Center Training Systems Division commander, Captain Dan Covelli, his philosophy is quite simple. “It’s people, family and mission,” he said. “People are our greatest asset. Without them, we’re nothing and we could not deliver the great products and services that we’re providing to the Fleet.”

Covelli believes you must take care of your people, treat them with respect, and think about the way you would expect to be treated. “We want them to be here, to be part of the mission and to be part of our team,” he said. And part of that is ensuring the team achieves a work-life balance.

“You can’t work 70 hours a week, week after week or you will burn out,” he said. “That is pure and simple — you can’t do it.” He noted how burnout is bad for everyone across the board — the team member, their family and quite possibly the mission.

“One of my old XOs told me that I could get hit by a bus and that it would be a hard week or two for the squadron, but in three weeks, they would have a replacement on board and it would be fine,” he said. “We’ll get on with it. Your family needs you and that would be unrecoverable for them. So go home to your family and be with them.”

He explained that there are definitely times when the mission is the highest priority and the order of people, family and mission shifts. “Every once in a while, the mission will take precedence.”

Covelli believes it’s important to recognize people. “That is so important. Think about how you feel when folks recognize you.” But, he said, we usually recognize people for things that resulted in something great. “In acquisition, we live in a world where we have imperfect information, and we use risk management. People have to make decisions based on that information, then make a calculated risk and move forward.”

And sometimes moving forward is after a mistake has been made. But if they don’t try or fear of failing, they will suffer from paralysis by analysis and things won’t get done. “I tell folks that I’d rather you move three times as fast and fail once along the way, but I’m talking about an epic failure,” he emphasized. “Learn something and incorporate those lessons into what you’re doing and spread it through the command.”

And it’s instances like these epic failures where Covelli feels you should recognize folks for trying to do something.

This is the basis for NAWCTSD’s This is the Way award, coined this with help from Executive Officer Captain Tim James. This award is based on the way they want people to act.

“I tell folks I’m waiting for an epic failure where someone had – I’m going to assume — noble intentions and tried to do something good for the warfighter, and it just didn’t work out. I want to give them an award for that. I’m still waiting for that to happen.”

(Watch the video to hear about a moment when the epic fail almost happened, but in the end the plan by two NAWCTSDs folks worked out.)

“I think the command likes those awards, because we’re talking about behaviors we want to emulate and they’re learning from their teammates,” he explained. “I want them to feel — and I believe they’re starting to realize this — that we have their backs. Just because you didn’t come out with that successful outcome, it’s not the end of the world.”

“It culminated with bring your kids to work day, and that was really good,” said Covelli. “It made everyone feel valued and they got to bring their family members to work to see all the great things we’re doing here for the Fleet. We had demos in all the lab and a cookout. I think the teammates really liked this and we plan on doing it again next year.”

Another program to help connect the NAWCTSD team with leadership is the new Lunch with Leadership program. Covelli says he believes that it’s important as leaders to walk around and be seen, but sometimes that’s hard because you’re a moving target and people aren’t really sure where you’re going to be and when.

“So we came up with Lunch with Leadership, and this way, you know where the leaders are going to be and when,” he said. “We have a member of the front office group, either myself, the XO, technical director or the acquisition director during the lunch time so people can come see us. We do it a different day of the week at a different time, so it doesn’t interfere with standing meetings.”

Covelli said these lunch meetings really give you the opportunity to understand the basic interests of their teammates, and that once in a while, they talk about barriers they’re facing or a resource the need. That’s an opportunity where leadership can help – what authorities do you need to do your job? What resources do you need?

“If you come to an impasse with a teammate in your organization or even someone else in another organization, don’t let it fester,” Covelli said. “Raise it up to the next level within 24 to 48 hours…vice them waiting months and then the leadership team or the front office group is faced with an ultimatum, and we really can’t help them. And it resonates with the team when they hear that.”

It’s obvious in conversation with Covelli that he is leading with compassion, and that his dedication to the Fleet is one that runs deep.

“I grew up in the Bronx,” he said. “My parents did not have a lot of money, but they valued education, setting goals and working to achieve those goals. From an early age. I wanted to serve my country. I knew I wanted to go into the military and be part of a bigger team, but as a teenager I wanted to fly jets off an aircraft carrier.”

In order to achieve those goals, he knew he had to make his education the priority. And he did achieve those goals. “I got to go and fly jets off carriers. But what’s even better is I got to work my way to be here, to be the CO of NAWCTSD and this is one of the best kept secrets in the Navy. The work we do here is incredible. We have a direct and positive impact on almost every Sailor and Marine.”

The products and services that NAWCTSD provides allows those Sailors and Marines to hone their skills so they can operate their weapons systems at the edge of the envelope in order to preserve the peace and if necessary, win in combat and return home safely.

“Returning home safely is very important — we take that very seriously,” Covelli emphasized. “And that’s how we contribute to the overall mission. We allow the Fleet to stand ready and come home safely. I’m very proud of the team for being able to do that.”