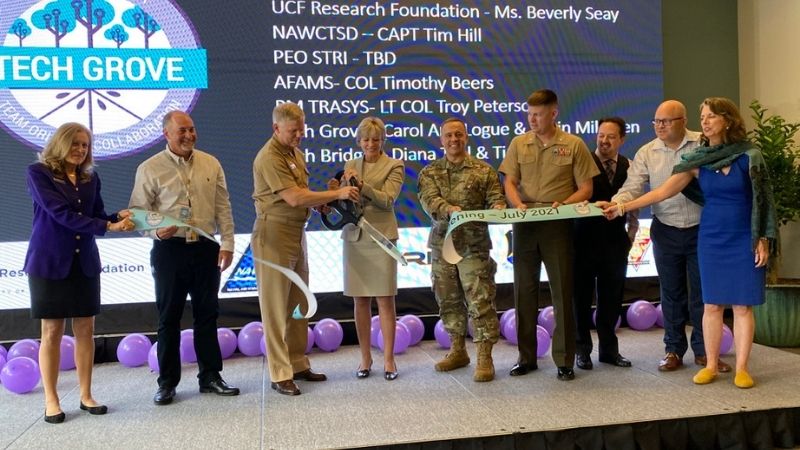 The Central Florida Tech Grove celebrated its one-year anniversary and grand opening with an event on July 8, which included demonstrations, several speakers (both live and video), networking and a ribbon cutting.

The Tech Grove opened last year during the pandemic, and up until recently has been holding mostly virtual events. And although it was originally designed to have a virtual component, the team is ready to get to work!

“Tech Grove is a very unique collaboration,” explained Logue. “It is truly a unique, multi-member partnership intermediary agreement (PIA). That agreement is between the UCF Research Foundation and the Navy, with funding support from the Army, Air Force and the Marine Corp Training Systems commands. It’s a true, authentic blending of purpose, mission, and resources to build on the very unique collaboration that is Team Orlando.”

The purpose of the partnership is to reach out to a wide range of national, and in some cases, international audiences, in particular small businesses that are non-traditional — those not in the defense industry or new to the defense industry. Logue also noted that even larger companies are not already in this space but are leading the development of innovation that is crucial to modeling, simulation and training (MS&T).

Logue also talked about the importance of reaching out to academia. “Some of the most world-class innovations are going on in our universities, certainly at UCF where we have stunning research going on, but universities all across the state of Florida as well as the U.S.,” she said.

“Our mission is to bring these innovators from every sector to the table — to engage, collaborate, innovate, and to work in partnership with our Team Orlando services to create those solutions that our warfighters need,” Logue said.

In introducing NAWCTSD Commanding Officer Tim Hill to the podium, Logue said they were determined to have the grand opening before he leaves command on July 16. “If it wasn’t for him, we probably wouldn’t be here today. He had the vision. He had the determination.”

That vision started with bringing together as many people as possible — collisions that cause innovation and movement forward, Hill explained. “We’re in a world where we have peer and near-peer adversaries,” he said. “And those adversaries demand that we innovate at a much more rapid pace than we have in a long time in order to keep up and maintain our advantage. I think all of us in this room can agree the world is a better place when we’re at least even with the biggest stick on the block.”

Hill believes that part of the way we innovate and stay ahead is to play on the strengths of the American people. “So, number one — our people. And number two — our ability to innovate. Here at Team Orlando, we have a well-established ecosystem and it’s really focused on people. Making those people, our military warriors, better at their trade craft. We focus on training systems, training content, and all kinds of technology. But at the end of the day, it’s aimed at making people better at what they do and allowing our Navy warriors to go out to sea, prevail in any conflict, and always come back safely. “

When it comes to making people better, Hill also said that innovation is a big part of that, but that the federal government is no longer leading that innovation, and now more than ever, the innovation dollars are being spent in the private sector.

“We in federal government need to latch on to that innovation and pull that in where appropriate into our space,” Hill said. “The Tech Grove space is an important part of taking the existing Team Orlando ecosystem, and making it deeper so the working level folks are coordinating and collaborating with each other. And then making it wider, pulling in folks that aren’t really used to dealing with DoD as their prime customer.”

“That does some things for DoD; challenges them to be easier customers and to use some of the authorities and tools they have in their toolkit. We can better interface with those folks and make it easier for them to do business with us and help our nation’s troops. I am a strong believer that this is a game-changing capability in our ecosystem.”

Program Executive Officer for Simulation, Training and Instrumentation, Karen Saunders, was unable to attend the event in person, but was so eager to take part in the celebration, she taped a message to share. “PEO STRI is proud to team with our sister services, the University of Central Florida, and our small business industry partners to keep up with the ever-increasing speed of innovation amidst a rapidly changing combat environment,” said Saunders. “As a long-time Team Orlando charter member, when the Tech Grove concept first emerged, we jumped on board. We’re excited to continue our collaboration to establish the Tech Grove partnership.”

Saunders said she envisions incredible opportunities to network with UCF students, faculty, traditional and non-traditional vendors, small businesses, and other local, state and federal agencies. “This partnership will springboard innovation in a variety of technology-focused areas directly applicable to modernization programs and aiding and enhancing warfighter capabilities and training,” said Saunders. “Exploration and innovation in areas such as artificial intelligence and machine learning, cyber, medical simulation, full stack game engine and dynamic terrain development and deployment, human performance, multi-sensory and sensor fusion technology, and on-demand internet of things integration at the point of need will be essential to meet the training needs of our 21st-century warfighters.”

Saunders noted that Tech Grove events enable the team to build relationships and improve communication between industry, academia and government, facilitating cost-sharing between the Team Orlando agencies to find common solutions to joint problem sets, and demonstrating positive stewardship of public funds. “And simply, we improve the quality and timelines to deliver start-of-the-art capabilities to our warfighters,” she said.

“The next step for PEO STRI is to leverage this awesome new Tech Grove innovation hub, work together with our Team Orlando partners and companies, as well as proactively reach out to the cool garage engineers and scientists to help us incubate out-of-the-box solutions for some of our toughest problems.”

Saunders said that PEO STRI is excited and “all-in” for the Tech Grove campaigns and they look forward to actively participating in events across all areas of the enterprise. “Foot stomp the message on behalf of our sister services and the defense community at large: It is vital for our nation’s military to transform today to meet tomorrow’s challenges,” she emphasized.

Immediate Past Chair of the UCF Board of Trustees, Bev Seay, has seen the growth of the MS&T industry since her move to Central Florida in 1990. “When I moved here, there were hardly any buildings in this research park,” she said. “It’s amazing what we all have accomplished together. I especially have to compliment the industry. Yes, we do compete, but when we need to get something done, we always come together to make it happen and that’s what’s so special.”

Seay said UCF is special because they have modeling and simulation, and as the world has changed, it’s now time for simulation to be part of everything. “We can’t deal with these complex systems that we have to build if we’re not simulating them first; if we’re not using them to test and then have something to train with,” she explained. “So even in the simulation, the additional distinction [at UCF] is that human performance factor. These are the types of things — every single one of those key areas that most universities and regions brag that they have that capability — they don’t have the simulation and the human performance to add to it. That’s what makes us special.”

UCF is creating the region’s workforce, doing basic research and also applied readership. “They’re creative and innovative, and they know nothing about the military,” Seay explained. “This is the opportunity to make them aware that there are careers here for them and really interesting and challenging problems for them to solve. Tech Grove is the perfect place to bring these students in. They might solve a problem and decide they want to create a company out of it, and this is perfect place for all of that to come together for these collision events.”

National Center for Simulation CEO and president, George Cheros, provided a bit of history for the attendees, explaining how the creation of the Metro Orlando Task Force in 2013 came together with the mission to “preserve, protect and grow Team Orlando.” The first priority was to find a solution to get all of the military out of leased space. With a plan in place, they lobbied the state for $42 million to buy two additional buildings in partnership with UCF.

“After securing Partnership Buildings 4 and 5, what ended up happening — with the establishment of the Synthetic Training Environment (STE) command, this facility [Tech Grove], and the cybersecurity facility in Partnership 5 — it really brought in a lot more industry, which is a good thing,” Cheros said.

Referencing his speech at the ribbon cutting for the STE building in 2019, Cheros said, “I challenged government, academia, and industry to work together to make this a collaborative space so we can really focus on state-of-the-art development going forward. I’m really thrilled to see what’s happened here.”

Murphy, who is from the Central Florida area, has been a staunch supporter of the MS&T industry since her election to office. “The Tech Grove is both a virtual and physical space where smart people with dot-gov, dot-edu and dot-com email addresses work together to develop and field MS&T solutions with one overriding goal: to keep our nation safe and free,” she said.

“I do everything in my power to support the MS&T community in Orlando and around the country. I’m your congresswoman, but I’m also your champion and your cheerleader. I am so proud to represent Team Orlando, this extraordinary team composed of military services, the University of Central Florida, and other academia institutions, and some of the most innovative, mission-oriented companies in the country. The Tech Grove is yet another example of the extraordinary work that Team Orlando is doing to support our national defense and our men and women in uniform.

Robb also congratulated the Tech Grove via video, as he couldn’t be there in person, but had visited the facility one week prior. He provided some history of how Operation Blended Warrior (OBW) began at I/ITSEC in 2014. Companies had approached him with a lot of questions about how they could better integrate into government systems, and how that process timeline could be shortened. OBW enjoyed a four-year stint where an integration development lab was built on the I/ITSEC show floor.

“OBW was supported by a virtual consortium of 50 companies that put together a plan, supported by NAWCTSD, specifically Kent Gritton, to bring all those companies and government folks together to try and solve problems, and it worked really well,” Robb said.

But in the fifth year, NAWCTSD was making a change and would not be able to support OBW because they were transitioning all of those resources to try and make a persistent lab in UCF Partnership Building 4.

“That was a bad thing for me, but it was really the fulfillment of a dream,” he said. “We were going to actually bring that blended warrior system mindset into a permanent facility. In the years after that, we saw tremendous growth with the STE program and all of the breakdowns of all the fundamental issues that needed to be attacked.”