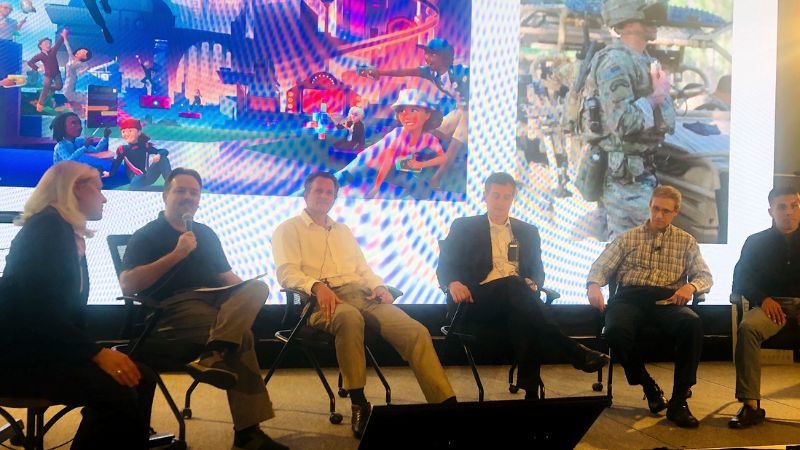 Military, industry and academia representatives participated in a “Mixology” panel hosted by the Central Florida Tech Grove on Aug. 30, 2022, wherein they addressed the question of: “What is the Metaverse?”

For most people, the “Metaverse” is considered the next step in the evolution of the Internet, and in common use, the term often refers to a collection of virtual, 3D worlds focused on social interaction. However, a more specific definition of what the Metaverse is, the implications of what it could become, and how it may affect several aspects of daily life (such as relationships, business and commerce, as well as education and training) are currently up for debate.

Certain experts argue that the Metaverse is more of a future aspiration, others write it off as “big-tech hype,” and still others say that based on recent sales of Oculus headsets, it’s already here – and evolving in real time.

“The pieces and parts have always been there to come up with the concept, coining the term,” Lanman said. “I think the term itself was probably marketing hype, but the concept is there, and we are continuing to expand and evolve what that means across our different domains. Whether you’re in entertainment, defense or e-commerce, there’s numerous aspects to what that world is.”

“They can barely afford ramen, and they might live in a space a little bigger than a storage unit,” Metcalf said. “However, their online persona may be top of their [social] heap, or number one in their sniper class, or they might be the top wizard in their group, and they’re happy because they have this digital side to their personality. Yes, there’s a possible negative, but there’s also a positive… it’s about a sense of community, and that community extends almost seamlessly between the real world and the virtual world.”

Hutt further discussed the role of those Metaverse building blocks in how younger generations have a different relationship with technology because of their familiarity from having grown up immersed in it. In the future, the “seamless” aspect of Metaverse capabilities and simulated environments like the Army’s Synthetic Training Environment will be something younger generations take for granted. According to Hutt, tomorrow’s warfighters will expect a seamless convergence of technology.

“Eighteen-year-olds who are going into the military today… have a world view [influenced from their generation’s technology] that’s totally different from the world we grew up in,” Hutt said. “While you got a headache [adjusting to] Teams during COVID, they were saying, ‘You know you should be on Discord, right?’ The point is that the technology is here, and the convergence is happening.”

Griffin took the position that the Metaverse, as a singular entity, wasn’t yet real, but a collection of small “verses” in their own stovepipes built on specific blockchains, which don’t always work with other blockchains.

“From a military perspective, if we want that kind of interoperability, not only within our agencies but within our different departments and coalition partners, we have to get on board with also tackling those same issues,” Griffin said. “We also have to bridge other types of ‘verses’ that become prevalent within our society as it moves toward embracing this next ‘Web3’ instantiation that will be this persistent Metaverse everyone is talking about. We have to admit to ourselves, we definitely aren’t there yet.”

Lerma noted that the Metaverse could look different in various industries and considered how each industry would define the Metaverse.

“Everyone will have different requirements for what that means, and time is going to determine what that means for each [specific] industry,” Lerma said.  “We have to let it play out as industry keeps pushing the envelope, and government, with its needs and requirements, will continue to push the envelope even more, and industry will react by adapting and providing what’s needed.”

After initial definitions were described, panel members went on to discuss other aspects affecting the future of the Metaverse and its implications for the modeling, simulation and training (MS&T) community. Torres cited the human factor while discussing what is missing from establishing a common understanding of the Metaverse in the workplace.

Lerma addressed what he felt was currently missing in capturing cutting-edge Metaverse technology to improve military training, which was a lack of individual data to track how students improve in training pipelines.

“We don’t have a requirement to store data on training systems,” Lerma said. “That training system data has to move along with the individuals… to understand how they are getting better, and the problem is you face a lot of regulation when it comes to data from HIPPA laws to personal identifiable information that make it very challenging. Sometimes you can’t overcome those challenges, so you have to make models and assumptions… to make [the training] better.”

Torres went on to emphasize challenges in reproducing high-fidelity interaction and consistent training in the Metaverse due to the nature of certain types of military training, using the Space Force as an example.

Dr. Chris Libutti, Tech Grove manager, said that many members of the MS&T community have a passion for discussing topics like the Metaverse. While most outside that community would probably just see a bunch of people talking a fake reality, Libutti maintains that the benefits of conversations like the Metaverse panel may take some time to develop, but they ultimately improve the field and advance innovation.

“When those people leave the room, that’s when the greatness happens,” Libutti said. “They think about what just occurred, the wheels start turning, they call friends and colleagues in the MS&T space, and they share more refined ideas and questions.”