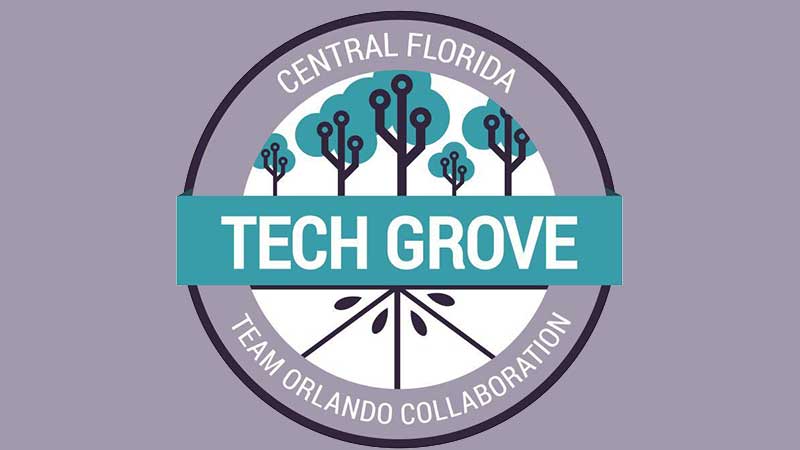 The Central Florida Tech Grove became official on September 17, 2020 when the first Collaborative Project Order (CPO#1) was issued toward the Partnership Intermediary Agreement (valued at $369,738) between the Naval Air Warfare Center Training Systems Division and the University of Central Florida Research Foundation (UCFRF). The Tech Grove will open new avenues for collaboration between a wide range of businesses, entrepreneurs, innovators, academia and Team Orlando’s military modeling and simulation commands. 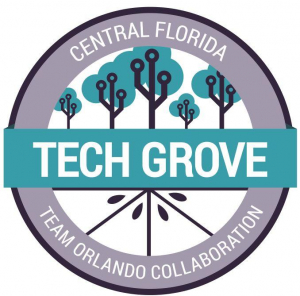 The Central Florida Tech Grove logo honors the citrus heritage of Orange County, Florida, where the Naval Air Warfare Center Training Systems Division (NAWCTSD) is located, while highlighting the high tech activities that are now commonplace in the area. The logo uses purple, representing the co-located nature of military and government modeling and simulation activities that take place in Team Orlando, while the teal ties to the Team Orlando logo. The overall design is inspired by the design of the Central Florida Tech Bridge, which also calls NAWCTSD home.

“We are excited see Tech Grove launch. Both the physical and virtual portions of this venue will do great things to deepen the existing connections within Team Orlando and expand our ecosystem in ways we can’t even fully envision,” said NAWCTSD Commanding Officer Capt. Tim Hill. “I fully expect that the products that will come into being as a result of this investment in collaboration will keep our nation’s warfighters ready for years to come, and I’m betting that Tech Grove will help solve some hard problems outside the training domain as well.”

“The University of Central Florida was established to serve the needs of our nation’s defense and space industries. We have always been deeply entwined with our military services supporting the needs of our warfighters with cutting-edge research and outstanding talent,” said Interim Central Florida Tech Grove Manager, Carol Ann Logue. “Executing the Partnership Intermediary Agreement is a natural next step in that relationship. Through the Central Florida Tech Grove, we will be able to tap our extensive connections across the region, state and nation in the entrepreneurial ecosystem to find untapped innovators with new solutions.”