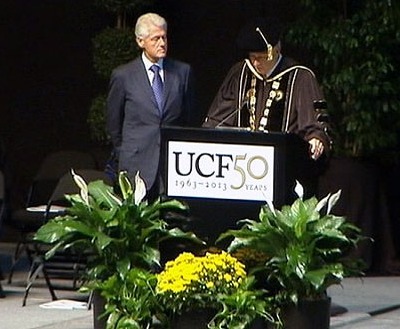 Former President Bill Clinton recently visited Orlando and delivered the Spring Commencement speech to thousands of graduates from the College of Health and Public Affairs, and the College of Medicine at the University of Central Florida.

“UCF was pleased that President Clinton helped us celebrate our 50th anniversary year by speaking at commencement,” Grant Heston, Associate Vice President, Communications & Public Affairs, UCF stated. “His affection for UCF was clear, and it is a memory our students will have for a lifetime. His was another voice lauding UCF’s mission to be America’s leading partnership university.”

On many occasions, Clinton has visited Orlando and referred to the successful collaboration in Research Park as a national example of people working together in spite of political preferences, personal agendas and diversities.

Clinton’s brief and highly relevant speech provided a glimpse of humor, personal experience and advice for the enthusiastic graduates. He opened with bona fides to UCF, stating “I am really honored to be here. Some of you know that I am UCF’s most ardent, unpaid flack. I love this place! It’s big, diverse, energetic, and focused on the future.”

Clinton congratulated UCF on its 50th anniversary and thanked UCF President Hitt, emphatically stating that he has done a fine job. “President Hitt and I were elected the same year,” stated Clinton. “I have been out of office forever, but he is still here.”

Touching on Orlando as the land of opportunity, Clinton said the Orlando area currently has a strong economical climate, one that has grown into a place where people are not only born and raised, but educated and trained as well. “The future belongs to places that have the three T’s: talent, technology and tolerance,” said Clinton, quoting from “The Rise of the Creative Class,” by Richard Florida.

“I often cite from ‘The Next American Economy’, a book which features Orlando and talks about the work that is being done here between the public and private sectors and computer simulation,” Clinton said. He pointed out that the most successful economic places exist where there is a very high level of cooperation and creativity — where people work together across political lines and diversity. “This mindset will generate more jobs and more opportunities and stay in the future business,” Clinton said.

He asked the graduates to think about what determines a successful future and challenged them to think about the future with a high level of creativity and cooperation. “The most important thing is whether or not we decide to share the future or try to own it from whatever groups we are a part of,” Clinton said. He suggested they live in a world beyond their job and reach out to the unexpected.

“The successes of UCF and the successes of Orlando have been chronicled by observant outside sources,” he stated. “They are all testimony to the fact that no matter how right we all are, we do better when we work together.”

Clinton encouraged the graduates to be great change agents and that the most important thing about their degree is the choice it gives them when determining what to do for a living.

“My advice is do what makes you happy,” he stated. “Most people are happiest doing what they are best at. I hope you will do well, and I hope you will have a good time doing it.”