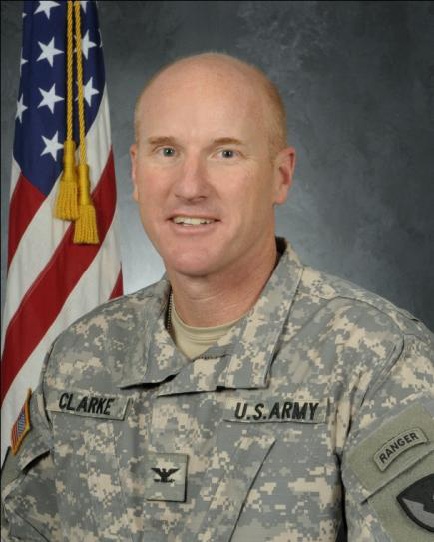 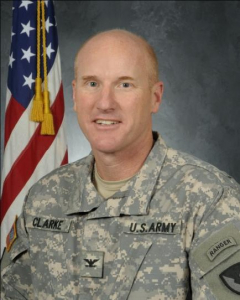 Colonel Matthew T. Clarke is the new Commander for the US Army Simulation and Training Technology Center (STTC) and one of newest Team Orlando members, taking command at STTC in June. He spent the last four years in Europe serving at the Missile Defense Agency (MDA) as the Assistant to the Director, but now back in Florida, he and his family are excited about rediscovering the United States and all that it offers.

Clarke graduated from the University of Pennsylvania with a Bachelor of Science in Biomedical Engineering and received a commission through the Reserve Officer Training Corps (ROTC) into the United States Army Corps of Engineers. With his father a graduate from West Point and a Vietnam veteran, and members of his family serving in the military going back for generations, even some direct relatives who fought in WWI, WWII and the Civil Wars, Clarke says he really had no plans to join the military. But the military offered him an ROTC scholarship, and he accepted.

Through his ROTC commission, Clarke’s original commitment to the Army was for five years, but beginning at that mark, and then several times throughout his career when he had to make the decision to continue his military career, or “get out,” the circumstances supported his decision to stay. “I enjoy the people, the challenges and the ability to do things that make a difference,” Clarke said of his unplanned 27-year military career. “I guess I’ve come to terms with the fact that I made a career out of it,” he smiled.

STTC conducts simulation and training research and development to enhance Warfighter effectiveness. They research, develop, mature and transition innovative technology that benefits Soldiers. “We leverage the commercial markets and academia in addition to our in-house work,” said Clarke.

“My responsibility is to lead and champion the organization and its people and to set strategic direction aligned with the Army and the Soldier in mind. We also want to establish a working environment that promotes both creativity and productivity. STTC has a great work force; sometimes my role is just to get out of their way!” said Clarke.

Clarke’s initial assignment was in Germany as a platoon leader and executive officer in the 12th Engineer Battalion, 8th Infantry Division. “As a combat engineer, we would build small things and blow up a lot of things,” said Clarke about his first assignment. “It was a lot of fun in an infantry division.”

Upon completion of the Engineers Officer Advance Course, he served as an assistant operations officer and adjutant in the 43rd Engineer Battalion, 36th Engineer Group. He commanded Charlie Company in the 43rd Engineer Battalion from January 1990 to August 1992, commanding both in the Gulf War and Central America. Here he served as a combat heavy engineer, those who are responsible for vertical and horizontal construction, including buildings, roads and everything in between. Their work benefited our Soldiers, as well as other nations. “This type of work was very rewarding,” said Clarke. “You see the benefit of your work and the results have a positive effect on people.”

In his new STTC position, Clarke, along with his team, is still doing important work that benefits our Soldiers, but now his focus is on his team’s success, keeping things running smoothly so the people at STTC can do what they do best. “I’ve got a lot of smart people that work here that don’t need a lot of day-to-day oversight,” he said.

“I’m focused on making sure that what we’re doing here ties into what the Army requires, and that the work we’re doing here, the research and the technology we create, is integrated and linked to the greater good,” said Clarke. “We want to build things that integrate into other programs and can possibly combine into a real significant piece of technology or research.”

Three months on the job, and back in Florida, Clarke says his wife and two boys, 12 and 13 years old, have all transitioned very well. He is also enjoying the Florida weather and the activities he likes: biking, swimming, running and fishing. “I’ve been fishing with the kids, but we haven’t caught anything,” said Clarke. “We wouldn’t know what to do if we did,” he joked. “Right now, free time is all about family.”

He admitted that being a new homeowner was exciting — for a very short moment. “When it’s new, it’s exciting,” he said. “That part wore off after about three weeks, and I’ve learned with homeownership in Florida, sometimes water is not your friend. But Florida is pretty nice, and a good, steady community to raise a family.”

Even though his time at STTC is really just beginning, Clarke has already pinpointed some challenges for STTC and realizes that a long list is just the nature of the business. “We are constantly exploring, researching, and attempting to create new training technologies that satisfy today’s requirements and maintain their value into the future,” he said.

He noted that probably his two greatest challenges are to create or recognize opportunity and to increase STTC’s organizational agility. “With respect to opportunity, I mean understanding, and shaping the environment to converge requirements and resources at the right time and place, bringing the parts together,” explained Clarke. “The agility part is insuring or maintaining our ability to act decisively and do something with the pieces. The R&D world changes quickly and we need to be just as fast.”

“Some of the ways we improve Soldier training is by creating more realistic hands-on training devices; finding ways to increase the richness of virtual training; creating digital tools to help trainers develop their own virtual training scenarios; and researching how people learn in a digital environment,” said Clarke.

With so many areas in which they focus, STTC is looking at some exciting developments with regard to applications for mobile devices, tactical and medical holograms, adaptive tutoring, human robot interaction and the Virtual World – Enhanced Dynamic Geo-Social Environment (EDGE).

Clarke hit the ground running, preparing and delivering his first Team Orlando briefing only four days after his arrival. “The Team Orlando environment is really great,” he said. “Everyone is professional and willing to help, and you never see anything but a good attitude around here.”

“I think I’ve found the keys to success for me are to lead well, work hard and treat people with respect,” said Clarke. “These are pretty basic, but if you do the right thing, and try to do a good job the first time, that will take you down the right road.”