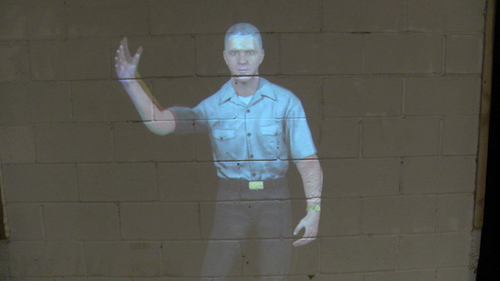 In conventional forces, 24 percent of wounded warfighters die of potentially survivable wounds, but the 75th Ranger Regiment loses just 3 percent of its warfighters. The highly collaborative Squad Overmatch seeks to close the gap.

The Squad Overmatch (SOvM) study is a comprehensive approach to learning that explores the wide range of skills needed in today’s urban-battle environments. A collaboration of the Army, Navy, Marine Corps, industry, academia and other government agencies, SOvM leverages findings from military studies of battlefield performance, stress response, leadership, communications, and tactical combat casualty care. That foundation was built into sophisticated training technologies and curriculum. 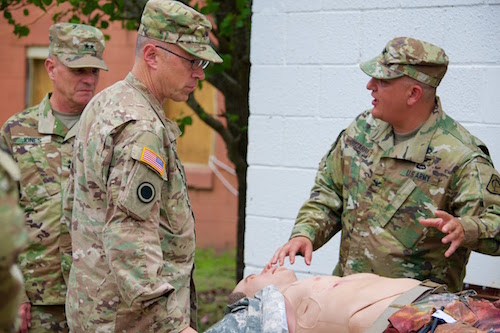 The goal of the SOvM study team is to improve training effectiveness and realism by supplementing existing programs of instruction and programs of record.

Unique to SOvM is the Integrated Training Approach (ITA) that integrates five lifesaving domains into a single compressed curriculum. Previous research has shown that each of these domains contributes to improving individual and team performance: 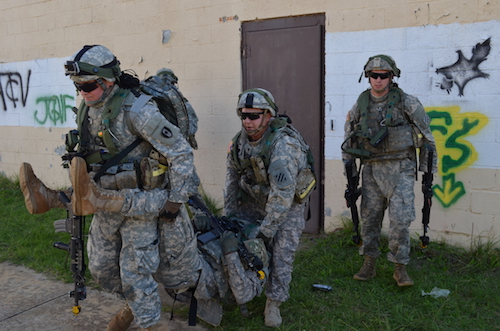 SOvM ITA combines multiple training formats to ensure skills are first understood intellectually and then applied effectively under conditions that replicate combat. Training begins in the classroom, progresses to simulations, and then culminates in live training events. It encompasses a mission from beginning to end: mission planning to casualty collection sites and evacuation preparation.

Trainees had to determine when, how and who to engage, and were ultimately challenged with treating a wounded buddy. A fully modeled improved first aid kit provided the tools needed to save a life.

Following Army Games for Training scenarios, realism was enhanced with live training at the MOUT site. This featured immersive situations with automated and human-controlled avatars exhibiting verbal and nonverbal cues that pointed to potential behavioral and situational hazards, an array of non-pyro explosive effects, trauma mannequins at sniper-fire and IED locations, and moulage to add further realism in the MOUT training environment.

One trainee said, “This is leaps and bounds beyond paper targets.”

Warfighters referenced electronic cards that displayed real-time looping videos of wounds with their vital responses. These indicators changed based on care given. After a tourniquet was applied, vitals improved but plummeted rapidly with improper or untimely care.

A squad leader reported greater confidence in his team at the conclusion of the training study. “I felt more confidence in them than I ever felt with any squad member, because they were all on the same page. Everyone knew their job. I watched it. I saw it pay off in the practice rounds. The computer portion was key. It didn’t waste any resources.”

Although he had worked with several of the squad members previously, the squad leader said, “If I had three days and all random squad members, I think I would have had the same outcome. This is one of the most helpful training (programs) I’ve ever done.” 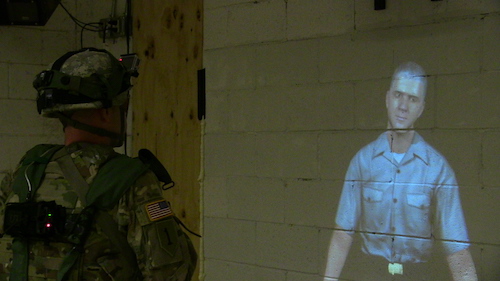 A study conducted by the U.S. Army Institute of Surgical Research, led by Col. Brian J. Eastridge, MD, analyzed Operation Iraqi Freedom and Operation Enduring Freedom (OIF/OEF) combat casualties that died from battlefield injuries from a ten-year period of 2001 – 2011. The study concluded that 87 percent of injured warfighters who died of their wounds, did so before reaching a medical facility. Most bled to death, even though 24 percent had suffered wounds that were potentially survivable if first aid had been administered quickly.

In contrast, only 3 percent of 75th Ranger Regiment deaths were deemed potentially survivable wounds versus 24 percent for conventional forces.

The 75th Ranger Regiment demonstrated that deaths on the battlefield can be significantly lowered when warfighters are trained as first responders. By identifying, prioritizing and treating life-threatening wounds, soldiers focused on “What’s Important Now,” and that is saving lives.

Rob Wolf said: “This underscores the importance of first responder self and buddy aid/TC3 training in realistic environments. It’s an objective of SOvM to close the gap between those staggering statistics.”

A soldier with multiple deployments to Afghanistan said, “I wish I could have had this training before I deployed.”

SOvM is a highly collaborative project, bringing together military, academic and industry partners for the benefit of all the forces. The program has been funded by The Defense Health Affairs Joint Program Committee for Medical Simulation and Training and the CSA Army Study Program Office.

PEO STRI manages SOvM in collaboration with the training developer (MCoE), the combat developer (CAC-T) and is supported by Army, Navy, USMC, industry, academia, and other government agencies.

It incorporates 21 Programs of Instruction, Programs of Record, and new technology insertion providers and products. SOvM includes a team of distinguished SMEs across each domain supporting curriculum development, instruction, and integrated AARs.

Waymon Armstrong, CEO of Engineering and Computer Simulation – contractor for TC3, said: “ECS has been serving the military for nearly 20 years with simulation training tools, and I have never worked with such a diverse group of professionals committed to collaboration.

“TC3 trains warfighters to win and survive in ambiguity and chaos and contributes to the goals of Squad Overmatch: increasing situational awareness, building psychological resilience, developing teamwork and integrating human-performance behaviors in AARs. This type of collaborative approach to solving warfighter challenges takes strong collaboration, and Squad Overmatch achieves that hands down.”

A joint team of researchers from NAWCTSD, PEO STRI, USMC PM TRASYS, ARL ATSD and the Army’s Maneuver Center of Excellence (MCoE) conducted curriculum development, data collection and experimentation over a two-year period in 2015 and 2016 at Fort Benning, Georgia. To date, sixteen squads have supported SOvM from the Army’s 3rd ID, 316th CAV, 82nd ABN, 75th Ranger Regiment, and the 6th Marines Division. During the June 2016 experiment an extensive array of more than 1,000 data points were collected from each soldier in the control and experiment groups. Data will be analyzed through 2016, with additional site trainings occurring throughout 2017 to refine and validate the findings. A final report is expected in Dec. 2017.

The SOvM team will be publishing preliminary experiment findings and a draft Training Support Package (TSP) in 2016. The TSP will assist commanders in conducting mission-critical training in the classroom; gaming and virtual environments, and live exercises with key AAR learning objectives.

In 2018, the SOvM team will be seeking additional units to implement the SOvM ITA. The SOvM study team is developing a train-the-trainer package to facilitate transitioning to the field. The first implementation of SOvM will be at Camp Buehring, Kuwait, this fall.