DHA’s PM MST: Save Lives and Improve Healthcare Through Simulation 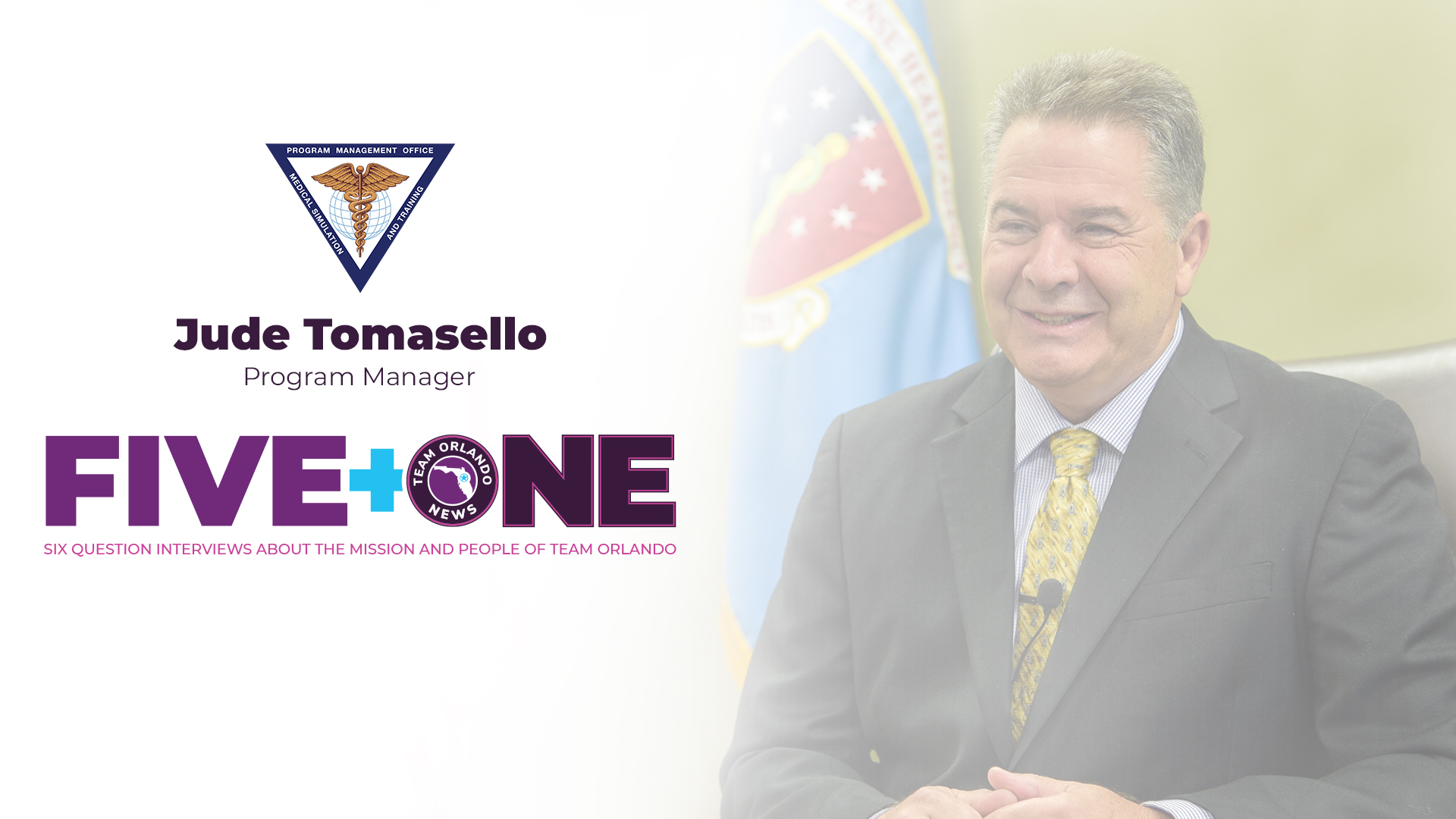 Watch the interview with Jude Tomasello.

“PM MST’s mission at DHA is purposely simple – it’s to save lives and improve healthcare through simulation and we do that using the Defense Acquisition System,” Tomasello said. “We take a requirement as identified by our users, or our stakeholders, and see that all the way through the process to deliver a capability. We’re there every step of the way working with our requiring activity, working with the contracting folks, and eventually deliver and sustain a product.”

“But at the end of the day,” Tomasello reiterated, “[the mission is] always save lives and improve healthcare through simulation.”

Tomasello began his career in the modeling, simulation and training industry in 1987 as an electronics and project engineer with the Naval Systems Training Center in what is now Baldwin Park.

“I was very fortunate to have some mentors that helped me and showed me the ropes and the ways of doing business in DoD, especially on the civilian side,” Tomasello said.

Tomasello’s experience grew and expanded to include more diverse technologies, and he transitioned to the Army’s Program Executive Office Simulation, Training and Instrumentation (PEO STRI) in 1995. Starting as a project engineer, Tomasello grew into a systems engineer, moved into program management, eventually becoming a deputy project manager and later project manager throughout his 23 years. A lot of engineers want to become program managers, according to Tomasello, which is a logical evolution because it allows them to see the entire scope of a project from start to finish and influence a project more.

“I also learned how to deal with people,” Tomasello said. “Being a supervisor in the DoD, you’re part mother, father, coach, teacher, policeman, psychiatrist, friend and all those things in between as a leader. You can’t read it in a book… you have to live it to really be skilled in [performing those roles] in the manner in which they need to be done.”

Since moving from PEO STRI to his role as program manager at DHA roughly two years ago, he has noticed obvious differences between the two organizations’ methods of operations, largely due to the differences in age. Tomasello said that DHA is young in agency terms (about 14 years old), so it doesn’t have certain practices established as firmly as PEO STRI, which has been around for much longer. This can present challenges that lead to opportunities for special emotional satisfaction in being free to structure one’s workplace.

“I’m on a couple of teams, and so are a couple of my folks, who are helping build those foundations in DHA,” Tomasello said. “When we transitioned from the Army to DHA, that was my commitment that we’d bring that [experience] from the Army side… [which is] very exciting on the DHA side that we’re now creating and writing those policies. It has our influence and our fingerprints, and if you’ve ever built something from the ground up and it’s got your signature all over it, that’s also very exciting.”

As program manager, Tomasello considers his top leadership priorities to be his people and the organization’s stakeholders. According to Tomasello, his team honed their skills on the Army side, and DHA now benefits from those years of experience. As a leader, he feels responsible for creating an environment in which his team members can flourish and will provide the training and coaching that helps them do their jobs without any obstacles.

“My other priority is the people we serve – our stakeholders – the docs, the nurses, clinicians and the combat medics out there who need what we’re providing to be ready, trained and able to do their jobs, which all goes back to using simulation to save lives,” Tomasello said. “There’s no greater feeling than when a Soldier comes up to you and says, ‘That device saved my life or saved my buddy’s life,’ and I’ve had that happen to me more than once. That’s why we’re here, and it puts you on top of the world when you hear that.”

Tomasello said that DHA, like any other agency, is facing challenges that require looking at everything they do, and they have to provide value proposition to what they’re doing. In his line of work, the question that is eventually asked is: “How do you put a value on a human life?” According to Tomasello, you don’t.

“You put a value on the way we deliver those capabilities and enablers that our stakeholders need to [save lives], which is in the processes we use,” Tomasello said. “Are we getting more for less? Are we efficient in the way we do things? Are our resources right-sized? [These questions matter in being able to] use the procurement process to get the taxpayer, the stakeholder, and the users the best bang for the buck.”

PM MST has various simulation programs that Tomasello is looking forward to developing further in the future that will employ economies of scale and efficiencies, which will give stakeholders what they need at a better cost to the government and taxpayers.

“We’re training Special Forces combat medics with a device that’s being used as we speak,” Tomasello said. “It’s teaching them prolonged casualty care as well as other special tactics and techniques that Special Forces use in treating battlefield injuries.”

While certain PM MST programs have an overt, military-centric focus to save lives directly in harm’s way, other programs have applications outside combat zones.