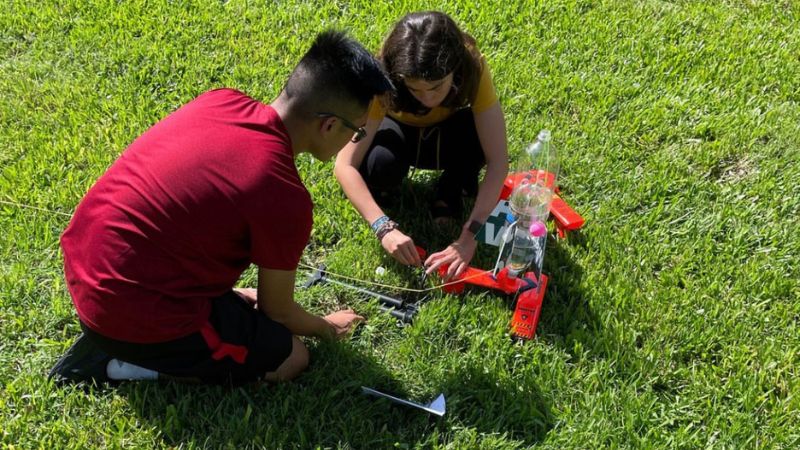 The Department of Defense (DoD) STARBASE program first began in Detroit, Michigan, in 1991. Now a nationwide program sponsored by the Office of the Assistant Secretary of Defense for Manpower and Reserve Affairs, it provides students with challenging “hands-on, minds-on” activities in science, technology, engineering and math (STEM).

“The program was created as a way to introduce and engage fifth graders and their teachers,” said Lindsey Spalding, director of STEM programs at the National Center for Simulation (NCS), and the STARBASE. “The founding members of the STARBASE concept decided that fifth grade was the target group, and if we could engage them [in that grade], then maybe we could encourage them to continue in a STEM field. The DoD came up with STARBASE and it’s been working since the ‘90s, sponsored by military groups across the nation.”

DoD STARBASE Central Florida (SBCFL) was established Sept. 10, 2021, in Orlando to continue the program’s mission to expose school children to technological environments with positive civilian and military role models on military bases and installations. The goal is to nurture a winning network of collaborators and build mutual loyalty within communities by providing students with 25 hours of hands-on STEM instruction and activities that meet or exceed national standards, approved by Department of Defense Instruction.

“Each of our programs get to approach [STEM instruction] from our own workforce perspective,” Spalding said. “For Central Florida, that means modeling, simulation, and training (MS&T), so it involves a lot of human performance and how to engineer, design and maintain various simulators. We consider our lab a serious play lab – serious play that saves time, money, and lives. We invite teachers and students to come for some serious play, where we introduce them to everything from submarines to satellites and everything in between.”

SBCFL recently graduated its first class, consisting of 61 total fifth graders in three groups from Orlando Gifted Academy on April 12, 2022. The graduation ceremony took place at the Central Florida Tech Grove building. The program is taught five hours per day and is flexible in its administration. SBCFL instructors can complete the 25-hour curriculum, either through a straight week of classes, or one day per week over five weeks.

Spalding considers SBCFL’s focus on MS&T and human performance to be its “unique flair” that sets it apart from other STARBASE programs. SBCFL’s advantageous location in the Partnership buildings gives students access to research labs. Military volunteers lead tours and give lectures to apply abstract principles in real-world situations to leverage STEM in various settings and careers. Nationwide, the program offers a variety of experiences due to academies’ locations at different installations, run by different military branches.

“Naval Air Warfare Center Training Systems Division is our lead sponsor, and the nonprofit that actually runs the program is NCS,” Spalding said. “When it comes to people actually coming to the lab and interacting with students, we’re Team Orlando, so we have the support of several military groups.”

Spalding said SBCFL also conducts summer programs and can provide an early professional certification for students coming out of high school or technical school programs, making it “a true Team Orlando effort.” She reports that SBCFL has also made connections with the STARBASE program in Satellite Beach and hopes to get the Space Force involved in the near future.

SBCFL also collaborates with several other industry and academic organizations in the MS&T space beyond the military in providing and supporting educational opportunities to students.

“Exolith creates a simulant soil we work with that’s used for testing plant growth, as well as vehicles that may one day drive on Mars, the moon or asteroids, and we often take the kids to University of Central Florida’s labs,” Spalding said. “We’re fortunate to have the support from other organizations in a large network we call ‘Friends of STARBASE’ in the MS&T community. Local psychologists have shown the kids “sounds” of their brains, we’ve worked with Lockheed Martin, Hilton Garden always brings the kids cookies, Aptima gives donations for t-shirts, and Tech Grove has supported our graduations.”

The STARBURST STEM “pop-up” initiative was recently established as SBCFL’s outreach program, with its first appearance on Sept. 10 in Eatonville, Florida. According to Spalding, schools usually bring students to SBCFL, but schools in lower-income communities with less access to the hi-tech world don’t always have the resources to do so. Families don’t always know that SBCFL exists, or the career opportunities the program can provide.

“We decided to go pop up in their communities,” Spalding said. “We take our iPads and our lesson plans for that day and the kids can spend a few hours with us. It’s a way to show them we’re not a one-time thing, and that we’re consistently engaging and supporting them to continue their STEM education.”

Plans for regular SBCFL podcasts are also currently in the works, tentatively scheduled to start posting in late September to help demystify STEM education. The idea came from Ishika Nag, an intern and current Oviedo High School student. As a fifth grader, Nag previously attended the NCS’ “GEMS” program, a summer STEM program that seeks to get students interested in four industries: military modeling and simulation, space, medical, or entertainment.

“Nag is working with a small team of students who have been in our learning network, and they’re editing sound and video for [the podcast],” Spalding said. “It’s a learning curve for all of us, and she’s spending a lot of time researching and writing scripts to narrow down the best questions for our subject matter experts to help everyone from early learners to adults to understand that STEM doesn’t have to be a mystery.”