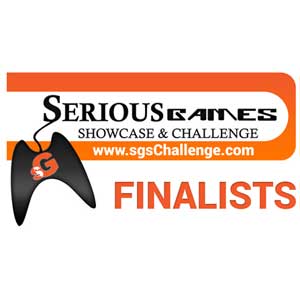 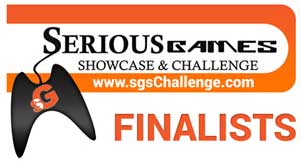 Serious Games Showcase & Challenge, the premiere venue for recognition of excellence in the field of Serious Games development, announced its 2014 finalists, narrowing down the field of submissions to only 19 games. An esteemed panel of evaluators will now review the finalists and determine the winners in the Business, Government and Student categories. Some of the finalists are also competing for the Best Mobile Game, Students’ Choice and Special Emphasis Award categories.

“We just finished this year’s Serious Games Showcase & Challenge downselect week, and it’s one of my favorite weeks of the year,” said Stu Armstrong, IPT Industry Lead for the SGS&C committee. “During down select, the members of the SGSC IPT and members of Orange County public schools review all the game submission and decide what games become the 2014 finalists.”

In the Government Category, the finalists are: Czechoslovakia 38-89 by the Ministry of Culture of the Czech Republic; Eagle Eye by the U.S. Army PdM-Ground Maneuver; and Strike Group Defender by the Office of Naval Research and MIT Lincoln Laboratory.

“This year, the quality of the games was incredible, so it was a tough week as we played through every game submitted, and had great discussion and debate until our finalists were chosen,” Armstrong said.

“Now the games are sent out to our international judges in order to determine the winners in each one of the categories, and these judges do a fantastic job!” said Armstrong. “All for the passion of serious games!”

Along with the international judges, middle and high schools students from Orange County and other parts of the country, will decide which game will win the Students’ Choice Award. Twelve of the nineteen finalists qualify and will be evaluated for this award, which was established as a SGS&C award category in 2013.

“We are definitely seeing the quality of games increasing, making it a lot harder to determine the eventual finalists,” Armstrong said.

The Serious Games & Showcase Challenge is truly a partnership among those who are committed to the growth and development of Serious Games. Many volunteers representing Government, Industry and Academia play a large part in the success of SGS&C, as well as the sponsors who help ensure the winners are not only recognized by title but also awarded great prizes. This year’s SGS&C sponsors are: AutoDesk as the Overall Award Sponsor; Camber and Engineering & Computer Simulations as Platinum; ASTi (Silver); HP(Hardware sponsor) and Box (Submission sponsor).

Finalists will showcase their games at this year’s Interservice/Industry Training, Simulation and Education Conference, Dec. 1-4, with the category winners announced at a special SGS&C awards ceremony on Dec. 4.