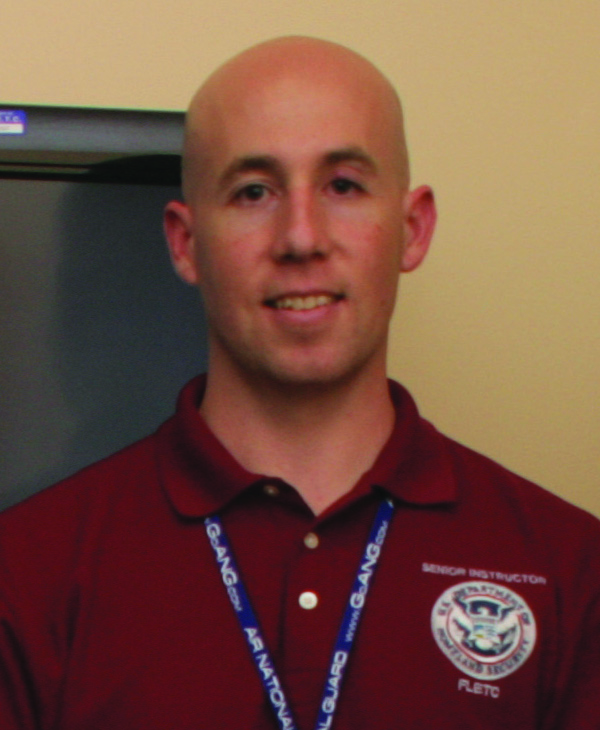 Jason Kuykendall serves as a Training Specialist/Program Manager from the Glynco Training Directorate’s Training Research Office assigned to the Federal Law Enforcement Training Center (FLETC) Orlando Technology Integration and Simulation Team. FLETC established their Orlando office in March 2005, with the partnership between FLETC and NAVAIR (Orlando) going back to 2004. Kuykendall joined the office in June 2012.

Although he started his permanent staff position for FLETC in 2008 at its headquarters in Glynco, Ga., Kuykendall also served as an instructor while working at the United States Air Force Office of Special Investigations (AFOSI) Academy, a partner organization of FLETC. Kuykendall spent six years as an AFOSI Special Agent, and during his tenure he worked in criminal investigations, counterintelligence, and counterterrorism investigations within the continental U.S., Europe and Iraq.

“The main reason for our presence here is being co-located with Team Orlando and the DoD entities who are focusing on modeling and simulation to improve human performance,” said Kuykendall. “The technology developed here can translate to a law enforcement environment,” said Kuykendall.

Given his responsibilities, having someone like Kuykendall with a law enforcement background, is particularly important to understand and evaluate potential training solutions to determine if it pertains to a law enforcement environment.

The move to FLETC’s Orlando office is a good fit for Kuykendall with his background. “I have a good understanding of the DoD – rank structure and how things operate in the DoD environment,” said Kuykendall. “I also have a civilian government service perspective. That combination is advantageous to me and the organization.”

Kuykendall left Air Force active duty to join FLETC, however he is a member of the Georgia Air National Guard, 165th Security Forces Squadron (AF military police). As the operations superintendent, Kuykendall is responsible for all law enforcement and force protection issues that affect Air Force resources; oversees operational issues that affect the security of a military base; and any deployment actions or operations for the guard, whether stateside or overseas for his unit.

With his FLETC responsibilities and his commitment to the Georgia Air National Guard, Kuykendall spends any free time with his wife and three daughters, ages 10, 8 and 2. “I love being involved with the kids and making them my big focus,” said Kuykendall. “If I could stay at home with the kids all day, I would do that.”

Kuykendall grew up in Artesia, N.M., a small town, where one learned right from wrong and taking care of the family was the focal point. “Family is number one and outside of that, everything else kind of falls into place,” said Kuykendall. Artesia is also the location of one of the four domestic FLETC training sites.

“I look at things from a different perspective than the standard military representative because I have different training goals in mind,” said Kuykendall. “I can assess quickly whether this would fit, or not fit. If I find something with a potential tie-in, then I can get a subject matter expert involved to make a full determination if it has a fit at FLETC, and if so, what would have to change to make it work?”

The DoD partnership has been good to FLETC, who has spent $4 million in order to leverage $174 million in DoD programs to their benefit. “Our relationship with Team Orlando has been valuable, especially in modeling and simulation, since we don’t have a large budget,” said Kuykendall.

With DoD partnerships thriving, one of the challenges is helping industry recognize that law enforcement is also looking at modeling and simulation as a way to provide training. “If we can help educate industry about what FLETC does, then more products could be geared with us in mind,” said Kuykendall.

Currently, FLETC is working on areas like mass casualty response, which is one of the most pressing domestic issues facing law enforcement, said Kuykendall, and they have identified technology that may be able to support applicable training. “FLETC is definitely leading the way in how we prepare officers for response to mass casualty situations,” said Kuykendall.

Medical simulation is another area of interest, and although it’s in the early stages for FLETC, they recognize the need for not only FLETC, but also components within the Department of Homeland Security. Their focus is on training for first responders, like law enforcement officers or firefighters, who may need to provide self-aid or buddy care.

“We are providing state-of-the-art training that could be supported by technology in modeling and simulation, and we’re looking at those to see how they could better support us in these areas,” said Kuykendall.

Moving forward, FLETC is looking at increasing and strengthening their collaboration with not only Team Orlando itself, but also members of the military and industry communities. “Partnerships are going to be key for us, especially with the budgetary issues we’re all going to face,” said Kuykendall. “FLETC will continue to look for the most efficient and effective way to accomplish the mission.”

“The FLETC could maintain some type of relationship even if we didn’t have an office here, because everybody on the Team Orlando Board of Directors understands FLETC’s mission,” said Kuykendall. “But being here in Orlando helps us keep a pulse on what’s going on and gives us face-to-face time with the other leads, which makes FLETC a first thought and not a second thought,” said Kuykendall.