Future soldiers get a peek at future training

Home » Future soldiers get a peek at future training 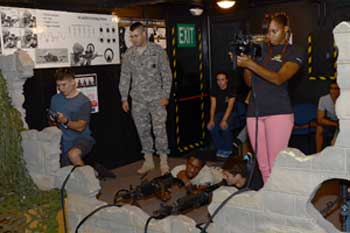 In the coming weeks, the U.S. Army will welcome their newest recruits, and some of them will be from the central Florida area. Part of that group will be headed to Fort Sill, others to Fort Bragg and still others to Fort Leonard Wood. But on Aug. 28, before they begin their journey, they were invited to see and learn a little bit about how Central Florida and the efforts of Team Orlando are impacting the training of U.S. military forces, and what they may see in the near, or far future, as it relates to their training.

Future soldiers use the Skills Engagement Trainer during a tour and briefing.

Their first stop was the Air Force Agency for Modeling and Simulation (AFAMS) to learn about the Air Warfare Simulation, which is part of the Air Force Modeling and Simulation Training Tool kit (AFMSTT). The demo showed the future Soldiers an exercise of an unmanned aerial vehicle (UAV) mission in a specific area, simulated through the Air Force Synthetic Environment for Reconnaissance and Surveillance (AFSERS) model. The AFAMS host discussed the command and control interactions necessary to execute this type of mission profile in the field.

“We need to create an environment for command and control that emulates the area of operations,” said Keith Henry, AFAMS’s LVC Enterprise Engagement Lead. “When you begin your training, you’ll be learning and preparing as an individual. What we do here is train on the operational level of war because it’s important for us to train like we’re going to fight.”

“Through this type of training, we can create an environment where decision makers can make informed decisions as to the application of Air Force weapon systems,” Henry explained. “It helps the Air Component Commander know where his assets are located, and assists them in seeing the big combat air picture.”

Henry, who served in the Army himself, offered up a “Hooah” or two during his presentation, and wished the new recruits good luck in the coming months.

After posing for a group shot in front of AFAMS, they headed over to the U.S. Army SFC Paul Ray Smith Simulation and Training Technology Center, renamed in 2003 in honor of Florida resident Smith, who was posthumously awarded the Medal of Honor for actions in Operation Iraqi Freedom. The recruits, like all visitors to STTC, paused for a moment before entering the STTC building to hear Smith’s story, one that inspires the STTC team each day in their work. 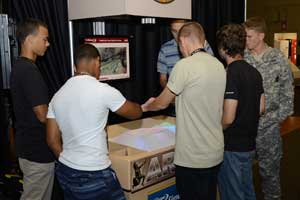 The Augmented Reality Sandtable (ARES) was a highlight of the visit for some of central Florida’s Future Soldiers.

“Our tour of the Team Orlando member facilities was outstanding!” said SSG Vincent Behan, from the Brevard Army Recruiter’s Office, who was the lead organizer for the tour. “The staff was very engaged and the displays were mind blowing. Most people know our military is technologically superior because they see it in the news and other media outlets, but don’t get to see it in person,” Behan said.

“Our future soldiers won’t get to actually experience what makes us superior until they get to basic training. This tour gave them a preview of that training, as well as some of the amazing things to come,” he said.

When asked about the highpoint of their visit, the group mentioned an appreciation and interest in all the areas they saw, but were especially intrigued by the ARES Sand Table and the Engagement Skills Trainer.

And as it turns out, the Engagement Skills Trainer will be something they will all see again, as it is a virtual system used in skills development related to firing weapons. The system is meant to enhance, not replace live fire training, and is initially used in learning the fundamentals of marksmanship, something these recruits will all need to learn and practice. But the trainer has continued use, and can help with advanced training techniques like breathing or trigger control.

The first stop for the recruits was AFAMS to learn about the Air Warfare Simulation, which is part of the Air Force Modeling and Simulation Training Tool kit (AFMSTT).

“Much of what you heard today was our engineers talking about where they fit in the development process on the early end,” Lt. Col. Joe Lisella, Military Deputy, told the future Soldiers as they gathered around after completing their rotations. “Depending on how long you stay in the Army, you might not see some of these things for a few years. But here at STTC, we’re thinking of the next generation, not just five years, but 30, 40 even 50 years out.”

Behan said that as recruiters, one of their most important tasks is maintaining their future soldiers’ commitments to ship out to basic. “It can be a challenge sometimes, especially with the ones that have a long gap between the day they enlist and the day they ship out,” he explained.

“The amazing things they were able to see and touch during the tour did more to solidify their commitment to becoming part of America’s Army than anything we could ever say to them,” Behan said. “They couldn’t be more excited to become part of the Army team.”