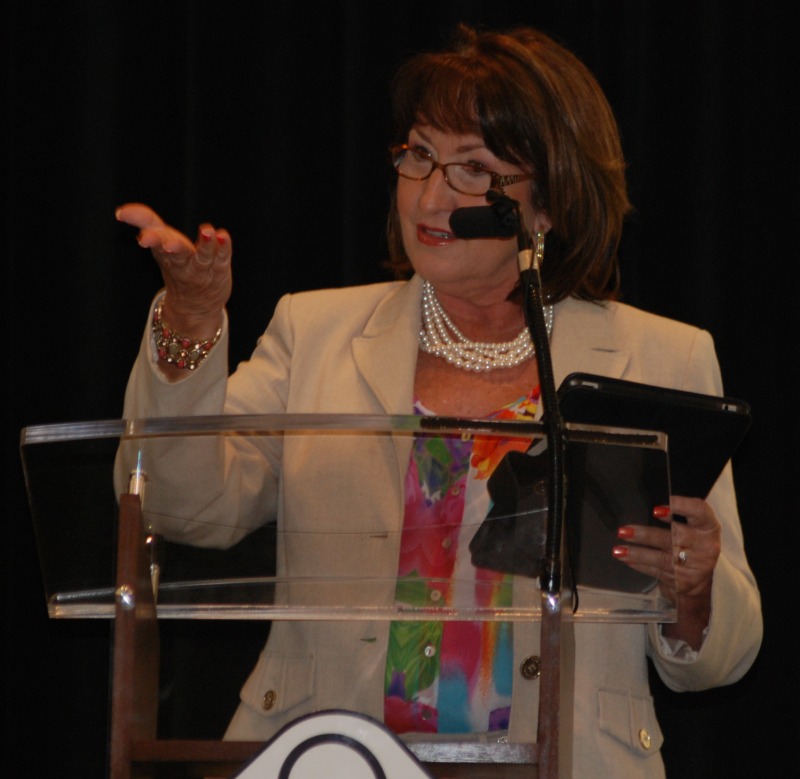 In the midst of travel restrictions and budget limitations, GameTech 2013 Thrills to Skills offered a compelling program for developers, users and supporting industry who attended the 2013 conference. “GameTech 2013 was a huge success,” stated Tom Baptiste, President/Executive Director of the National Center for Simulation and host for the GameTech Conference. “We are probably facing several years of declining Department of Defense budgets, but as we continue moving gaming and other technologies forward, we believe there will continue to be a need to bring the community together to collaborate and learn how serious games, virtual world technologies and mobile delivery platforms are evolving and how they can contribute to other market sectors such as healthcare, education, transportation and more. Our goal will be to meet this need and continue to offer a high quality conference program.” 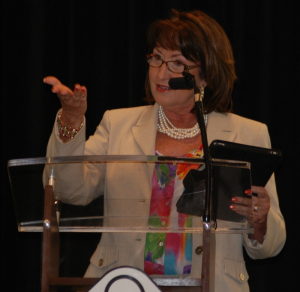 Orange County Mayor, Teresa Jacobs, addresses the GameTech attendees on the second day of the conference.

GameTech, held annually in Orlando, Florida, just ran its sixth year; a year where attendance significantly dropped due to restrictions on government conference participation. “We anticipated this drop,” said Baptiste, “but our program and message is so important that we made a conscious decision to go ahead with the 2013 conference. Our hope was to attract the right audience and offer the same quality program we offered in previous years, and we exceeded our expectations by every measure.”

GameTech brings together gaming professionals who share ideas, talk about their latest successes and failures. This year’s scaled back attendance exposed the die-hards, the people who really wanted to be there and thus opened intimate forums of productive conversation.

In addition to the dedicated conference attendees, the quality of speakers/panelists has been a consistent draw for GameTech. “The 2013 program line up was as strong as it’s ever been,” stated Brent Smith, Conference Chair. “Our speakers have significant knowledge and expertise in the gaming industry and they shared their fresh insight about the future of gaming, whether mobile, virtual worlds, or other areas.”

Government keynote, Mr. Frank DiGiovanni, Director, Training Readiness and Strategy, Office of the Deputy Assistant Secretary of Defense (Readiness), opened GameTech addressing two topics. He spoke about the fiscal environment within the Department of Defense and encouraged less focus on the cuts that are coming and more focus on our efforts of leveraging what we have. “We are on the verge of a major breakthrough, but we need to keep prospecting,” he stated. “I encourage everyone to look strategically at how to take your technologies to non-defense sectors such as energy, robotics and automation, telecommunications, production technologies and medical.”

Mr. DiGiovanni also spoke about the Virtual Framework stressing the importance of innovation while keeping a focus on the user. “I challenge you to look at successful programs. An interesting business model is mobile apps. Why? Because the most popular app is what consumers are using the most,” he said. Mr. DiGiovanni talked about the mindset of learning in young recruits and the veterans of the recent wars — their resilient comfort level with gaming. “We have men and women ages 18-30 that have been in the barracks for over 11 years, how can we capture what they learned? What if we had the capability to develop a vignette that documents what they have retained and teach them about programming?”

Industry keynote speaker and legend, Nolan Bushnell, Atari Founder, shared tech innovations in the gaming industry and what to look for when hiring employees. “What you really want to see is that intense passion, the overwhelming ability to just go for it.” He pointed out that often we try and fit people in a box. “Try new things. Give it room to grow. Be committed to making the world a better place. Ask how can you fit in and make it better,” he stated. Bushnell encouraged the audience to challenge the norm. He spoke of new technology that is up-ending traditional learning. Later, in a private session with college and university student volunteers, he expanded on his presentation and encouraged the students towards entrepreneurship.

GameTech’s mobile learning keynoter, Dan O’Leary, n-Space, enlightened the audience about embracing the impossible. “I can’t stress enough the importance of what we do (simulation and training),” he said. “For example, the success of our first responders (and the role our technologies play in their mission execution) demands that we get it right.” O’Leary pointed out that many people in this industry are ingenious and young. “They have high expectations as consumers so we have to make engagement fun. There is only room for a few top hits.”

Virtual Worlds keynote speaker, Bruce Joy, Vastpark, asked the question, “Why is the virtual world important now?” Joy went through a timeline starting with virtual worlds portrayed as an adventure. “In 2007 investment in virtual worlds went crazy,” he said, “with Skype, You Tube, Facebook and a universe where everyone has access to one other.” The next chapter in the virtual world story has yet to be written and Joy challenged the audience to continue to explore and develop valuable use cases.

During lunch on the second day of the conference, the Army Research Lab announced the winners of the 4th annual Federal Virtual Challenge (FVC). This year’s contest had two focus areas. Developers were asked to demonstrate Critical Thinking or Adaptability training within an immersive virtual environment while tracking individual progress. The second category was seeking low-cost, multiuser navigation interfaces for virtual worlds.

GameTech’s last day supplied a succession of panels and tutorials about virtual reality, different simulations and the sharing of technologies bringing home the message of this year’s theme: Thrills to Skills. “GameTech continued to be the place where the leading companies show how gaming technology can help support the Warfighter,” stated Scott Hooper, 2013 GameTech Program Chair. “We provided a venue where industry leaders gathered face-to-face to explore current capabilities related to games, mobile technologies, and virtual worlds. It was especially exciting to preview the newest technologies, moving game technology, which has expanded into worldwide gaming for all types of air, land & sea training.”

There are many dynamics that played a winning part in GameTech’s success. A key component is the committed group of local volunteers comprised of community leaders and specialists with a game developer’s focus. As leaders in Orlando’s modeling and simulation industry, they have demonstrated a continued dedication to GameTech’s mission. They have been the voice this year expressing, “the show must go on because it is a valuable contributor to the advancement of gaming and gaming technology.”