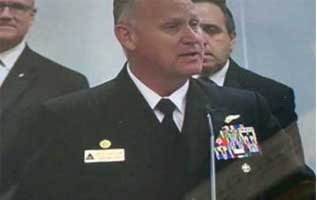 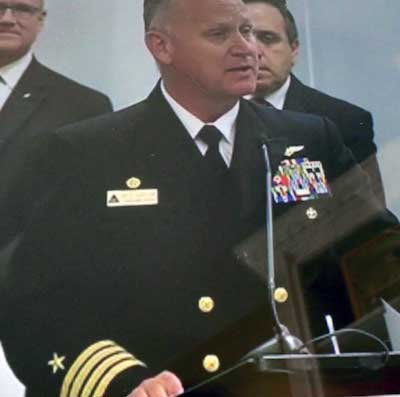 Capt. Wes Naylor addresses the Governor and the Florida Cabinet on Nov. 10 about funds for an additional Partnership building.

The Cabinet agreed to spend $13.89 million to buy the SAIC Software building close to NAWCTSD, which will be transformed into a secure facility, occupied mostly by the Army.

“This is an important step to reduce the cost associated with reliance on commercial office space and to protect Team Orlando from possible future rounds of BRAC. Protecting this epicenter for modeling and simulation, known as Team Orlando, has been a top priority of the Florida Defense Support Task Force and our local community,” Baptiste said. 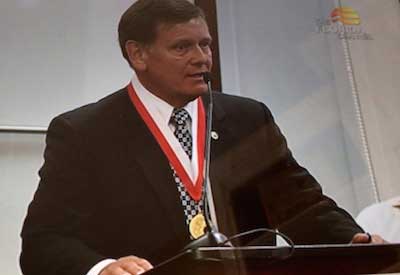 Retired Lt. Gen. Tom Baptiste told the Governor and his cabinet that protecting Team Orlando has been a top priority of the Florida Defense Support Task Force and the local community.

Team Orlando military partners including NAWCSTD; the Program Executive Office for Simulation, Training and Instrumentation (PEO STRI); the Air Force Agency for Modeling and Simulation (AFAMS); and the Program Manager, Training Systems (PM TRASYS); plus nine other federal government organizations, work closely with the University of Central Florida Institute for Simulation and Training to improve human performance through simulation.

“The opportunity for collaboration between the military and UCF’s Institute for Simulation and Training that is afforded by our close proximity is truly priceless,” Naylor told the Cabinet.

“I know of no place else in the United States where all four branches of the Department of Defense can easily network, not only with each other, but with one of the nation’s premier research institutes focusing on advancing human performance through modeling and simulation technology,” he said.

While NAWCTSD is fully self-contained in the Navy Base, the U.S. Army, U.S. Air Force and other federal government Team Orlando organizations spill out into 200,000 square feet of commercial leased office space in Orlando and collectively pay about $5.4 million a year in rent.

Maj. Gen. Jon Maddux, Program Executive Officer for the U.S. Army PEO STRI, stated that he is very pleased with the State of Florida’s decision to fund Partnership 4. “The purchase of the SAIC building will allow the Army to reduce a great amount of leased space for its current requirements, thus saving taxpayer dollars. We look forward to the opportunities that this decision will provide to the Army and to Team Orlando,” he said.