How It All Came Together for UCF’s IST

Home » How It All Came Together for UCF’s IST

Nearly 20 years after the Army and Navy moved to Orlando, UCF’s president Trevor Colbourn organized the simulation based research scattered around campus and made it into an official program.  Up until that time, simulation research was unstructured and randomly supported  faculty and students, yet was providing academic support and contract research for the two defense training centers. An organizational structure was in great need. 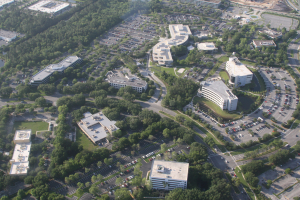 An aerial shot of Partnership II and III Buildings on UCF’s campus.

In August 1982, responding to a proposal that would lead to the creation of UCF’s Institute for Simulation & Training (IST), the Florida Board of Regents added IST to the State’s official list of institutes and centers.  It took a few more years for the Florida Legislature to authorize funding but the doors officially opened in May of 1985 under the leadership of Wei Chen, an “outsider” enticed to leave General Electric for the IST post.

Chen didn’t waste any time and ten months later the ground-breaking of the Butler Building, IST’s first home, was under construction in the university’s facilities area. Soon after the building had finished, Chen moved back to his former company and A. Louis Medin, recruited from IBM, took over the reins as IST’s director.  “Dr. Medin came equipped with a ‘my way or the highway’ philosophy, determined to steer IST away from the grasp of any special interest groups and put it on the road to becoming a truly multidisciplinary institute,” according to a 30-year history prepared by IST staff member Randall Williams.  “He was determined to steer IST toward becoming the multidisciplinary institute that it is today.”

During Dr. Medin’s 12-year leadership, he witnessed IST’s growth from a staff of 29 with $2.5 million in contract and grant support to more than 150 researchers and professionals with close to $5 million in projects. In what seemed like no time at all, IST outgrew its trailer-size temporary headquarters. To consolidate the research, some of which was conducted in other campus buildings, the institute moved into the Research Pavilion late in 1988.  “The move proved auspicious, for now IST was right next door to its two defense partners – and one of them, the Army, had two tank simulators to spare,” stated Williams.  The two tanks’ location outside the gates offered the first real opportunity for local politicians and military leaders to come by and experience a phenomenon that hadn’t yet been marketed or solidified as “training,” yet was quickly emerging as the science of simulation.

For the next five years, IST charged forward with breakthroughs in simulator networking and computer-generated applications for war gaming.  The research at UCF impressed U.S. Senator Sam Nunn, then the Senate’s Armed Forces Committee Chair, who declared Central Florida as the nation’s hub of simulation technology and UCF as America’s leading simulation researcher.

The recognition IST was receiving as the nation’s example was gaining more and more attention, and in 1997 Florida Governor Lawton Chiles, after touring the Central Florida Research Park, publicly proclaimed the area as “the National Center for Simulation.”  Included in the proclamation was IST and the industry-connected Training and Simulation Technology Consortium. According to Williams, the Consortium later adopted “National Center for Simulation” (NCS) as its own name.

With partnerships taking first priority, UCF offered land to Orange and Seminole counties to build a fire station on campus and a training building located behind it for crisis managers.  The groundwork was also laid to renovate the building that was to become IST’s Central Florida Technology Development Center and home for what is now the Army’s SFC Paul Ray Smith Simulation & Training Center (STTC), the Army’s research labs and offices.

In addition to these two buildings, UCF Partnership I was erected, becoming the first office space that housed both government simulation workforce and UCF students conducting research in one location.

Another turning point for IST came in 2002 when Dr. Randall Shumaker joined the staff as IST’s fourth director.  A former Navy employee, Shumaker brought more than 30 years of engineering and computer engineering experience, plus a passion for autonomous systems. Dr. Shumaker immediately started pressing the absolute need for collaboration among the many diverse disciplines that he felt must come together to result in effective use of M&S for successful training.

“Without knowledge of how people learn best and how technology can be applied to create lasting learning experiences, a simulation is just a ride in a theme park,” says Williams. “From the beginning, Dr. Shumaker has been keen on bringing together research from psychologists, computer scientists, learning theorists, human factors engineers, historians, mathematicians and others.  This disciplinary diversity is one of the reasons IST is so difficult to explain, but it’s also why the institute has continued to grow.”

Partnership I was such a huge success that another state-supported opportunity for more advanced construction led IST to design and build the Partnership II and III buildings. In November 2004, the institute moved some of its labs and offices onto two floors of the five-storyPartnership II building. Six years later, the labs and offices that remained in IST leased space in the Bennett Building on Progress Drive and a new high performance computing center temporarily housed in the University Tower across the street, moved in to the first and second floors of the newly completed Partnership III, designed as a mirror of Partnership II, to save costs. As the names imply, the buildings are occupied by a mixture of IST, UCF and defense agency tenants.  Partnership III opened in October 2010.  Today these buildings are home to UCF’s Institute for Simulation and Training and Modeling and Simulation acquisition components of the US Army and US Marine Corps.

While the idea of partnership buildings was forming, IST set in motion a master’s and doctoral simulation degree program in 2002, and now can claim to be the number one program of its kind in the nation.  Since then, IST’s clientele has grown and diversified.  Although the Department of Defense remains a large part of their business and grant support, IST has attracted a wider range of clientele from industry giants like Google, Microsoft and Johnson & Johnson, to government agencies like the U.S. Department of Education and Federal Aviation Administration. They also work with health care providers with similar training goals, as well as museums and science centers looking to simulation to enhance their exhibits’ learning value.

In the years that followed, Research Park and its surrounding area grew to become, without a doubt, the nation’s highest concentration of companies and agencies dedicated to simulation- and training-related research and development – with UCF as its largest and most loyal supporter.  UCF IST has led the way for the diversification of modeling and simulation by other federal agencies and industries conducting more than $15M annually in funded research.  Where is the future headed?  Look at today’s research for a glimpse of tomorrow.

Research and information cited from http://www.ist.ucf.edu/historylesson.html