I/ITSEC 2021: A History-Making Look into the Future of Modeling and Simulation

Home » I/ITSEC 2021: A History-Making Look into the Future of Modeling and Simulation 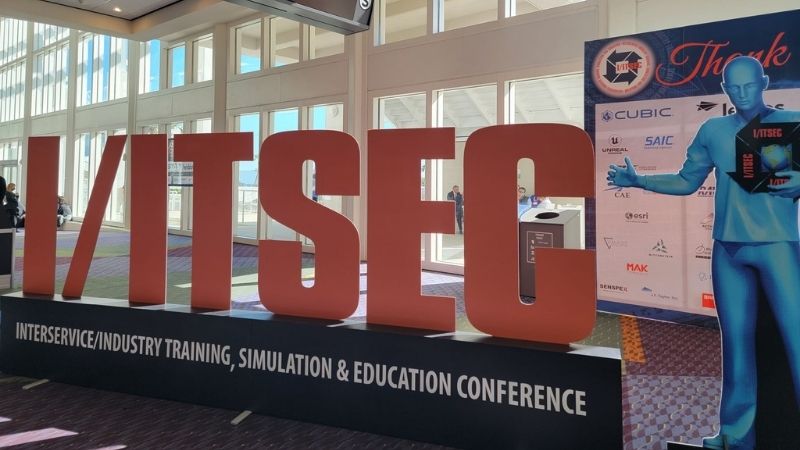 The Interservice/Industry Training, Simulation, and Education (I/ITSEC) Conference lived up to its theme, “Innovating and Accelerating Training: Adapting to an Unexpected Future!” this year as it began with what many believed was an unexpected present — a return to a face-to-face conference that was keynoted by two military service chiefs for the first time in its history.

“From great challenges comes great opportunities,” said Jennifer Arnold, 2021 IITSEC Conference Chair, during opening ceremonies, “and this year’s conference is a great leap in that direction.”  She continued that the conference included 35 special events, 122 paper presentations, 23 tutorials, 10 professional workshops and over 200 exhibitors to “inform and guide the latest learning and simulation trends, practices, and technologies.”

Admiral Michael M. Gilday, U.S. Navy Chief of Operations, and General David H. Berger, U.S. Marine Corps Commandant, joined industry speaker, Bob Pette, vice president and general manager, Professional Visualization at NVIDIA, during opening ceremonies, Nov. 29, to talk about the importance of modeling and simulation for training as we fight and anticipating how we will fight in the future.

“We’ve been working on concepts that enhance those distributed maritime operations for a number of years now,” said Gilday, “and that includes the Marine Corps advanced basing operations concept as well as their concept of operating in contested environments.

I/ITSEC’s first day was marked by the MS&T Congressional Caucus where members shared their perspectives on the value and potential of modeling and simulation throughout U.S. government operations and planning.

Congresswoman and Caucus co-chair Stephanie Murphy (Florida 7th District) began her presentation with recognition of Team Orlando as “the lifeblood of the MS&T community in Central Florida.” Murphy highlighted potential contributions in emerging technologies like “digital twins” to applications across a range of climate-change issues.

“I don’t have to tell you, but leading technology companies are working on what they call the metaverse, which is an immersive virtual environment capable of replicating the physical world,” she summarized. “Gaming, exercising, modeling and simulation are all the foundations for the commercial applications of this metaverse. And I think our community is well-positioned to be the future. Immersive technologies have broad application in everything from warfighter training, to improving physical infrastructure, to responding to climate change, to expanding the metaverse. What you are doing is critically important to every part of American life; American security. I’m excited to champion these efforts to work with all of you, shoulder to shoulder, to advance those efforts and to represent this industry on Capitol Hill.”

In addition to the three members of congress attending I/ITTSEC, the panel included a video presentation by Congressman and Caucus member Robert Wittman (Virginia 1st District). Wittman observed that I/ITSEC served to “bring folks together to talk about how incredibly important modeling and simulation is, not just in the defense sector, but in all aspects of technology development.”

Several of the signature and focus events looked at the future of training including the breakthroughs and implications of innovations like digital twinning, Human-AI interaction, extended reality, and haptics. Key events included: Exploring the Challenges of Human-AI Teaming; The Future Application of Extended Reality; Artificial Intelligence to Enable Mission Command; A New American Way of Training; Building a Comprehensive Modeling & Simulation Body of Knowledge; and Learning to Learn Together: How Will Human-AI Teams Achieve Mastery.

Continuing to look to the future of training, or rather the future training developers, was I/ITSEC’s IronDev and Serious Games Showcase and Challenge.

The IronDev competition allows junior developers across industry and various government labs to demonstrate their skills and abilities to develop innovative augmented reality and virtual reality solutions for military training challenges. First introduced to I/ITSEC in 2019, IronDev teams are provided with a specific challenge, a “secret ingredient,” and a limited time to develop a solution. This year, the teams were GRILL (USAF Research Lab), 3D Media (3D Media), Tom Cruise Control (i3), and Agenium 3D Lab (Agenium France). The winner of the best overall solution and People’s Choice Award was Tom Cruise Control by i3, and 3D Media (by 3D Media) was named most innovative solution.

I/ITSEC Serious Games Showcase and Challenge (SGS&C) is a quest to find the best serious games created by government, industry, or students/academia. This year, SGS&C celebrated winning games in six categories. Read about the winners here.

The 2021 I/ITSEC was concluded with an awards banquet on the evening of Dec. 2. The event included achievement awards, scholarship presentations, and conference awards for Best Paper and Best Tutorial.

Capt. Dan Covelli, NAWCTSD commander, awarded Diana Teel with the Meritorious Civilian Service Award for her dedicated work over the past 10 years as the Navy Principal for I/ITSEC. Dual-hatted as both NAWCTSD’s outreach director and the NavalX Central Florida Tech Bridge director, Diana is recognized as a true leader.

The NTSA 2021 Lifetime Achievement in Modeling & Simulation in Industry was awarded to Andre Elias of Lockheed Martin. Elias shepherded the future of simulation to improve military training throughout his 40-year career in the modeling and simulation industry. His contributions increased concurrency between platforms and simulators to create the most effective training programs — bringing about a revolution in how military personnel train for the fight. His life’s work increased the mission readiness of countless service personnel worldwide.

I/ITSEC’s 2021 conference chair, Jennifer Arnold, concluded the event and the conference by passing the flag to next year’s leader, Matt Spruill of Trideum Corporation.