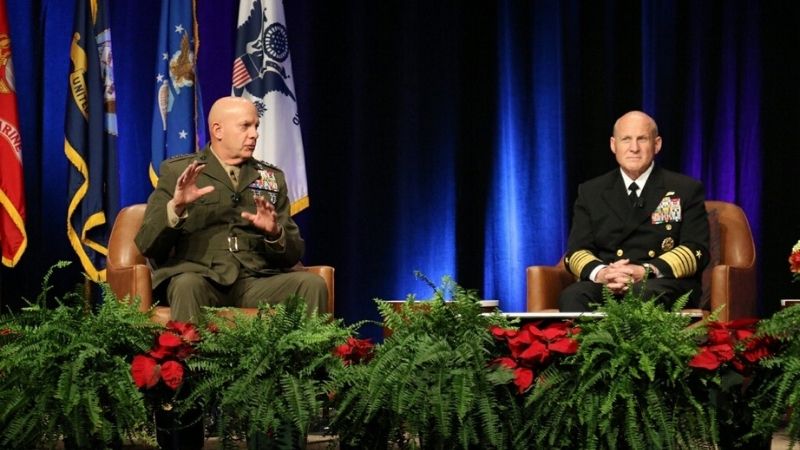 In the conversation-styled question-and-answer session, several themes emerged from both Admiral Gilday and General Berger that parallel Boyd’s quote: diversifying, training, and empowering the workforce, prioritization of training in the operational architecture, adversarial overmatch and the urgency required in modernizing and integrating systems.

Diversifying, training, and empowering the workforce

“We need to actively, deliberately, and intentionally diversify the workforce,” said Berger.

The Navy and Marine Corps are on track to be the most diverse workforce of the DOD services according to the Chief of Naval Operations. “We are not taking people for granted,” Gilday said. “We value diversity — and not just race and ethnicity, but also life experience. We typically require a four-year degree for the civilian workforce but there are a lot of skilled hackers that don’t care to have a degree,” he said.

That talent exists inside the U.S. Navy but is not being used effectively, according to Gilday. In addressing the threats facing the military today, Gilday believes diversity and individual responsibility means allowing access to information that wasn’t considered before.

“It’s taking a look at the workforce demographically and the opportunities that exist and thinking more creatively,” he said.

In diversifying the workforce, considering the individual service member, and thinking creatively about the technology available, the Navy and Marines are making efforts to improve training and develop skillsets at a faster pace.

“I acknowledge skillsets we are going to need in the future that will require more technical aspects,” said Berger. “That said, they [new recruits] are digital natives anyway. They’re gonna pick up on the skills sets quickly — faster than we imagined they would. But we need to provide them the opportunity to do that no matter their background.”

The Navy is moving to self-paced model of training, but not fast enough, he said.

“We want Marines and Sailors who learn at a faster rate to have a system that will go at their speed, not the slowest common denominator because that’s what the curriculum says,” Berger explained. “We’re further ahead in aviation, where all of us could start flight school next Tuesday but not graduate at the same time. We are learning that it’s not truly self-paced if everyone shows up on the same day and everyone graduates on the same day.”

Technology will play a big role in the transformation of the education and training of service members. Berger stated that establishing an operator’s baseline is key.

“Identifying who you are as an operator as you come in, and how you evolve and learn moving forward, is the right model,” he explained. “As an example, I can plug in my profile into any Peloton in the United States and begin training where I left off. We can bring that to military training.”

“Where the technology helps is understanding where those deficiencies are, so if you put a pilot in a cockpit, he can focus on those areas of deficiency and get much more bang for the buck out of that training,” said Gilday. “Each trainee can evaluate their own skills and deficiencies as well as be able to look at it collectively, which gives a much better look at human performance factors. Eventually we can take those human factors, like operator well-being, and determine how that effects training and where you really stand with respect to readiness.”

“We also don’t incentivize people to learn faster or learn more,” said Berger. “We have to incentivize that kind of learning but there’s no structure for that.”

Prioritization of training in the operational architecture

Adm. Gilday led the discussion by saying, “Live, virtual, and constructive (LVC) training capabilities have allowed us to test ourselves to mature our warfighting concepts, to hone our skills, to sharpen those skills, and to learn from them.”

But to put training into the big picture, Gilday continued, “It’s important to talk about how the Navy and Marine Corps operate and fight during crisis and conflict. And that is as an integrated, distributed force that is coming at an adversary through many vectors and across multiple domains simultaneously.

“I grew up thinking of training and simulation as a way to train to a certain [skill] level on a platform or weapon system,” said Gen. Berger. “And I think that was good enough because we were our own competition. But, when you’re driven by another adversary, an adversary with similar capabilities and perhaps a bigger force, the determining factor is not how good you are on a platform,” said Gen. Berger. It’s how you can think. Can we outthink the adversary?”

Gen. Berger suggested that to do this, training must become a priority. “We have unintentionally placed training third or fourth in the sequence of priority. We go after a capability, we figure out how we’re going to structure the force, we buy platforms, and then we turn to the training guy and say, ‘we need a way to train on that’. That’s not going to work going forward. I think training has to get to the front of the line.”

To that end, the training and education commander was changed to a three-star officer last year, and the Marine Corps training commander is now a two-star general.

“Their resources are now equivalent to manpower and combat development,” said Berger.

“It’s easy to take your eye off training,” Gilday said, “but we’ve made training and readiness a priority. We are funding new platforms and looking at what we should invest more in and what we should look at sundowning to invest that money somewhere else.”

One area the leaders believe needs attention is the integration of platforms, networks and proprietary systems.

“How do we fuse and link them [proprietary systems] together so the Marines, Navy, and Coast Guard elements train and operate together?” said Berger. “Further, how do we bring allies and partners with us into a collaborative environment?”

“We are also looking at fleet battle problems, large-scale exercises, wargaming, and the analytical framework that supports all of that,” said Gilday.

“I am looking forward to the future where the new data strategy will be integrated rather than legacy systems with individual data systems and strategies,” said Berger.

Adversarial overmatch and the urgency required in modernizing and integrating systems

Prioritizing and investing in training supports the military as it seeks adversarial overmatch on the battlefield. Another key element to overmatch is the modernization and integration of infrastructure.

“We’re ever more connected but we’re limited in bandwidth at sea,” said Gilday. “So, as we invest in unmanned systems at sea and in the air, we’re not going to be able to command and control that number of things given the network framework we have now.”

To design a better operational architecture, the Navy began an effort called Task Force Overmatch. One of the goals of the effort is to deliver a software with a defined communication as a service framework.

The software-defined network of networks, Gilday said, will allow data to be contained and moved across any network and scaled broadly to the fleet.

“We are attempting to create a joint grid because the stuff we have, the stuff we buy and the stuff we need has to come all together, whether in an exercise or an actual operation,” Gilday said. “The training aspect must be integrated into the Navy operational architecture. There is no way it can be separate — it’s unaffordable, it’s inefficient, and it’s another security issue for us.”
“The bottom line is we can’t have a bigger force than we can sustain,” said Gilday. “A critical part of that sustainment has to be training readiness of the force today.”

For Berger, adversarial overmatch means being able to think like the enemy.

“We can’t replicate the adversary, said Berger, because we can’t separate ourselves from our training and how we were brought up. We need help creating a force-on-force construct that replicates the adversary in an LVC environment.

“Part of the value of a Synthetic Training Environment (STE) is that you can do things you don’t want the adversary to see,” Berger continued. In Project Overmatch and the larger C2 environment, we have to bake in ways to train that are resilient, because we assume they [the adversary] are going to go after networks and it will be in a denied and degraded environment without being seen.

“We need people to hold two different flashlights,” concluded Berger. “One like a headband type of light that sees things that are possible right in front of you, but you can’t put down the magnifying light that sees way down the road. Tell us what’s possible in the next six months, and what’s in the art of the possible in 18, 24, and 36 months from now.”