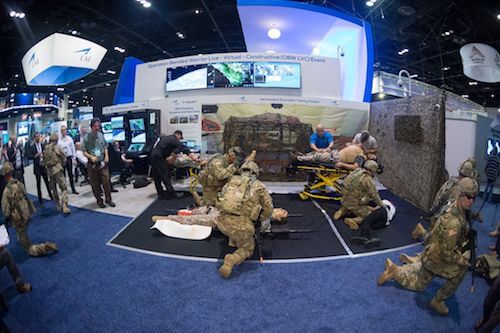 As Team Orlando kicked off 2017, the Services were still basking in the opportunities and achievements that came with the 2016 Interservice/Industry Training, Simulation and Education Conference (I/ITSEC), the world’s largest convention that focuses on training systems, education, and simulation technologies. I/ITSEC celebrated its 50-year anniversary, while the year also commemorated the 75th anniversary of the Navy Special Devices Desk created by Commander Louis de Florez, and the 66 years that the Army and Navy have been working together. 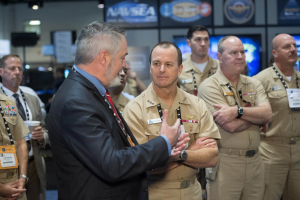 I/ITSEC began 50 years ago at the Navy Device Training Center with a vision to have meaningful discussions between industry and government about what was going on, and what were some of the acquisition challenges they were facing. This unique gathering of government, industry, and academia continues to grow, and although this year’s I/ITSEC was an “Air Force-led” year, they were not the only Service to have participation from senior leadership. Along with the Air Force, the Army, Navy, and Marines all had four-stars attend this year’s conference.

“One of the more valuable things about I/ITSEC is that it brings together industry and government components of industry that we don’t typically see at our other forums that are heavily military oriented,” said Vice Admiral Paul Grosklags, Commander, Naval Air Systems Command. “It’s a very diverse group and quite honestly, I think that’s why it lasted for 50 years, because it is a unique experience.”

Live, Virtual, Constructive (LVC) is a hot topic for all the Services, and at I/ITSEC the U.S. Air Force presented a panel of senior leaders to explain how they are looking to employ an LVC training approach across the breadth of their training missions.

According to the panel, while the Air Force had an excellent grasp on the live and virtual parts of the puzzle, the introduction of constructive training was essential to meet the changing threat landscape.

Among the panel members was Major General Thomas Deale, director of operations, Air Combat Command Headquarters. Deale said their infrastructure for training doesn’t necessarily meet all of their training needs, especially looking at the high-end fight — the anti-access, area denial environment they are potentially going against. “That’s what’s really driving our shift toward an LVC training construct,” he said.

What they do know is that live training will always be a part of the plan, and that virtual needs to increase in both capacity and capabilities. Deale said, “There is going to be a shift toward a common environment with which we can all play in the constructive or virtual, and we need it to be an open system as well — we can’t have proprietary ownership of that. That environment will also include the threat emulation, the weapons systems emulation and the connectivity and protocols that go into connecting to this training environment. And we are working toward that approach.”

Making matters even more challenging, Deale expounded on the significant networking requirements for a constructive training environment, and the fact that their LVC-OT construct must be multi-domain, cover the full spectrum of operations and be scalable, supporting day-to-day training and all the way up to the large exercises.

And with the majority of their simulators built before the widespread adoption of distributed learning, they are inadequate to train for the complexity of modern operations. Deale added that coupled with that, “we have to come up with a responsive acquisition strategy … or we’re going to price ourselves right out of business.”

The Navy booth at I/ITSEC was buzzing during the four days of exhibition, and front and center was Sailor 2025, the CNO’s vision of the 21st century sailor. Sailor 2025 focuses on three main pillars: modernizing the personnel system, enriching the culture and ready, relevant learning.

Captain Erik Etz is commander for Naval Air Warfare Center Training Systems Division in Orlando, Fla., and their focus is the ready, relevant learning piece. “We are taking a holistic look at how training is done and in many ways, bringing a modern capability to deliver that training in a more time appropriate sense, and in many cases, a location that is more appropriate than we are currently doing,” he said.

The Navy wants to be sure that they are going to deliver the right training at the right time at the right place for the sailor, and also take into account how a sailor learns.

“Every sailor learns just a bit differently, right?” asked Admiral John Richardson, chief of Naval Operations. “I might be a visual learner, you might be someone who benefits from reading or seeing a diagram.” Part of the feedback, he explained, was understanding how each sailor learns the best. With all sorts of possibilities, the Navy has to start collecting the data, feeding it back, and then the training system learns how to teach each sailor.

Etz said that sailors of today will be impressed by the direction the Navy is going. “We are really trying to harness the best that industry has to offer to ensure that we are keeping pace with the things that they take for granted,” he said. “They have all grown up with video games, they have grown up with mobile devices, and there is no reason we shouldn’t take the best of those capabilities and apply them to the way we train ourselves.”

One of the truly collaborative missions that was showcased at the 2016 I/ITSEC was the Squad Overmatch Study, led by Program Executive Office for Simulation, Training and Instrumentation, and winner of the 2016 Team Orlando Collaboration Award. Throughout the development of Squad Overmatch, the collaboration has continued to grow, involving a team of more than 45 personnel coming from all four Services, government agencies, industry and academia.

Squad Overmatch is a crawl-walk-run integrated training approach that helps train war fighters in a collective and immersive environment in the areas of judgment development, decision making, team leadership, communication skills, and the mental models that they need to draw from in stressful tactical situations.

Squad Overmatch showed the power of their capabilities live in action as part of Operation Blended Warrior (OBW) at I/ITSEC 2016. Industry and government participants, along with members of 316th Calvary Brigade and 1-29th Infantry from Ft. Benning, Georgia, integrated with unique systems in the OBW Live-Virtual-Constructive environment. Their involvement was showcased during a scenario in which the squad jumped into action to provide medical care to victims of a detonated bomb, and then followed orders which took them throughout the I/ITSEC floor into the booths of several other OBW participants.

Operation Blended Warrior (OBW), in its second year, was the highlight event at I/ITSEC; the Navy provided the architecture and technical leadership, as well as overall directorship. Initiated in 2015, OBW participation greatly expanded from 31 to 50 including all four Services, academia and industry. The number of unique capabilities the team integrated together almost doubled. By the end of the event, over 90 disparate systems (including an industry-provided live aircraft, and the live Squad Overmatch soldiers) were integrated into a single 7.5 hour long LVC event that spanned five different operational domains.

VADM Paul A. Grosklags attended I/ITSEC and stated “A lot of people, myself included, tend to talk about LVC like it is here today. The fact is we are nowhere near the long term vision of being able to tie many simulators, many live ships, constructive threats into a real operating environment. There are some technology constraints to do that, there are some resourcing constraints to do that, but overall it is going to take time. So there are a lot of things we’ve got to get to along the way; technology improvements, updating of our existing capabilities to enable them to operate in that environment.”
OBW was conceived as a multi-year, Live-Virtual-Constructive (LVC)-focused special event. The premise behind the event is to determine why the level of effort (time and personnel) to develop LVC virtual environments, and the subsequent integration of disparate systems within, has only slightly improved since the first integrated event in 1992. While individual capabilities used with and within these virtual environments have improved, the foundational development and integration efforts have not.

OBW focused on standards, after-action review, cyber-contested environments, performance measurements and multi-level security/cross-domain solutions. Taking advantage of the collective LVC intellectual capital participating in the event, a concerted effort was undertaken to collect data involving the set up and execution, and their associated challenges to the extent possible. Follow on collective analysis will help determine potential solutions to uncovered challenges.

Looking Ahead at I/ITSEC 2017 and Beyond

I/ITSEC 2016 was attended by several senior military and civilian leaders from all the services, including 37 Navy flag officers and more than 50 Senior Executive Service civilians. Leading the contingent of flag officers was the Chief of Naval Operations, Admiral John Richardson.

During his keynote remarks in Wednesday’s session, “A Design for Maintaining Maritime Superiority: High Velocity Learning at Every Level,” Richardson said that I/ITSEC was the “Disney World for Training.”

He added, “If you have any sense for what I think is important, you know that I am completely committed to learning.” Richardson said he was going to mark I/ITSEC on his calendar going forward – a regular stop.