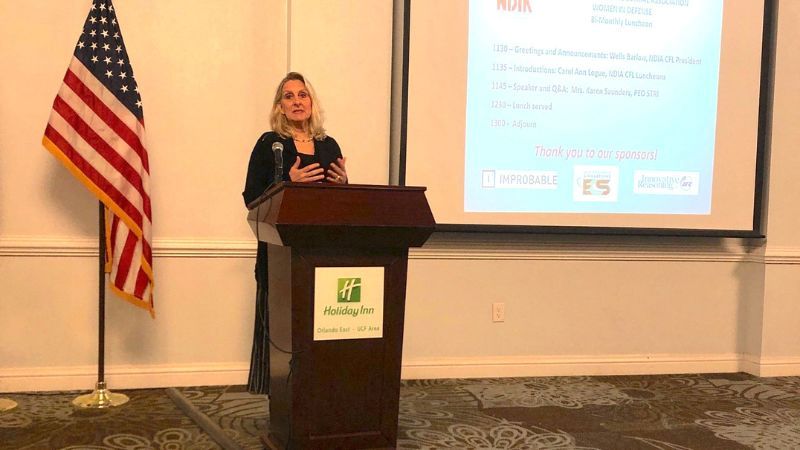 As an affiliate of the NDIA, WID’s goal is to cultivate and support the advancement and recognition of women in all aspects of national security and provide women with a formal environment for professional growth through networking, education and career development. With a career in defense that spans over 35 years, with multiple, previous assignments in and outside of PEO STRI, Saunders’ career exemplifies the mission of WID.

Saunders began her acquisition career in the military as the project director for the Tactical Simulation and Warfighters’ Simulation Intelligence Models, at what was then the Simulation, Training and Instrumentation Command (now PEO STRI). She left for another assignment and later returned as a colonel, serving as the project manager for Constructive Simulation. As a civilian employee in the Senior Executive Service, Saunders is now the program executive officer for PEO STRI and described herself as having professionally “grown up” with the organization.

Saunders gave her audience a summary of PEO STRI’s mission and provided some recent updates on her organization, to include closing the year with over 1,600 contract actions valued in excess of $1.3 billion. In addition to developing capabilities, getting them to the field, and supporting soldiers already in the field, Saunders said PEO STRI is actively working to enhance processes within the organization.

“We’re now standing up an effort to build an enterprise architecture across STRI,” Saunders said. “For the last 30 years at PEO STRI, we’ve pretty much stove piped our architectures across the live, virtual, constructive domains. We’re now going to create a single enterprise architecture basing it off the work we’re doing in Synthetic Training Environment (STE), but also leveraging what we’re doing with the Persistent Cyber Training Environment and our LT2 [Live Training Transformation] product line – taking the best of the best and pulling it together.

“It’s recognized at the Army level… that this is a very special place down here with government, all the services, industry, academia, and all of our nonprofit organizations that are the glue that keep us all together,” Saunders said. “It’s great that we have this environment, and it makes my job a little easier.”

The secretary of the Army’s priorities and objectives received special mention during Saunders’ address because PEO STRI’s daily operations are nested in those priorities.

“The Army’s top priorities are people, readiness and modernization, and when you think about it, PEO STRI has a leg in each of those pillars,” Saunders said. “We can’t do our mission without people and we need a talented workforce… soldiers in the field today are able to do their jobs [because] we provide the training systems that allow them to build the muscle memory [necessary in conflict] they receive from our products… [and modernization not only means] providing new capabilities to the field, but looking at new ways to do business and how to be more agile in getting capabilities to the field quicker.”

Next, Saunders outlined the Army secretary’s six objectives, briefly describing important areas they touched on, and how they would affect PEO STRI’s mission going forward.

“Three of them focused on people, one of them on changing climate, one focused on data, but the first objective was to put the Army on a sustainable, strategic path during these challenging and uncertain times,” Saunders said. “PEO STRI, in all our modernization efforts, is focused on supporting the secretary in strategic initiatives for the Army of 2030. We’ve spent 20-plus years fighting a [counter insurgency] fight, and now we’re coming into a different domain with a new set of near-peer competitors as discussed in the National Defense Strategy.”

According to Saunders, this new period in history means the Army is using its modernization efforts to discover what it needs to look like, not only to handle potential conflicts of today, but also in becoming the Army of 2030.

Saunders briefly described the role of the Office of the Assistant Secretary of the Army for Acquisition, Logistics and Technology, also known as ASA(ALT), in modernization efforts, in accordance with the secretary’s priorities.

“Their mission is to continuously modernize the Army as part of the joint force through rapid and timely delivery of soldier capabilities that deter adversaries and win our nation’s wars,” Saunders said. “[Douglas Bush, head of ASA(ALT), and Young Bang, his principal deputy] have proclaimed that 2023 is the ‘year of digital transformation’ for the Army.”

Saunders said Bush has told her and the other program executive officers that they will focus on developing and providing capability to the force.

“We’ve all got the message and my project managers understand that, so we’re on a good path, but it takes a team,” Saunders said. “Being agile is truly a team sport, and it goes beyond those of us in this room.”

PEO STRI is charged with providing testing, training and information operations capability to the Army. Saunders explained that every soldier in the Army uses, or will have used during their enlistment, one of the training products that PEO STRI puts in the field. With over 260 programs in its portfolio, this equates to approximately 300,000 products worldwide. PEO STRI also provides test capabilities to the Army’s Test Evaluation Command and the Office of the Director, Operational Test and Evaluation, making its customer base much larger than simply the Army.

“We know we can’t do our mission by ourselves, and being here in Orlando, close to industry, is key,” Saunders said.

During her talk, Saunders described efforts and functions of specific PEO STRI offices in preparing military personnel for potential dangers on the battlefield.

“Not only does Threat Systems Management Office (TSMO) provide threats to the Army – specifically for tests – we’re now branching into the training domain.” Saunders said. “TMSO’s portfolio is growing because of the demand to ensure our soldiers are trained against a relevant threat. We’re lucky that the threat we build in the test community is exactly the threat in training.”

On changing acquisition culture, Saunders said that Congress granted authorities which allow the department to create the Adaptive Acquisition Framework. Six pathways exist within that framework, which allow acquisition professionals to decide how to develop capabilities.

“We’re very fortunate that STRI is a mostly software-intensive portfolio and there is a pathway, specifically for developing software,” Saunders said. “There’s another pathway we’re leveraging across several programs, both new ones like STE, but also programs that have been around for years. The middle-tier acquisition pathway for rapid prototyping and rapid fielding allows us to identify capabilities that could be fielded to soldiers within five years, which gives us some flexibility to continue this development and delivery to our soldiers.”

Saunders said that PEO STRI will be leveraging both of these pathways extensively. “From an Army perspective, we’ve taken to heart the authorities that Congress has given us in helping write the policies for the Adaptive Acquisition Framework,” Saunders said.