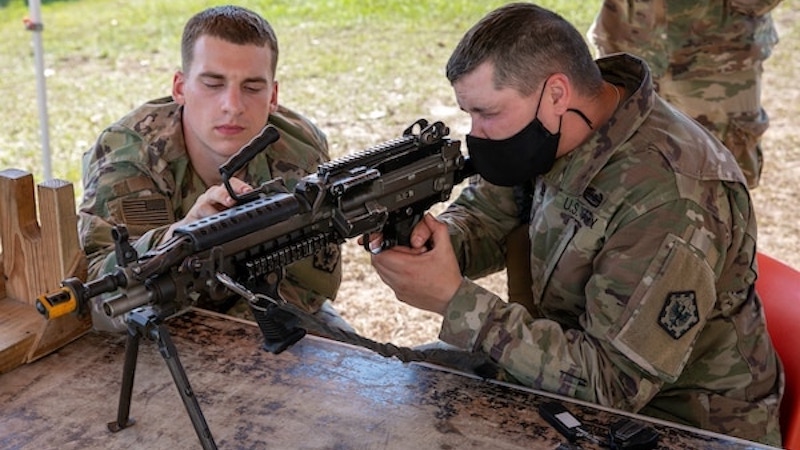 “Bang, bang! You’re dead,” the youngster playing a Soldier with a toy rifle would shout at his opposing force, usually his brother or a friend.

“No, I’m not, you missed me!” would be the “enemy’s” response. “Are too!” the argument would continue.

Fortunately, today’s real Soldiers training in the live domain of the Live, Virtual and Constructive -Integrating Architecture don’t have to spend time arguing with each other thanks to a system called the Multiple Integrated Laser Engagement System (MILES).

When originally fielded in the 1980s, the Soldier knew he had been shot by opposing forces when his MILES sensor made a beeping noise. A controller in the field training exercise would then tell the Soldier he was “dead” and no longer in that portion of the exercise. It was easy, however, for the Soldier to fudge a bit and reenter the mock battle by simply refreshing his MILES equipment. Additionally, the system did not capture any data, so commanders had no way of knowing who shot who. Those days are gone.

With the new MILES, when combined with the Homestation Instrumentation System (HITS), commanders and staff in the tactical operations center can track all the action, including Soldiers, vehicles and equipment, on the HITS exercise control (EXCON) stations, similar to EXCON stations at the maneuver combat training centers (MCTC).

“We have made tremendous strides in technology over the years to provide our Soldiers the most realistic live training possible,” said Col. Mike Flanagan, project manager for Training Devices. “With HITS combined with MILES, commanders can now track the activity of up to 2,000 live players and 8,000 constructive participants during live force-on-force and force-on-target exercises. Together, MILES and HITS are the vital facilitators for the live portion of LVC-IA.”

During mission rehearsal exercises, Soldiers, individual and crew-served weapons, and tactical vehicles are outfitted with MILES. The movement of each asset is then tracked through HITS, providing commanders a picture of all the activity on the battlefield.

“Commanders now have an exceptional tool that provides them an at-the-moment assessment of what is going on during the mission rehearsal exercise,” Flanagan said. “Best yet, HITS also provides a full after-action review within 20 minutes of completion of the exercise.”

He added that HITS can simultaneously monitor and record up to 16 tactical voice networks as well as use recorded live video feeds from field cameras.