Orange County Mayor Teresa Jacobs and her Modeling and Simulation Blue Ribbon Commission, consisting of a group of local business leaders, joined Team Orlando for a briefing and tour on Sept. 25. The purpose of the half-day visit was to familiarize the guests with the history of Team Orlando and provide some hands-on demos of Team Orlando modeling and simulation programs. 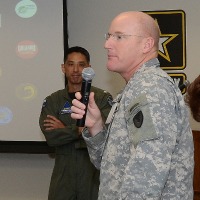 Capt. Steve Nakagawa “SNAK”, Commander, Naval Air Warfare Training Systems Division (NAWCTSD) welcomed the group and discussed the value of simulation and training. “Training is key in ensuring military preparedness and adapting to new and changing roles and missions as our force levels decline,” said Nakagawa. “These changes will require innovative approaches to how our military trains.”

Following Capt. Nakagawa’s history of Team Orlando, other board members discussed their missions touching on important aspects that are vital to the success of warfighter training in support of our nation’s readiness mission: Government Partnerships, M&S Industry Relationships, Academic Partners and Community Outreach.

Key messages for the group included information about the relationships and collaboration that results in over $4.5 billion in annual business and a robust supporting industry of over 130 companies located in and around the Research Park

Following the briefings, the visitors were divided into two groups for demos and tours. Guests were given the opportunity to get an up close look at the realistic military training simulations that carry over in the areas of medicine, gaming, education and virtual worlds.

The tour at STTC began in the memorial garden as the Army shared the poignant story of Medal of Honor recipient SFC Paul Ray Smith’s sacrifice and service to the Nation. Inside the labs, visitors saw the Medical 3D Holograms, the Dismounted Soldier Training ELITE, Upper Airway Training and SAPS (Stand Alone Patient simulator), aka I-STAN.

Over at NAWCTSD, the Surface Navigation Lab engineers showed the touch-screen technology for the Multi-Purpose Reconfigurable Training System / Weapons Launch and the Console Team Trainer (WLCTT) which is also available in 3D. Also in the NAWCTSD building, the tour included Avatar Based Interview System (FLETC), Imaginarium (ADL) and the PEO STRI program VBS2.

After the tours, the guests adjourned to Partnership III for a working lunch, led by Waymon Armstrong, President, Engineering & Computer Simulations, who is chair of the Blue Ribbon Commission. “We hope that today’s visit showed each of you that Team Orlando is the leader in addressing the primary variable in military readiness: Training,” Armstrong said. “Modeling and Simulation is a fundamental and critical component of developing training solutions. They say a picture is worth a thousand words likewise, simulation is worth a thousand pictures.”

Team Orlando will continue to serve as the Modeling, Simulation & Training global resource. They will resume playing a vital role in responding to evolving training and simulation needs which will ultimately result in transferring its products to non-military applications through cooperative agreements.