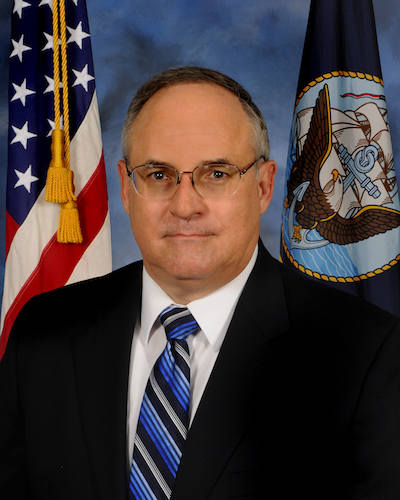 Listening to Michael Merritt talk about his experiences, it seems his new assignment as deputy technical director for Naval Air Center Warfare Training Systems Division is the perfect fit for him. His life roadmap, so far, has taken some twists and turns, but he feels his “very non-traditional career” has helped prepare him for this task.

Merritt was born in Dade City, Florida, and grew up not far from there in Pine Hills. He stayed in the area and earned his undergraduate engineering degree from University of Central Florida.

With a job offer already in his pocket, he was approached by the Air Force with another job offer. They couldn’t match the salary of his standing offer, but what they did offer him was a path to earn his master’s degree from the Air Force Institute of Technology at Wright-Patterson Air Force Base, with benefits and at no cost to him. His part of the deal? A four-year commitment to the Air Force. He was commissioned as a second lieutenant, and after earning his master’s in electrical engineering, he completed a 90-day officer training and began his 20-year Air Force career.

“I learned a very wide range of skills, so when I came into this office, where we manage a lot of very diverse projects, I felt prepared to weigh in on any of our projects,” Merritt said. “I’ve been involved at different levels of command assignments, and on different levels of technology maturity; everything from basic research to working on fielded systems.”

But what is very fitting for Merritt and his role at NAWCTSD, and serving as the organization’s day-to-day principal on the Team Orlando Board of Directors, is the experience he gained working on joint programs, which totaled about 15 years of his 20 years of service.

One of his most memorable assignments began in July 2001. Merritt became the MV-22 development IPT lead, responsible for acquisition management of the “Way Forward” development program to return the Marine Corps and Air Force tilt rotors to safe and operational use, following a decade that saw three Osprey crashes.

“This opportunity was one of the most fulfilling for me because the Osprey was a very important platform for the Marines and Special Ops community, and it was very kind of Pax River to give me a leadership position as an Air Force guy in a Marine program,” Merritt said. “After six years, as an IPT, we were able to get the plane to full production, and it’s still performing well.”

During his time leading the IPT, Major Merritt retired in 2002, but was hired by the Department of the Navy as a civilian, and remained the MV-22 development IPT lead.

“All my previous assignments really helped to prepare me for that moment — whether working in tests or working in the Pentagon,” Merritt explained. “Now I was sitting at Pax River as the IPT lead and I had experience with Special Ops, the Air Force, and the Navy, and I had worked operational tasks, so I could work those issues. My entire career prepared me for that one assignment.

“It was a very challenging time, but rewarding. Many of the people that were at Pax are still there, and I made a lot of many long-term friends from my time there,” he said.

Today Merritt’s top priority is ensuring his team is supporting the fleet, and he feels in order to effectively do that, there are two things that his team needs to do: execute their programs well, and have good working relationships with their industry partners.

“It’s important to me to make those dots always connect because if you fracture your execution or industry relationships, you’re not going to deliver good products,” Merritt said. “It’s all about executing and getting what’s needed to the fleet.”

Merritt said that Team Orlando is an enabler, and that a lot of the work Team Orlando does in programming, diversity, strengthening industry relationships, or improving communications may seem transparent, but is highly relevant.

“The beauty of Team Orlando is that it gives us an organized structure and team to accomplish our goals, and it’s a lot less manpower-intensive to figure them out,” he said. “That way every time is not the first time.”

And for Merritt, transparency and trust are key indicators of success. “It’s all about transparency and trust so that we can mutually meet our objectives,” he said. “But we’ve got to be able to have those conversations so we can come up with a mutually-agreeable plan. Industry has to trust that we’re not going to overreact, and that we are going to work with them to resolve the issues. They are trying to run a business and we’re trying to deliver to the fleet, but with trust and transparency, those are not mutually exclusive.”