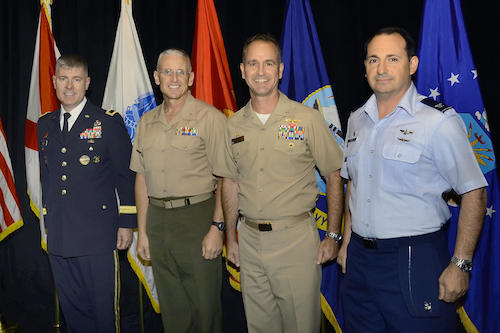 The leaders of each of the Orlando-based military modeling and simulation commands formally reaffirmed their commitment to working together by signing an updated Team Orlando charter during the annual Training and Simulation Industry Symposium (TSIS) on June 14.

The senior officers from each of the four military services represented within the Central Florida Research Park serve as the Team Orlando Executive Board of Directors. They work together as a collaborative interservice military body with a primary mission of supporting the Department of Defense (DoD).

The signing ceremony — the first ever conducted publicly at TSIS — was facilitated by Diana Teel, Team Orlando Secretary, who described the purpose of the group. “Team Orlando is a coalition of the willing. It’s all four services co-located in Research Park. It also includes industry, academia, our community and other federal organizations. Every two years, our service executives get together and sign this charter,” she said. “This year we are going to do this publicly with you. It’s a renewal of our coalition of the willing.”

During the brief signing ceremony, each of the leaders explained the importance of working collaboratively and emphasized their support of the team.

“I’m honored to have the opportunity to represent the Army in the re-signing of this Team Orlando charter,” said U.S. Army Brigadier Gen. William Cole, Program Executive Officer for Simulation, Training and Instrumentation (PEO STRI). “(The charter) signifies the steadfast resolve that we have collectively to collaborate and develop the cutting-edge training and simulation systems to support our warfighters, the men and women in uniform.”

Cole explained that the Army and Navy partnership in developing training systems is one of the longest-lasting in DoD. “The Army and Navy originally signed this charter back in March of 1950. So for 67 years now we have been going strong and grown to bring the other services on board. As far as we know this is the longest-standing interservice agreement within DoD,” he said. “I’m really happy to see how much Team Orlando has grown beyond just the Army and the Navy, beyond DoD, but also now includes our industry and academic partners that we have here in the greater Orlando area. As I sign this, the Army is looking forward and committed to continued collaboration in support of the men and women in uniform.”

Naval Air Warfare Center Training Systems Division Commanding Officer, Capt. Erik Etz, highlighted the partnership as the reason each of the services are successful. “Naval Support Activity Orlando is the smallest base in Navy Region Southeast and we are seen as a base with one of the biggest impacts across the fleet, and that is because of Team Orlando,” he said. “With the teaming arrangements we have across the services, I can attest that we have commitments across all of our organizations to work together where it makes sense and the charter is the embodiment of that.”

The Marine Corps’ Program Manager for Training Systems, Col. Walter Yates, said the Marines joined Team Orlando to “be closest to the technology that facilitates the best training and preparation for our Marines to deploy and win.” He explained, “The Marine Corps benefits tremendously from the sharing of information, technology and resources in terms of expertise from the other services that we share. This is one of the best returns on investment that the Marine Corps has.”

The final signature on the charter was by Col. Robert Epstein, commander of the Air Force Agency for Modeling and Simulation (AFAMS). “The ability to actually share and leverage information is fantastic. I’m honored that I’m able to be here today to sign off on this charter,” he said.

The Team Orlando Charter will remain in effect indefinitely, but will be reviewed and updated every two years.