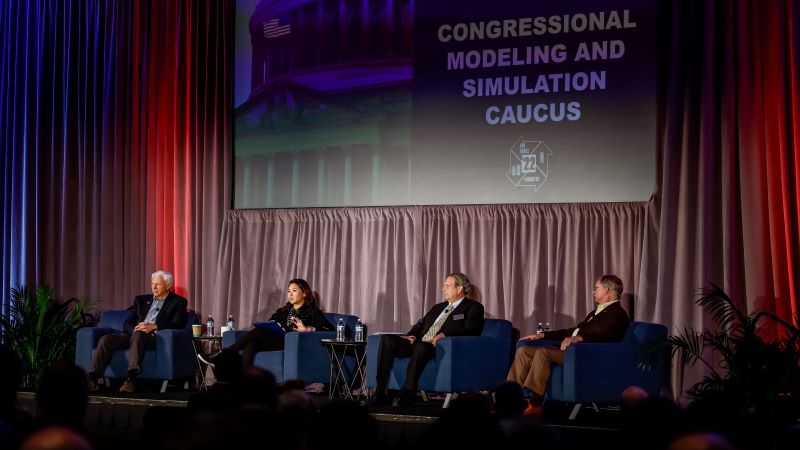 Congress members in the Modeling and Simulation Caucus met during the first day of the Interservice/Industry Training, Simulation and Education Conference to discuss current events and the modeling, simulation and training (MS&T) community.

In her introductory comments, Murphy recognized China as the leading threat to U.S. interests, in accordance with the National Security Strategy and the National Defense Strategy. Murphy said the threat of Chinese competition to U.S. security and interests was an area of bipartisan agreement in Congress and “will be the pacing threat from a national security perspective moving forward.” According to Murphy, the current administration has continued the previous administration’s policy of using aggressive export controls and industrial policy to “‘play keep away’ and run faster,” which affected the modeling, simulation and training (MS&T) industry.

“The keep away piece is the export controls, [for example,] you cannot sell chip technology or equipment that makes chip technology to certain Chinese companies,” Murphy said. “We don’t want them to be even relatively competitive with us in these high-tech areas.”

Murphy said an example of the “run faster”/industrial policy aspect was investment in the MS&T community, and it was reflected most recently in the $52 billion that was passed through the Chips Act, much of which was directed toward growing American capability in high-tech areas.

Rutherford, who has over 40 years of law enforcement experience, commented on the MS&T industry’s innovation that has improved law enforcement training over the years. He said that American domestic security rests with state and local law enforcement officers, and the MS&T community is equally important to that focus as it is to national security.

“Some of you might remember the old Firearms Training System, and when I look at what the MS&T industry is producing today compared to what we had back then, it truly is amazing,” Rutherford said. “You are adding to the knowledge, skills and abilities of all of our law enforcement personnel across the country. You make them better and safer at what they do, and you help communities, particularly from a budget standpoint… and those of us [on this panel] need to make sure, through the appropriations process, that we’re doing all we can for you.”

Bergman said the Information Age has made it possible to make bigger mistakes quickly due to the speed at which information flows. Calling on his experience as a former Marine aviator, Bergman cited plane crashes as an example of crucial government and industry collaboration. Such incidents cause investigations that require government and industry to meet and work as a team to ensure that factors leading to a particular accident never happen again.

“It’s the private sector that drives innovation, but it’s a good governmental body that creates the playing field where innovation can flourish,” Bergman said. “All of us on this stage want to ensure that we’re part of solutions, not part of the problems for you in the private sector as you innovate.”

As the session closed, Soto summarized the panel’s thoughts on the MS&T community’s role in national security.

“Support for modeling and simulation is bipartisan,” Soto said. “We appreciate what you do to defend the homeland, prepare the warfighter, and make sure we’re ready for whatever comes, domestically and abroad.”