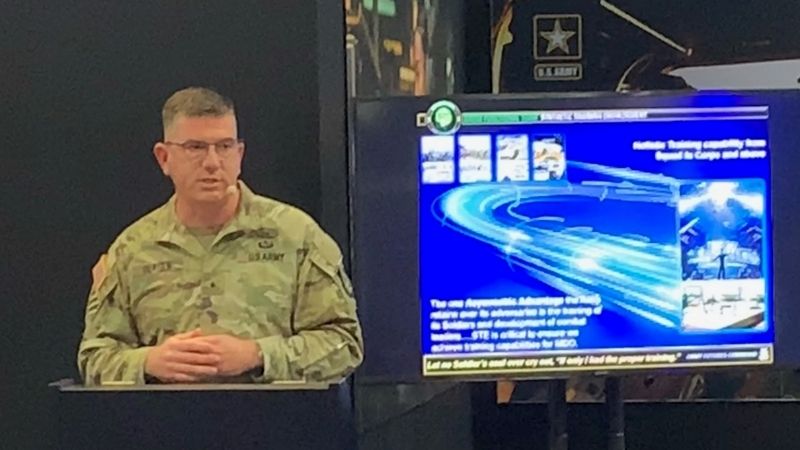 Brig. Gen. William R. Glaser, the director of the Synthetic Training Environment (STE) Cross Functional Team, spoke about modernizing the American Soldier through training during a Warriors Corner presentation on Oct. 12 at the annual Association of the United States Army’s conference in Washington, D.C.

“The U.S. Army is at an inflection point and in a state of persistent modernization,” said Glaser. “Here at the STE, we’re not updating weapons systems, we’re attempting to update and improve Soldier performance on the battlefield through training.”

As one of the eight Cross Functional Teams assigned to the Army Futures Command, the Synthetic Training Environment is furthering the development of several signature modernization efforts to propel the Army’s collective training environment into the future.

“For the last 20 years, our competitors have been watching everything we’ve been doing on the battlefield, and they’ve been changing as well,” he said. “The legacy training systems that we’ve had in the past have been excellent at providing top-end training events.”

He stated that they weren’t easy to use and that more efficient training technologies will allow for more “sets and reps” in the crawl and walk phases so that Soldiers come in at a much higher state of readiness as they enter the live training environment.

“We have great leaders in the United States Army, but they don’t have an ample amount of time,” Glaser said. “So, the STE’s idea of being easy to use is going to be able to leverage some of these big data sets.”

The STE has to be able to use artificial learning, machine learning, and artificial intelligence so it can all facilitate an after action review once training is complete.

Glaser says delivering training at the point-of-need is crucial. This is happening with the Reconfigurable Virtual Collective Trainer (RVCT), using embedded and/or appended training capabilities, allowing tank crews to train in a synthetic or virtual environment in their assigned combat vehicles.

“My vision of point-of-need training is when a leader shows up to the motor pool, conducts command maintenance in the morning, grabs lunch, and returns to the motor pool, gets in their vehicle, puts on their AR goggles, flips a switch in their vehicle from operational to training, and is instantly immersed into a synthetic environment where they can train precision gunner skills or collective training with their platoon or company,” Glaser said.

None of this is going to happen immediately, Glaser cautioned. It will take time, money, and technology.