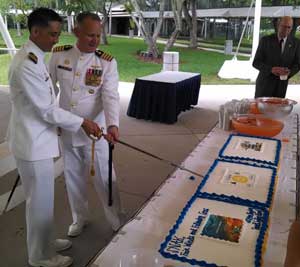 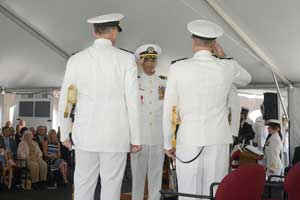 NAVAIR Commander, Vice Adm. David A. Dunaway, was the keynote speaker during the ceremony. During his remarks, Dunaway discussed the importance of NAWCTSD, NSA Orlando and shared his thoughts on the incoming and outgoing commanding officers, “There is a lot of hard work which get you the privileges that we have today. Our military keeps the peace in the world and these moral, empathetic and passionate leaders make our Navy so great.”

Dunaway delivered a motivating message to those attending the ceremony. “NAWCTSD is one of the places that thinks differently. Orlando is nice and has innovative thoughts; now is the time to take those innovative ideas and technology forward. Snak (Capt. Nakagawa) has been the king on the innovation throne in Orlando and I know Wes is prepared to move NAWCTSD forward because we pick great folks to lead this community.” 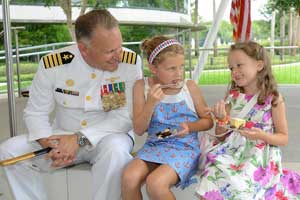 Commander, Naval Air Warfare Center Aircraft Division Rear Adm. Mark W. Darrah also shared his thoughts about NAWCTSD’s command team. “There was no one more suited to dealing with the challenges of budgets, sequestration or a government shutdown than Snak and Wes. It’s good for the warfighters to know that we have two commanders like this leading the organization’s future.”

Nakagawa was presented with a Legion of Merit Award for his leadership of NAWCTSD and NSA Orlando. Along with the change of command ceremony was also a retirement ceremony for the outgoing commanding officer who served the Navy honorably for more than 28 years. “I believe in the diversity of thought. I believe in the partnerships of Team Orlando. When you work together as a team you get more effort out of everyone,” said Nakagawa.

Following Navy tradition and protocol, Nakagawa read his retirement orders, and then Naylor read his orders to report as commanding officer of NAWCTSD and NSA Orlando. Shortly after 11 a.m., Naylor saluted Nakagawa and with the words “I relieve you sir,” assumed command. 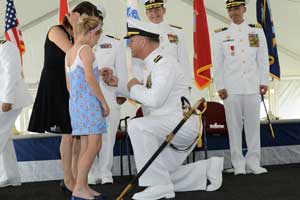 Naylor’s first line of business as commanding officer was to show his appreciation for Nakagawa’s leadership and career in the Navy. “There is no other naval officer who served during difficult times had the dedication of Snak.” We have two exciting years ahead of us and I’m very honored to serve. “Today is not about me — it’s a celebration of the people of NAWCTSD and NSA Orlando,” he said during his first remarks as commanding officer. “It’s my long standing belief that the most important part of any organization is the people who comprise it. One of my highest priorities will be serving you. I expect that we will work together with the highest levels of integrity and a commitment to innovation as we strive to maintain the highest levels of training systems excellence.”

While not included as part of the ceremony, the duties of executive officer were assumed by Capt. Erik “Rock” Etz who recently reported to the command from his duties as senior military lead for the F-35 integrated test force Patuxent River, Md.