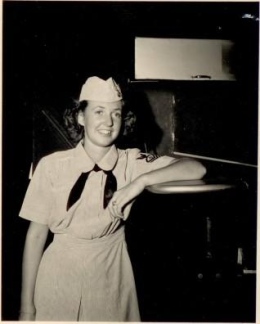 The National Center for Simulation recently inducted the first Hall of Fame class for its contributions to the field of modeling and simulation, and half of them have strong ties to UCF.

Priscilla Getchell, pictured in her Navy WAVE uniform, was recently inducted into the National Center for Simulation Hall of Fame.

“For too long, the modeling and simulation community in Florida has been unnoticed. Now, we have a Hall of Fame to point to with a significant number of its members coming from UCF,” said Henry Okraski, co-founder of the National Center for Simulation.

Okraski also said that while the first class was truly the “cream of the crop,” there are many more explorers and pioneers in the modeling and simulation field who could be recognized in future ceremonies.

Frey, founder of UCF’s Lou Frey Institute of Politics and Government, was one of five UCF inductees. He was also one of the founders of the National Institute for Simulation.

“It just shows you that being in the right place at the right time is just the first step, but you also have to take advantage of it. It’s not enough to be there, but you’ve got to do something,” Frey said.

Frey was recognized as an advocate for modeling and simulation, the space program and the creation of the nation’s Center of Excellence for Modeling and Simulation in Central Florida.

Research conducted at UCF’s Institute for Simulation and Training “focuses on advancing human-centered modeling and simulation technology,” according to its website. Some of the research has assisted in the training of educators, medical professionals and military forces.

Sam Drucker is a junior mechanical engineering major and president of the UCF Robotics Club. His club mainly focuses on autonomous robots. These types of robots are utilized in space exploration and for bomb removal and diffusion.

Drucker said he was proud to know that not all Hall of Fames consist of point guards and quarterbacks but engineers and scientists as well.

“Our club is interest-based and made up of students who want to go above and beyond, so the more people hear and learn about simulation, the more students might find that this is something that interests them,” Drucker said. “It’s great to see that people are going to be recognized for their work in this field.”

IST opened in 1986 and under Hitt’s leadership, three partnership buildings were constructed in the Central Florida Research Park, located adjacent to the university’s main campus, which has since been a hub of discovery.

“Together, our efforts at the Central Florida Research Park highlight a model alliance that is not replicated anywhere else,” Hitt said in a press release. “We are a vital force for expanding the economic prosperity of Central Florida and of our great state, and we help prepare America’s warriors for their challenges in protecting the freedoms of us all.”

Other honorees included: Rear Adm. Luis de Florez, who created and implemented synthetic training with the Navy during World War II; Richard C. Dehmel, a scientist who invented the first flight simulator; Retired Gen. Paul Francis Gorman, who revolutionized Army training and the effective use of simulators; Retired Gen. John P. Jumper, the 17th chief of staff for the Air Force who championed the effort to ensure real-life preparedness for aircrews and ground forces; and Edwin Albert Link, the “father” of simulation technology and the inventor of the Link Trainer flight simulator.

Original article written by Jessica Ortega and reprinted with permission from the Central Florida Future.