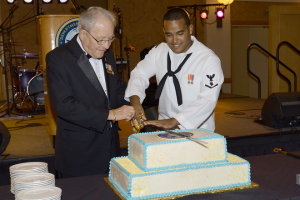 The oldest and youngest sailors perform the honor of cutting the cake.

This year’s guest speaker was Donald Quinn, Rear Admiral, United States Navy and Commander, Naval Education and Training Command. Admiral Quinn spoke of the moving history of the Navy, his experience as a young sailor and the current state of our nation. “From everyday adventures to remarkable heroic outcomes, the accomplishments and achievements of America’s Navy are immeasurable,” Admiral Quinn stated.

“For centuries our men and women in uniform have defended the freedom we all enjoy. Today they do so at great sacrifice. In honoring those who serve we salute this effort, the toll it has taken, and the courage, determination and spirit that is evident in those who carry the load. The future we hold dear rests on the valiant shoulders of us all — the American Soldier, Sailor, Marine and Airman.”

The evening concluded with the ceremonial birthday cake-cutting of a breathtaking cake donated by Laurent Branlord, Executive Pastry Chef from Walt Disney World Swan & Dolphin Hotel. Historically, the cake-cutting signifies a renewal of the Sailors’ commitment to the Navy and the Navy’s commitment to our nation. The use of a sword to cut the cake is a reminder of the bond the sailors share, and the commitment they make to carry arms so that our nation may live in peace. As is the Navy custom, the first piece of cake was presented to the guest of honor, Admiral Quinn. The second piece was presented to the oldest Sailor present and the third to the youngest Sailor present. This year’s honorees were more than six generations apart.

Added touches to this year’s Navy ball were the Parading of the Colors by Centurion Batallion Sea Cadets and live music for ambience and dancing.