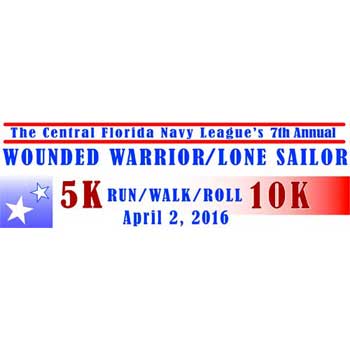 In 2014, CFNL also began supporting the Camaraderie Foundation, whose mission is to provide healing for invisible wounds of war through counseling, emotional and spiritual support for all branches of military services members, veterans, as well as their families.

This year’s Wounded Warrior/Lone Sailor 5K & 10K is on April 2 at Blue Jacket Park, and there’s still time to participate in this event. Interested individuals are able to register online at www.cfnl5k.org, or can also sign up the morning of the race beginning at 6 am. For those registering in advance, you will be notified of an assigned early packet pickup date/time if you do not want to pick up your packet the morning of the race. There is also a discount for groups of ten or more.

The event welcomes both adults and youth, and will take place at Blue Jacket Park, 2501 General Rees Avenue, Orlando, Florida 32814.

Immediately following the run awards will be the official dedication of the Lone Sailor Navy Memorial.

“This is going to be a very exciting day for all of us,” said Central Florida Navy League (CFNL) President Bill “Roto” Reuter. “There are many people who have been working hard to make this dream become a reality. The Lone Sailor monument will serve as a reminder of the legacy of the Navy’s presence in Central Florida, and will be an inspiration to those who are currently serving or will serve in the United States Navy.”

The bronze Lone Sailor that will be placed at the memorial represents the core values of honor, courage, and commitment — all of which are tenets of the U.S. Armed Forces. The statue also commemorates and demonstrates gratitude to those who served at the Naval Training Center (NTC) of Orlando for over three decades.

“More than 652,000 men and women completed their Navy Basic Training at NTC Orlando, which was the country’s first co-ed Boot Camp,” said Chris “Towny” Townsend, CFNL vice president. “It’s one way we can say thank you to all those who served.”