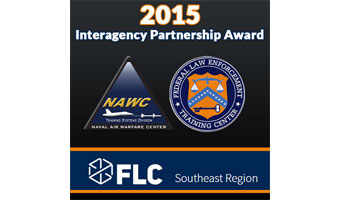 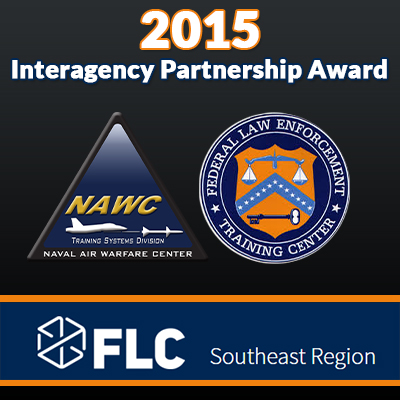 Tyson Griffin, head of NAWCTSD’s Advanced Modeling and Simulation Branch, said the partnership with the FLETC has been an important one to both groups. It has allowed for the continuous evolution of technology that benefits from a very wide breadth of domains and perspectives. This results in a more cost affordable and complete training capability for all.

Dating back to October 2009, immersive, scenario-based training technologies developed by NAWCTSD for use in the Department of Defense (DoD) were applied to the law enforcement domain within the FLETC’s Performance Assessment Laboratory (PAL). This is a state-of-the-art facility created to research and evaluate immersive, scenario-based training and human performance. However, a need existed for the incorporation of flexible and cost-affordable scenario and special effects control, as well as After Action Review (AAR) technologies. NAWCTSD engineers customized its SPECS and AAR technology, working closely with FLETC researchers and subject matter experts to better support law enforcement training and the mission of the PAL.

Many of the modifications focused on the creation of highly intricate and intimate environments for challenging a person’s situational awareness and escalation of force decision making. While customized for specific law enforcement requirements, the modifications also turned out to be very applicable to DoD training for the Global War on Terrorism, and helping personnel to better prepare for the complexities and ambiguity of non-combatant intensive environments.

“Law enforcement often does that best because that’s the world they live in,” Griffin said. “Most of the additions we worked on with the FLETC were able to be immediately repurposed and utilized in training capabilities we were also providing to the fleet at the time.”

Fast forward to current day, the most recent collaboration between the two groups has resulted in feature enhancements and installation of a custom set of SPECS and AAR technologies within a number of the Danis City buildings at the FLETC’s Counter Terrorism Operations Training Facility. Danis City is an expansive area that provides a realistic urban and suburban environment, and is utilized for various levels of training, including stress exposure training for federal, state and local law enforcement.

William A. Norris, Ph.D., chief of the Applied Research Branch, FLETC, said that SPECS is designed around the perspective of tying specific cues to cognitive tasks that instructors want trainees to make. Instructors can develop a scenario that causes people to make decisions for some of those cues they receive — be it smell, sound, or visual — all the various types of sensory perceptions in humans.

“Both groups have piggybacked on each other,” Norris said. “With this improved and added technology, several camera placements enable a comprehensive recording of the training, giving an instructor the ability to review camera feeds from different areas. It’s stored as part of an integrated network and is accessible to instructors at any time to use for feedback for trainees.”

Norris said that one of the things they learned in the PAL is that when reviewing with students involved in these high stress, immersive trainings, they often have an inconsistent recollection of the training scenario than that of their instructors.

“When we are discussing a student’s training outcomes with them, we often find they have a totally different vision of what really happened. Once we play the video, using the cameras from multiple perspectives, the students’ mouths are wide open as they realize what they thought they did isn’t at all what they actually did.”

Griffin said that an important aspect of the technologies is their usability. The ability of technology to affect change in a student is predicated on the instructor’s utilization of the tools that support their expertise as an instructor. He added, “Even with very little training on SPECS, an instructor who understands the training environment can sit down at the SPECS client, and using a mouse or keyboard, quickly create a scenario and save it. Once they have programmed their scenario into the system and saved it, they can play it repetitively across many students, or make dynamic, real-time changes during training.”

As a government-owned technology, each time customers approach NAWCTSD about SPECS — whether that’s within the Navy, other Services, or other government agencies like the FLETC — whatever iterations take place in that next development, they can benefit all future customers who come to present their SPECS requirements to NAWCTSD. Not only are the continued collaborations saving money and time, they are helping to prepare and protect our nation’s military service members and law enforcement.

“Realistic preparation for our trainees translates into better performance on the streets or on the battlefield,” Norris said. “If they have developed some familiarity of their environment — what it should sound like or smell like — it’s less overwhelming when they get there.”