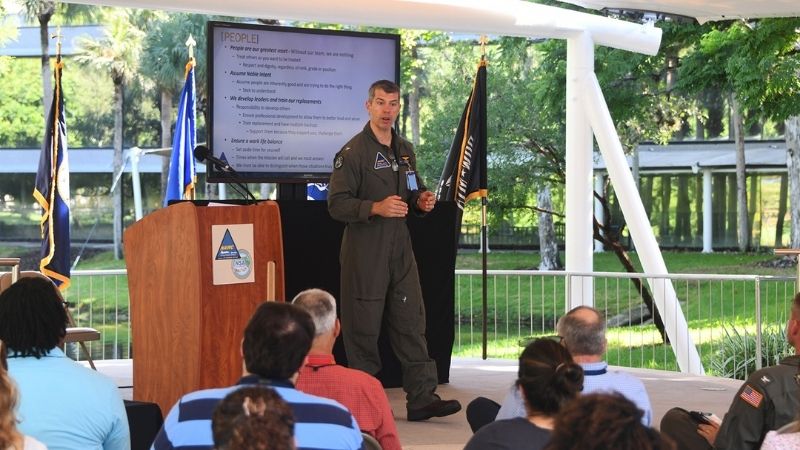 NAWCTSD’s new commanding officer (CO) is originally from the Bronx, New York, spending all of his pre-adult life within a three-block radius, an area called Pelham Bay, which he equated to a neighborhood life one might see on Welcome Back, Kotter. Covelli’s large family spent a lot of time together, and at times lived together in houses that supported three families, one on each floor. Although he is an only child, he had plenty of aunts, uncles, and cousins around as companions.

“I had a lot of cousins, but as you get to know me, you can tell I’m an only child,” he joked. “My wife reminds me of that all the time.”

Early on, Covelli’s mom was very dedicated to ensuring he had the best education. She and his father enrolled him at either private or parochial schools throughout high school. But just like other kids in the neighborhood, he loved playing sports in the streets. “You name it — basketball, hockey, football — we figured out a way to play it there,” he remembers. But, although his mom continued to place a big emphasis on his education, he believes it was a parent-teacher conference in eighth grade that may have lit a fire under him.

“My parents worked, so my conference took place later in the evening,” Covelli said. “I was always the last one. One of my teachers, Sister Ann Walsh, basically told me that night that if I didn’t get my act together immediately, I wasn’t going to amount to anything, not to mention getting into one of the Catholic High Schools or graduating.”

He did what he was told, receiving the most improved student award, and followed that up by doing well in high school. “I might have woken up later, but it was probably because of what she said that night.” But he gives most of the credit to his mom. “Let me put it this way: my mom emphasized my education. If she hadn’t, I don’t know that I would be here today.” And where Covelli is today, is in Orlando, the nation’s epicenter for modeling, simulation and training, serving as the CO for NAWCTSD, one of the lead military commands for Team Orlando.

The dedication to his education never slowed down after high school. A 1994 graduate of State University of New York (SUNY) Maritime College with a Bachelor of Engineering, throughout his Navy career, Covelli has also earned his Master of Science in Aviation Systems from the University of Tennessee, and his Executive Master of Business Administration from the United States Naval Postgraduate School. It seems clear that Sister Ann Walsh knew what he was capable of back in eighth grade, which is why she laid it on thick.

But surprisingly, Covelli’s decision to join the Navy wasn’t because his dad and an uncle were in the Army, or that three other uncles were in the Navy. It was just a way for him to do what he thought he wanted to do, which was fly planes.

“One day we were going somewhere, and I was watching from the highway as planes were taking off and landing,” he said. “I thought that would be pretty cool. One of my cousins married someone in the Air Force ROTC and he guided me along the way as I tried to get into one of the academies.” He didn’t get accepted into any of the academies, but Covelli was offered a three-year Navy ROTC scholarship which took him to nearby SUNY Maritime College. His plan was to work hard and transfer to a school with a “bigger name.” But after a successful year, one of his instructors convinced him to stay, sharing that SUNY had a high acceptance rate for aviation and an accredited engineering program.

Looking over Covelli’s bio, he’s accomplished a lot. For him, “It’s all been great. My first squadron was really great. You’re flying an airplane; you have a ground job. It’s not too hard, but you think it is until you look back.”

That job was at Whidbey Island, flying prowlers as a junior officer, when Covelli was chosen to be the first night goggles instructor (NVGI) for the entire community. He went to other squadrons to instruct, including the fleet replacement squadron (FRS), which is where the new pilot training takes place. He also got to help other squadrons stand up their NVG program. He made a lot of connections and got to know many people because he was always flying with other squadrons.

Covelli also served as a landing signal officer (LSO). Cue the picture of a sailor on a deck waving paddles to coax in an airplane. “They don’t use the paddles anymore,” he explained. “They use a handheld headset and a pickle switch now.” He said he enjoyed being an LSO and it was fun because he could meet everybody in the air wing. “And you got to be outside on the flight deck instead of standing duty. But it could be bad sometimes with a sunburn or if it was raining,” he warned.

While he was at the Tactical Electrical Warfare Squadron 129, he was selected to attend the prestigious U.S. Navy Test Pilot School with Class 123. Following graduation, he reported to the “Salty Dogs” of Air Test and Evaluation Squadron 23 to serve as a Test Project Officer, and later the Deputy EA-6B Platform Coordinator.

“It was cool to do test work and fly things that had never been flown before, using equipment that had not been used before,” he said. And when it didn’t work how it was supposed to? “That was actually pretty fun because we got to do more flights.”

Ironically, one of the systems/products he tested that was categorized as “not suitable for use” was, in fact, suitable for something else later on — a thesis. Covelli authored The Evaluation of the Low Probability of Intercept Altimeter (LPIA) and its Impact on EA6-B Operations when earning his master’s degree in aviation systems.

Covelli moved to Naval Air Station Patuxent River in 2008 to Program Executive Office, Tactical Aircraft Programs, his introduction to acquisition, and the reason that he is here at Team Orlando. There he worked on some “great systems” including the A6-B Weapons System; the training aircraft, E/A-18 Next Generation Jammer; and the F-18 Electronic Warfare Suite. Just before he left, he also worked on the MQ-25 Unmanned Aircraft System, now the Stingray, and in the middle of source selection he was selected to come to NAWCTSD as the executive officer.

But before he could assume that position, he was instead tapped to lead Ready Relevant Learning: Sailor 2025. “There was no one here to stand it up. They wanted an O6, a captain, that had program management experience,” Covelli remembered. “I got to meet some great people and I got to see some things here at NAWCTSD that will really help me as the CO. Overall it was a very positive experience and helped me see things through a different lens.”

Now as the CO, Covelli is ready to focus on goals that keep NAWCTSD moving forward. “I think NAWCTSD could possibly be one of the best commands in the Navy, and I want to make sure we continue on that path,” he said. “My focus is people, family and mission; in that order, on purpose.”

He said the mission won’t always be third because it can’t be, but that it’s important not to burn people out. “I want to make sure we educate them, mentor them, train them and train their replacements for backups,” Covelli explained. “We have to continue to treat people with respect and help our teammates. And we have to take time to be with family. Family is a precious bond, and you have to nurture that relationship and be there for life’s moments.”

But there is the mission and sometimes the work to support the mission takes priority. And NAWCTSD’s mission is to expeditiously deliver quality training products to the fleet. While meeting the mission, he wants to foster a culture of innovation and empowerment. “I want people to feel empowered in their jobs and have the resources they need,” Covelli said. “I want to remove any barriers they feel they have and know I am there to back them up. I want them to be innovative and not accept the status quo.”

Covelli said he is also focused on continuing outreach. “We have great relationships with industry, academia, and local leaders and I want to continue that. We have the Tech Grove up and running, but it’s still in its infancy and my job is to make it a self-sufficient organization.”

When it comes to the MS&T industry and academia, Covelli feels that NAWCTSD is on a great course with their outreach and collaboration. “Our number one mission is always going to be making sure our fleet has the training devices they need and that they are ready to fight,” he said. “We’re going to do as much outreach as we can. I want to make sure we pool our resources, our people, to make a force multiplier.”

Everyone has limited resources. “But if we work together, have common goals and if we’re aligned, we can ensure success if we focus together,” he said.

“I’m grateful to be here and I’m humbled for the opportunity to be a part of Team Orlando and this ecosystem,” he said. “This command is unique. We actually allow sailors to hone their skills and operate their weapon systems at the edge of the envelope. It allows them to keep the peace and if necessary, win in combat. Everyone here has a direct and positive impact on the fleet, and I think it’s a very special place.”