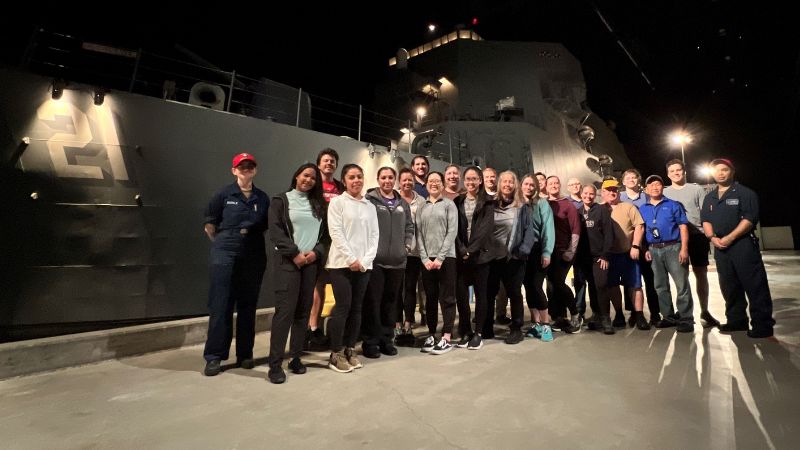 Teammates from Naval Air Warfare Center Training Systems Division, NAWCTSD, made the trip to Naval Station Great Lakes to meet the fleet and tour several NAWCTSD-supported trainers. Naval Stations Great Lakes has been turning recruits into Sailors for over a century and is home to Battle Stations 21, NAWCTSD’s most widely recognized trainer that almost every enlisted Sailor to enter the Navy since 2000 has experienced. Battle Stations 21 is 12-hour event that serves as a recruit’s final evaluation. Upon successful completion, recruits are awarded a Navy ball cap to replace the recruit ball cap they received on their first day of training.

Battle Stations 21 event is timed to ensure recruits are sleep deprived, which is the first of many challenges they will face in the simulator. This challenge is something NAWCTSD teammates had in common with the recruits. After a full day of travel, they were given a rare opportunity to put their sleep-deprived bodies and minds to the test and experience the four main evolutions recruits go through during the event.

“It gave me a real perspective on the size of the trainers.”

Computer Scientist Kevin Nguyen who is also the co-lead of NAWCTSD’s Asian Americans and Pacific Islanders Diversity Action Team, was nominated by his supervisor to attend. When asked why he was excited to visit Naval Station Great Lakes, he said he “wanted to learn more about Battle Stations 21,” and the most exciting part of the trip was “being able to go through the trainer and experience Battle Stations 21 as the recruits experience it” albeit with a lot less pressure. Upon completion of Battle Stations, 21 teammates attended the capping ceremony.

In addition to visiting other NAWCTSD-supported trainers at Great Lakes, teammates had the opportunity to interact with recruits during two separate mealtimes. For Human Resource Specialist Leslie Tapia, the pizza party brought to light the importance of her contribution. Leslie asked those around her why they chose to join the Navy and was surprised by the openness of one 25-year-old Sailor who explained her reason for joining was to be able to support her mother through her cancer treatments financially. Tapia said, “Listening to her story put tears in my eyes. These trainers will help to ensure she comes home safely to her mom. Knowing I’ve contributed in the smallest way to making that happen has given me a new appreciation for the importance of my work.”

NAWCTSD’s mission is to be the principal Navy center for research, development, test and evaluation, acquisition, and product support of training systems, to provide inter-service coordination and training systems support for the Army, Marine Corps, and Air Force. Cost and Scheduling Analyst Mary Truesdell supported seven different trainers but never saw one up close before this trip. When she saw Battle Stations 21 for the first time, she said, “it gave me a real perspective on the size of the trainers. Seeing the trainers in person is vastly different than looking at a word document of requirements. This trip has given me a great perspective on my role in providing products to the fleet.”

“It’s a humbling experience to know I impacted them on their journey to serve our country.”

NAWCTSD In Service Engineer Bob Kue, who has worked on the project since 2000, supports Battle Stations 21 on site. Kue, whose civilian service at NAWCTSD began over 30 years ago, was present for the groundbreaking of Battle Stations 21. When asked what the most rewarding experience of being an In-Service Engineer is he shared, “it’s the capping ceremonies and weekly graduations. It’s a humbling experience to know I impacted them on their journey to serve our country.”

Before the COVID-19 Pandemic, trips to the fleet were offered throughout the year. Commanding Officer, Capt. Dan Covelli and Executive Director, John Meyers, SES, championed efforts to start the program again.  Covelli shared, “I am excited to see the positive outcomes from striking up this program again. It’s important for teammates to see how their work affects our number one customer, the Fleet.”

Trips to meet the fleet have numerous benefits. Primarily these trips seek to bring awareness to NAWCTSD teammates who do not have the opportunity to interact with the Fleet regularly. Teammates were nominated by their supervisors and selected to attend. “Looking to the future, we have a trip to Norfolk and Mayport in the works,” said Eddie Johnson, Career Development Branch Head.