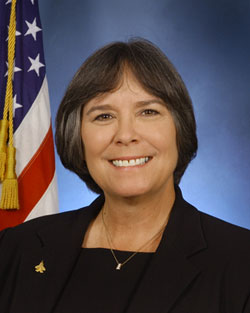 It’s pretty rare for young people to know exactly what they want to do when they grow up. Sometimes they don’t even make that decision until they are entering college, or even halfway through college. But for Maureen Bergondy-Wilhelm, she knew from a very early age that she loved science and wanted to be a scientist.

Bergondy-Wilhelm loves to golf and when on the course she doesn’t think of anything else but golf. “There probably is a science to golf, but I have yet to figure it out!”

Bergondy-Wilhelm, a self-proclaimed Navy brat, is the Director of Research and Technology Programs at Naval Air Warfare Center Training System Division (NAWCTSD), and one could say she’s living out her dream.

When Bergondy-Wilhelm was only in fifth grade, she had the opportunity to take part in a special STEM program, one of the first she can remember hearing about. It was at Holy Names University near her then home of Alameda, Calif., and because her mother was taught by the dean of the college when she, herself, was in high school, Bergondy-Wilhelm was given special consideration to attend the program and was one of the youngest to take part.

“For many weeks during the summer, I would go to a college campus, study in a college classroom, use college lab facilities and study entomology,” Bergondy-Wilhelm said. “I would study the bugs’ biology, collect and identify different species, and do dissections. It was my first big experience with real science. After that, I knew I was going to be a scientist.”

Bergondy-Wilhelm earned her undergraduate degree in Experimental Psychology from San Diego State, and studied Neuroscience at the graduate level at Vanderbilt University. “I began college with the goal to earn a double major in biology and chemistry and to attend medical school,” Bergondy-Wilhelm said. “But I decided I didn’t want to treat people who were sick but instead, study the science that is behind it. I switched to experimental psychology because I really loved the research side of it, and trying to understand the brain’s control of behavior.”

Most of her jobs during college were in the academic area. So after completing graduate school, while on spring break in Florida visiting her parents, Bergondy-Wilhelm interviewed with NAWCTSD (then known as NTEC). When she was offered the job and the opportunity to work in research, something she truly loved, she jumped at it.

Next year she will celebrate a 30-year anniversary working at NAWCTSD, where she began in the areas of electronic warfare and artificial intelligence. A lot has changed during her tenure, and she noted that one of those things that has changed significantly, both in ability and in size, is computers.

“We have so much capability, things we couldn’t even imagine, although I shouldn’t say couldn’t imagine,” Bergondy-Wilhelm said. “We imagined a lot of things. Interestingly, the distributed simulation capability we have now is what we talked about in the early 90’s, but no one would believe it was feasible when we wanted to study it.”

During that time, for several years, Bergondy-Wilhelm and her colleagues were given the opportunity to go out and observe Carrier Air Wings at the Fallon Naval Strike and Air Warfare Center. They wanted to understand what the Carrier Air Wings did, how they trained and any of the performance issues, so they could better appreciate the complexities of how a distributed, diverse team worked.

These observations began to help them understand the problems and challenges, she explained. “If everyone didn’t have the big picture at the proper level, it wasn’t going to be successful. We needed to understand how teams come together, how they are formed and practice together. And while they’re practicing together, what kind of mistakes are they making? It wasn’t about learning the stick and rudder skills,” she said.

“In the 90s and early 2000s, there wasn’t a lot of opportunity for team training due to the costs and logistics of bringing large teams together for live events, and the problem still exists today,” Bergondy-Wilhelm said. “But now the technology is getting there and people are actually coming to us and asking for help with this: determining who and what to connect, what missions or skills to train in distributed simulation, what levels of fidelity are required, and what methodologies are needed.”

Armed with the information they collected, the researchers were then able to influence the direction of the Navy in regards to the acquisition of simulator systems through the Navy Aviation Simulation Master Plan developed in 2002. “As a Navy, we are doing a much better job now thinking big picture and big mission,” Bergondy-Wilhelm said. “Integrated war fighting capability vision was what we were trying to reach on a smaller scale back then.”

For Bergondy-Wilhelm and her team, it’s all about building the science and technology that can be transitioned to the fleet to improve their training. “The important part is that it’s built on science, not just the science of learning, but the science of learning and human performance,” she said. “Through the lessons learned about how humans perform and how teams perform, as well as learn, we begin to understand what types of skills we need and how to build those skills.”

Once the performance gaps are identified, they can decompose what needs to be learned and trained, and then build the program. She said those two pieces are very important from the science side.

“We have an array of brilliant scientists and engineers here who get the opportunity to rapidly prototype and test something,” Bergondy-Wilhelm said. “The times I feel happiest are when we can bring those two together to address a problem because it’s usually a more comprehensive solution to a problem.”

“I’m most satisfied when we produce science and technology that helps build the science base so it can be shared; those generalizable lessons about how people perform and how they learn,” Bergondy-Wilhelm said. “Most often it’s the lessons learned from science and technology, and the validated guidelines and empirically demonstrated principals that come from it, that should drive how we develop and buy our new systems.”

“To me, that is what will make us successful and make people come back us.”