NAWCTSD’s Hill to Retire at July 16 Change of Command 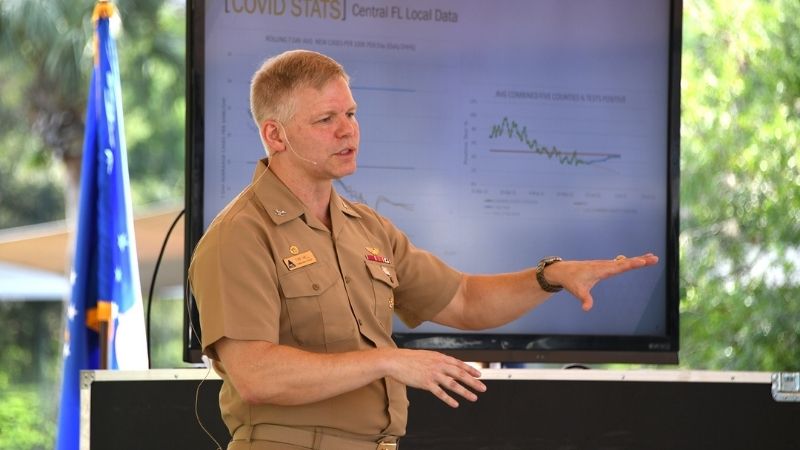 On Friday, July 16, Capt. Timothy “Octa” Hill relinquishes his command of Naval Air Warfare Center Training Division (NAWCTSD) and Naval Support Activity Orlando, and retires from the U.S. Navy after 29 years of service. Hill came to NAWCTSD in May of 2016 to serve as the executive officer (XO) and became commanding officer on Nov. 2, 2018.

“My time here started by taking the first six months to listen to folks,” Hill remembered. “I wanted to better understand their pain points and where they thought we weren’t as prepared as we needed to be for the future. That led us to update our strike plan, which was due to be evaluated, and that more or less set the framework for what we have been doing since.”

Since executing the strike plan and reviewing it as “the truth changed over time,” they’ve made some checks here and there to stay on what they thought the strategic plan needed to be. “Everything we’ve done in the facilities with refreshing all the cubicle furniture and increasing our classified space, and that kind of stuff, all the way to some of the stuff with processes – were all things in the strike plan.”

He also said there were some major opportunities that allowed for them to accelerate or tweak their path, like when NAVAIR decided to do the mission-aligned organization change. “That was a pretty good wake up call to look at ourselves and take advantage of that empowerment to do something different in the organization,” he said.

It was a chance to restructure their organization, and also to seize some opportunities they’re just starting to realize in terms of changing processes to make them more efficient. “That’s a place where industry can help, and has helped,” Hill said. The command will keep doing more of that. Certainly COVID has been a bit of an opportunity as well, particularly as it relates to our tools, and reimagining how we work.“

A lot of great things have happened under Hill’s leadership, but one accomplishment he is most proud of is the work his team has done with the Team Orlando partners to establish the Central Florida Tech Grove.

Coming from an accelerated acquisition program, Hill said he’s a big believer in “speed to the fleet,” the notion that we’re in a peer competition now and the way to stay on top is to deliver capabilities faster and improve the knowledge across the enterprise. And when Tech Bridge first came to be in 2019, they wanted to sign up as quick as they could. Turns out their Tech Bridge membership came with a gift.

“We had a place and a pretty crisp vision,” Hill remembered. “We wanted all the Team Orlando players to be a part of it, but we also started understanding that we, the government, shouldn’t be running it because it would be too constrained. But we didn’t know how to make that happen.

“And so the gift that we got from Tech Bridge was really the ‘how’: how could we achieve the vision we had almost a year in the making? Bang! We figured out the PIA [partnership intermediary agreement]. We wrote it and the rest is history.”

The PIA is between NAWCTSD and the University of Central Florida Research Foundation. As a federal lab, NAWCTSD is the only Team Orlando member able to participate in a PIA, but through a memorandum of agreement, NAWC operates as a group for the Team Orlando partners with regard to governance, but NAWC is the executive agent back to the UCF Research Foundation.

“I am so proud of it because I think it’s going to be game-changing,” Hill said. “We are not going to see the full impact for five or 10 years. But when we do, we’re going to step back say, ‘Wow, how did we do that?’”

What’s in store for the Team Orlando of the future? Hill believes that it’s the continuation of growth which successfully continues along the path to make this “thing of choice” the norm. Where the collaboration isn’t only on paper, but it’s second nature for someone on the working level to reach out to their counterpart in the Army or the Marine Corp to ask if they’ve done this before, because maybe there is something to leverage.

“Are we at that aspirational stage where it’s the first thing one our IPT [integrated product team] members does when they get a new problem?” Hill asks. “No, we’re not there yet. But we’re a lot further along the path than what we were in 2016.

Hill believes that Tech Grove is going to facilitate this environment and allow the team to reach this aspirational stage, so that the first thing someone will think about when they’re in a lab or in an integrated product team with a hard problem, is to reach out to their cross-service counterpart to see if they’re working on the same problem.

He added that all the services are doing the same thing in LVC and that others are doing similar things to what they’re doing in Ready, Relevant, Learning.

“We need to talk at the program team level and at the lab level, and that sort of thing,” he said. “Or we’ll spend money in the wrong places, and go a lot slower than we should be in terms of getting capability for different service warriors out there. And we’re not doing what we should be doing if we don’t focus in that direction.”

This assignment ends Hill’s Navy career; he’ll retire on July 16 after 29 years. He’s learned from every assignment, and said that every one of his tours has changed him in some way, whether it was the learning, the people, or the situations that impacted him.

“A whole bunch comes to mind, but hands down, my absolute favorite assignment was my squadron command tour,” he said. “I was the CO of a strike fighter squadron in combat in Afghanistan and Iraq. For every naval aviator, that’s the pinnacle. In fact, some admirals I’ve known who have done that and gone further would agree. It’s never the same — you’re a has-been after that!”

One of the things Hill said he learned early on and was hammered home was to preserve your decision space. “This has served me pretty well as I’ve moved through program offices and here at NAWCTSD,” he said. “Anything you can do to buy yourself a little more time to make a decision, it’s going to be a better decision.”

That mindset is especially important in an aviator’s world. “It’s a dangerous business, but it ramps up another level when you go out to sea,” he said. “In that particular squadron, we did it really well. We won the Navy safety excellence award that year as the tactical operational unit that best exemplified the Navy’s safety culture. We brought everybody back. We brought all of our airplanes back and they were all intact. Not everybody can say that every time, and I’m glad we were able.”

Hill leaves NAWCTSD in good order and good hands, with Capt. Dan “Stuckey” Covelli stepping in as commanding officer. He also leaves knowing that Team Orlando is moving in the right direction, with Tech Grove up and running, and a stronger, ever-growing partnership with industry.

“Any time that anyone comes in and visits this place for the first time, they step back and say ‘wow,’ Hill said. “Where else do you find all four services, hopefully soon to be five, with space, with the same mission, and all with our industry base largely surrounding it? That kind of mass is special and that to me is the importance of Team Orlando.”

Nurturing that ecosystem, Hill pointed out, is important to continued growth, and that industry’s part is critical. “Industry has done a great job with this,” he said. “They have aligned to our DoD objectives and they’ve invested IRAD (independent research and development) money for pretty good flash to bang on things we wanted. That’s not an accident. It’s a great feature of Team Orlando.”

He also explained how fundamentally the government oversees most of the work they do with industry. “I’m a big believer that the people closest to the work know best how to get that work done and if we are doing something in our oversight role that is sub-optimizing that work, we need to know it.”

They can’t always change it because of existing rules, but if their eyes are open about it, they can perhaps find an opportunity to do better. “That’s the piece I think we can continue to do better; between us in that open relationship we have with industry and our academic partners, for that matter,” he added.

Hill said he looks forward to sticking around and being a part of the ecosystem from a different side. “I’m not foolish enough to think it’s just the nature of Orlando to wrap your arms around somebody when they come in from out of town. I’m absolutely sure that a part of the warm welcome we received has to do with the position that I was in. And I’m so thankful to everybody for their role in that, especially as it relates to me and my family and the welcome and growth we’ve had here so far.”

“I’ve enjoyed the partnerships with our industry and academic teammates, as well as the other commands,” Hill said. “It doesn’t seem that it’s rocket science, but it must be because nobody else does it.”