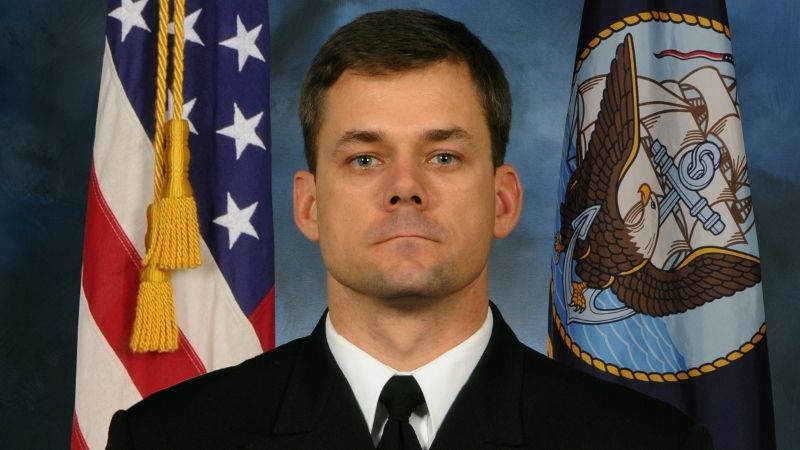 When the Naval Air Warfare Center Training Systems Division (NAWCTSD) conducted its change of command in July to welcome the new commanding officer, Capt. Covelli, the change also brought the addition of Capt. Jerin “Tim” James, the new executive officer. James is no stranger to NAWCTSD and Team Orlando, having previously served as the military deputy director of Aviation Programs, Cross Warfare Programs, and program manager of Ready Relevant Learning, during his time in Orlando from 2015-2018.

James spent the early years of his childhood in Houston, and then moved for his middle school and high school years to Nacogdoches, Texas, or the “big city in Nacogdoches County,” as he calls it. Today, he still considers Texas home because he’s been in the Navy since leaving Nacogdoches, and hasn’t been in one place long enough to put down roots.

An Eagle Scout, James certainly didn’t lack discipline or ambition, and for his Eagle Scout project, he planned a county-wide Emergency Drill, based on a train derailment. The event included ambulances, the hospital, and even moulage for the “injured people.”

When James shared his plans for the future with his dad, which included him attending Harvard and becoming a doctor, his dad gently reminded him that the costs for that plan could be a bit prohibitive and asked his son, what was plan B?

As it turns out, plan B wasn’t so bad. With some natural influences from his dad, who was a private pilot, and a step-grandfather retired from the Air Force, he already had an interest in aviation. James applied for the Air Force Academy summer program and was accepted. And then, before he knew it, he had also been accepted to the Naval Academy “Summer Seminar” too. So, he attended both.

The camps are quite competitive, just like the academies themselves. “It’s a compact experience to not only let you see what you’ll experience, but it also gives the schools the opportunity to know if someone has what it takes to succeed,” he said.

It wasn’t so much the camps that swayed his choice, but the people. “All the cadets at the Air Force camp told me to go ROTC, and have fun at a ‘real college’,” he said. “But the Naval Academy cadets were the exact opposite. They wanted me to come there. It was that experience that made the decision for me.”

That decision has taken James to many destinations and provided him with a variety of experiences during his Navy career that are sure to impact the work he does at NAWCTSD moving forward. One of those experiences was with Special Operations Command, where he spent 3.5 years, a tour he considers one of his most impactful.

His first year he did all classified rapid acquisition; his second year he was executive officer for James “Hondo” Geurts, who recently retired from his position as Under Secretary of the Navy; and his final time spent at SOCOM, he was the program manager for all the command’s Unmanned Aerial Vehicles (UAV).

“It’s very impactful getting to see how acquisition can be done quickly, because if you grow up in the system and nobody challenges the status quo, then you begin to believe that,” James explained. “Understanding that it can actually go in a different direction by becoming the expert, knowing what risks you can take, and what corners you can cut given the situation. It was a great experience.”

He had a lot of responsibility — the “job was incredibly pressurized.” With only 550 people in the entire acquisition workforce, they did $3 billion of work. “That is the example of truly delegating to the lowest level,” he explained. “I had more authority and budget control as an 04 at SOCOM than I did as an 06 at NAVAIR. They have to squeeze everything they can out of every employee, so a lot of things fall off the table, but usually they are the lowest priority and the lowest risk,” he said.

“I wouldn’t say that everything is done to perfection; it’s done to good enough. Speed is really the essence of SOCOM,” he said. “You’ve got to turn inside your enemy’s ability to come up with new products or solutions. Speed was usually the top requirement.”

With all that pressure, James joined the Jump Team, and would parachute into sporting events, air shows and parades two weekends a month. “That was something fun I did at SOCOM that helped relieve the stress — for me. It added stress to my family,” he admitted. And the question everyone asks, “Why would you want to jump out of a perfectly good plane?” “Most jump planes aren’t perfectly good,” he joked. “You’d probably rather jump out than try to land it.”

Upon his return to NAWCTSD, his goals are the skipper’s goals. “My emphasis is reaching those goals at speed, stemming largely from my SOCOM roots,” he said. “At a warfare center like this, every day that it takes us to get something done is a day the fleet doesn’t get it, so another person goes out with old training,” he explained. “It’s another day we have to charge salaries against it, so it’s more expensive, and it’s another day we’re not working on the next thing.”

“Speed is like a triple kick to the gut,” he said. “If you take a long time, there’s a lot of impact that many individuals don’t see.” But when we’re all aligned, we’re knocking down things quickly, and we can get to things that people aren’t paying attention to because they are trying to get through their own individual programs.”

“We’re going to be cheaper and faster for the Sailor,” James promised. “I want to treat speed like a true requirement – like a technical requirement. We are really good at getting the technical right. It’s easy to treat speed as something you can trade off. I want to flip that on its head.”

Echoing the priorities of the Skipper, James plans to focus on NAWCTSD employees. “We have a stellar workforce here and I want to make sure they’re being properly recognized, motivated, and retained,” he said.

Equally important, he’s wants to ensure the warfare center is going where the Navy is going. “If you look at the biggest programs in the Navy, we are in some of those to some degree, but we might not be the provider of choice for all of them,” he explained. “If we want to be the Navy’s provider of choice for training, then we should be looking at some of the newest, most enduring, and most impactful programs, and be involved with those.”

One example he shared was a new approach that NAWCTSD piloted regarding their Requests for Proposals (RFP), all part of the effort to minimize delay impacts to the fleet, which he says is key to operations. This tech refresh moved from the normal handful of evaluation factors with dozens of pages required in the RFP to one factor and a limit of 15 pages.

“We can simultaneously help ourselves by taking less time to create an RFP and less time to evaluate an RFP, and in the middle it takes industry less time to respond to an RFP,” James said. “That’s just the contracting phase; we’re going to have to look at different areas to improve hiring speed and other things. It’s really easy to keep asking for more data to try and get everything perfect, but you’re always sacrificing time. We have to find the right point to make that risk-based decision and as leaders, we need to reach down and be comfortable with less than crystal clear knowledge of the future.”

Back in Orlando, as part of Team Orlando, James notes that the interaction that NAWCTSD has with industry is definitely different than most places. “We have a lot better relationship with industry,” he said. “That is huge. The co-location of all the services is obviously great. We can learn from each other and not double spend on the same path, or we can pick up an effort further down the road than we would have.”

He also added that the support received from local and state government is incredible. “We probably wouldn’t be here if it wasn’t for everything that Florida has done for Research Park,” James said. “It would have been an easy to decision to do something like BRAC if the state didn’t build for us. All that combined, we end up having a more dollar to square foot impact on both DoD and the state than most other places. We now stand out as a much bigger value proposition because of all of that.”

James said that NAWCTSD can’t do everything. “But we should be doing things that require the science of learning, or that poise us for success in the future. We want people to come to us, but we have to pull our own weight. We can’t expect the Navy to force people to come here, we need to earn it.”