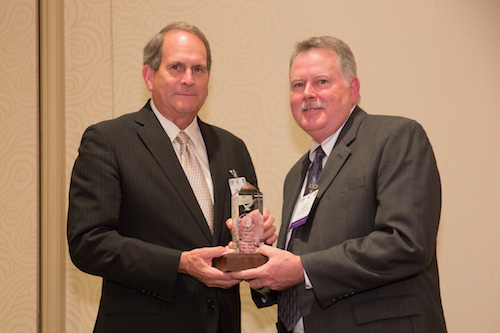 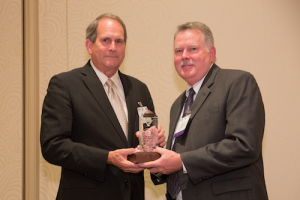 National Training and Simulation Association presented its annual modeling and simulation awards, as well as the Governor’s Award for Lifetime Achievement for modeling and simulation, at the NTSA M&S Awards Dinner at the Hyatt Regency Orlando on Tuesday, Nov. 20. NTSA president RADM James Robb, USN (Ret) presented awards to a diverse group of teams and individuals from the US Air Force, US Navy, US Army and industry.

One of those awardees, Team Orlando’s Rob Matthews, Deputy Technical Director for the Naval Air Warfare Center Training Systems Division, was recognized for a lifetime of achievement in M&S excellence. From his days as an enlisted sailor to his current role as a senior civilian leader, the imprint he has left on the MS&T landscape is as extensive as it is varied.

“We’re so thrilled that Rob Matthews was awarded the Lifetime Achievement Award,” said Diana Teel, Navy Principal for IITSEC. “Over his 38-year career, his influence on the modeling and simulation industry was not only Navy-specific, but has reached across the other Services, as well as our industry and academic partners. He has been passionate and driven, and has given his heart and soul to our industry. He is extremely deserving of this honor.”

Matthews was recognized for this unending commitment to advancing M&S during his long career, and for the enduring legacy and impact his wide-ranging and visionary contributions will have on the Navy and on the MS&T communities. Friday, Dec. 16, a retirement ceremony is being held for Matthews to recognize his long service to the U.S. Navy.