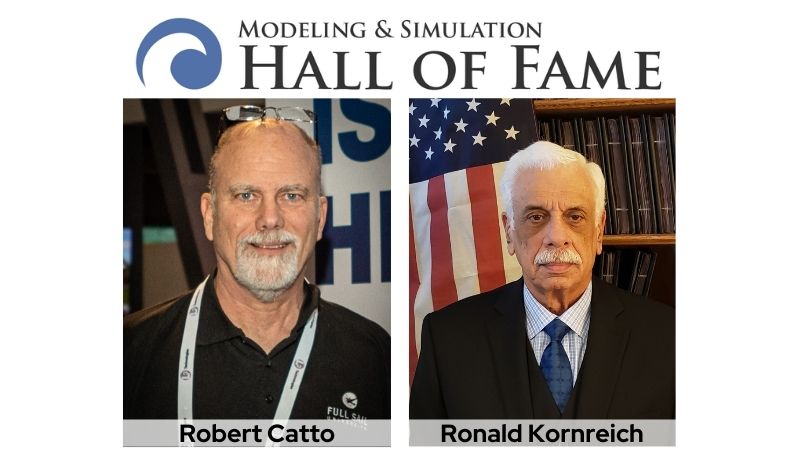 The National Center for Simulation (NCS) announced the selection of two new members for induction to the NCS Modeling and Simulation Hall of Fame. Robert Catto, Full Sail University program director for Game Studies & Simulation, and retired U.S. Air Force Lt. Col. Ronald Kornreich, owner and senior consultant for Adaptive Simulation Consultants, were selected for their lifetime commitment to the advancement of modeling and simulation technologies.

This year’s honorees will join the 2020 awardees for induction during a ceremony at the Orange County Convention Center in front of the NCS Wall of Fame on September 14. The 2020 ceremony was postponed due to the pandemic.

“We’re pleased to add Robert Catto and Ronald Kornreich to the list of prestigious MS&T pioneers and achievers,” said George Cheros, NCS president and CEO. “It will be an honor to induct them and the 2020 selectees to our Wall of Honor at the convention center.”

The Hall of Fame, including this class, is made up of 34 distinguished individuals from varied disciplines and eras, all of whom have left a legacy in simulation for future generations.

During Catto’s over 25-year tenure at Full Sail University, the institution has grown in its educational and employment opportunities in the emerging technology space and has been a driving force behind the growth of emerging technology and game studies education. In the late 1990s, Catto authored several degree programs at Full Sail including programs still available to date, such as its Bachelor of Science degrees in Game Development, Game Design, Game Design Master of Science, Simulation & Visualization Bachelor of Science, and Computer Science. Additionally, he pioneered the visualization of numerous emerging technology facilities at Full Sail including its game development game studio (Blackmoor Studios), as well as the FabLab, AR/VR Lab, and Simulation Lab.

Before joining and helping to mold Full Sail University into what it is today, Catto developed the first computer technology education program in the state of Florida in 1990 at University High School, a local Orange County school.

Known as the “Godfather of VR” by the Full Sail University community, Catto has made great strides in the VR and simulation communities. Throughout his 30-year career, Catto not only developed programs at the University but also encouraged and educated the next generation of modeling and simulation professionals at the high school level.

As the Command lead, Kornreich was responsible for the modernization of ANG flight and ground training simulators including Distributed Mission Operations (DMO) high-end training capability required for the modern Air Force. Widely acknowledged as the “Father of DMO in the Guard,” he established the Distributed Training Operations Center (DTOC) in 2003.The DTOC is now a world-class center of excellence providing thousands of distributed virtual training events to the USAF, other services, and coalition partners. Kornreich developed a dual-track process for the acquisition and modernization of modeling and simulation systems from the very robust, high fidelity simulator to lower-end trainers. Partnering with Air Force Research Labs, technology centers, and industry, he deployed training systems with cutting-edge technology at a fraction of the usual program cost and schedule. Under his direct management, the ANG invested over $250 million in the acquisition of new training systems.

As an experienced pilot and aerospace engineer, Kornreich not only managed acquisition programs but was also instrumental in the design of many of the training devices which are still used today for essential training to the Warfighter.

The 2020 honorees that will join the 2021 inductees at the September NCS Hall of Fame induction ceremony are: Dale P. Bennett, a retired Lockheed Martin executive who was a driving force for reinventing the way simulation was used; Dr. Pamela Boyers, associate vice chancellor for clinical simulation and assistant professor of surgery at the University of Nebraska Medical Center; Dr. Charlie Hughes, University of Central Florida Pegasus Professor and founder/co-director for UCF’s Synthetic Reality Laboratory; and David L. Peters, co-founder of Diamond Visionics, LLC and visual systems pioneer.

The M&S Hall of Fame began in 2014 in partnership with the Orange County government, including the Office of Mayor Teresa Jacobs and the Orange County Convention Center. Each year, an induction ceremony is held at the Orange County Convention Center South Concourse in Orlando, Florida, the home of the NCS M&S Wall of Fame. The principal objective of the Hall of Fame is to honor and recognize individuals who have significantly contributed to advancements in M&S. A nominee’s field or area of achievement is not limited only to defense. Significant contributions in other areas (e.g., medical/healthcare, technology, entertainment, transportation, education, homeland security, gaming) are also considered.

For more information on the Hall of Fame members, visit National Center for Simulation.