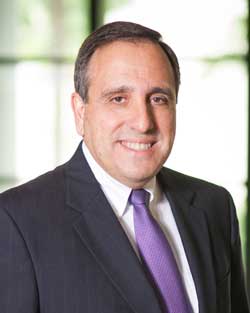 
George Cheros moved to Florida with his family when he was only three. He loved sports growing up as a kid and played all the usual ones: football, basketball and baseball. But once he entered high school, the competition changed somewhat, especially with basketball. His high school probably had the best team in the history of the state of Florida that included future NBA player Darryl Dawkins. Cheros made the obvious choice to wisely switch sports and joined the soccer team, where he and his team won the championship during his junior year.

Cheros is the Chief Operating Office for the National Center for Simulation, the organization recognized as the voice of modeling, simulation and training, focused on uniting and connecting the MS&T community. A graduate of University of Central Florida (UCF) with a Bachelor of Science in Accounting, he took a part-time job with an accounting firm prior to pursuing his Master’s degree. After a few months of audit and tax work, he decided that being accountant was not what he envisioned, so he changed course and earned his Masters in Business Administration in Finance and Marketing from UCF.

Cheros’ first position was for General Foods Corporation (Kraft Foods) as a plant cost analyst at a Birds Eye orange juice plant in Winter Haven, Fla. A year or so into his job, he was asked into the Plant Manager’s office. ‘We have good news and bad news,” they told Cheros. “The bad news is we’re selling this business. The good news is you’re going to help us do it!”

Cheros led a team that made the Winter Haven plant a satellite operation of their Dover, Delaware plant, (the largest food plant in the United States), in preparation for the sale of the business. For the next year and a half, he commuted between Florida and Delaware, preparing for the eventual sale. With that experience under his belt, after the sale, he was brought into the corporate headquarters office in White Plains, N.Y., where he eventually moved over to the marketing side in product management and new business development.

As much as Cheros enjoyed his job and the great benefit of only being 45 minutes by train from the city that never sleeps, he was an only child, and as his parents were getting older, he felt it was important to begin working his way back to Florida to be closer to them. “As luck would have it, I got a call out of the blue from a headhunter that Red Lobster was looking for a Finance Manager,” Cheros explained. “I came to Florida over the Thanksgiving holiday and met with them, and soon after I received an offer.”

They called him late one night and the next day happened to be his division meeting where he received the General Manager’s Award, recognition only given throughout the division twice per year. “I decided to wait to tell them I was leaving until after the first of the year,” said Cheros. “When I told my general manager, who is one of the smartest people I’ve ever worked for, she told me she wasn’t happy with me.” Cheros said he explained to her his reasons for leaving, and she acknowledged that he was leaving for the right reasons, but teased that she was still not happy with him!

His move brought Cheros to General Mills (prior to the Darden spinoff) and Red Lobster, where he started as the Manager of Corporate Planning, then the S.E. Division Controller and finally Director of Strategic Planning. After almost 15 years in the two Fortune 100 corporations, he had a desire to work for himself, and was a founding partner for a consulting/venture organization that strategically partnered with midmarket companies to solve complex business issues. In that role, he worked with a wide variety many industries ranging from biotech companies to a watermelon farm operation. While seeking out information for a client who did simulation work in Europe, he was referred to NCS and Lt Gen (ret) Tom Baptiste. They met a few times, and continued to keep in touch.

“One day, Tom emailed me and said that he was looking to fill a position and if I knew of anyone who might be interested, to please forward them the information,” Cheros said. “I told him that I was interested!”

“I was tired of traveling, and the time it took me away from wife, Lynda and my daughter,” Cheros said. “It sounded intriguing to come back and be near the University,” he continued. ”I am patriotic and had never done anything with the military in my whole life. The industry was fascinating and had a lot of opportunity – and I still think it’s untapped as far as its potential.”

Cheros said the job appealed to him in a lot of ways, and that everything he’s seen here have been surprises for the better. “Everybody I’ve worked with has been very proactive. They really care and I like seeing that,” Cheros said.

“I view my role as someone who can take the burden of running this place off his (Baptiste) plate so he can do what he does best – promote the industry,” said Cheros. “Tom’s background and his stories, and how he represents this industry is great. He’s the perfect spokesperson.”

Cheros said he didn’t know exactly how big the Modeling and Simulation community was until he got to NCS, nor the potential. “Probably the biggest surprise for me was how well all the groups work together,” Cheros said. “They all have their challenges but coming in from the outside, I did not expect to see such great synergy.”

NCS is happy to be a part of the effort, and leading the Metro Orlando Defense Task Force, to help solve the office space problem for the military. Phase two, according to Cheros, is pursuing a true Center of Excellence for MS&T. “That involves a building and making it the true showcase that it is and I see us leading that effort,” he said. “Then you become the National Center for Simulation.”

Cheros said the other things NCS is focused on is helping the industry work together to take this technology and expand it outside the military more than it is now. “We’re starting to see a lot more of that with digital gaming and the entertainment industry, as well as Medical City,” he said. “That’s all going to continue to evolve, and it’s a huge opportunity to showcase all of that,” Cheros added. “We have all of the pioneers who have gotten us to here, now we need to build on their hard work going forward.”

Finally, he stated, “our STEM education projects are so important to foster the development of our future workforce and develop solid career opportunities for the young people of Central Florida, which is something I can relate to having a teenage daughter.”